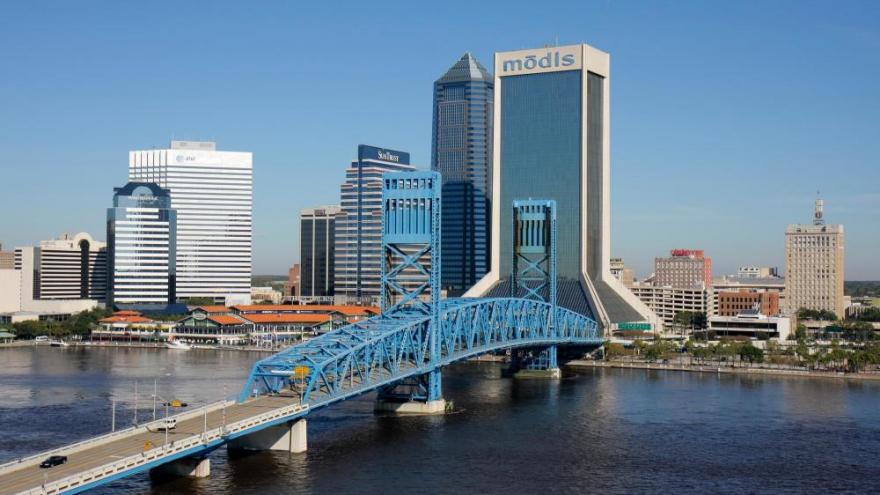 (CNN) -- The surge in coronavirus cases in Florida is creating fresh headaches for Republicans who are scrambling to raise money and quickly organize a political convention in the state after President Donald Trump abandoned plans to accept his party's nomination in Charlotte, North Carolina.

Florida, the site of next month's scaled-down convention, is now one of the nation's hotspots for the virus, raising concerns about how many Republicans will travel to Jacksonville and risk transmission to witness Trump's acceptance speech inside the city's 15,000-seat VyStar Veterans Memorial Arena.

The quadrennial political conventions typically are splashy, made-for-TV affairs that require years of planning and tens of millions of dollars to stage. To lure donors, Charlotte's convention planners offered an array of perks to big contributors, including exclusive campaign briefings, access to luxury skyboxes and priority bookings at premium hotels.

But the pandemic has upended plans for both political parties. The Democratic National Convention Committee has scaled back its August convention considerably and advised state delegates not to plan to travel to the convention site in Milwaukee.

On the Republican side, three GOP senators -- Iowa's Chuck Grassley, Tennessee's Lamar Alexander and Maine's Susan Collins -- said this week that they would skip the events in Jacksonville. Grassley, who at 86 is the oldest Republican in the US Senate, specifically cited concerns about Covid-19. Grassley told reporters in Iowa that this marked the first time he would miss his party's national convention since he was first elected to the Senate four decades ago.

And on Monday, convention organizers announced they would test Jacksonville attendees daily for the coronavirus but did not provide details about the testing protocols. The gathering is slated for August 24-27, with Trump likely to deliver his acceptance speech on the last day if organizers stick to the original convention schedule.

Dan Eberhart, an Arizona-based oil executive and Trump donor, said he's flooded with requests for contributions from the Jacksonville organizers but hasn't committed yet.

"The world is just a mess, with corona and the economy," he told CNN. "Normally at this time, people would be jockeying over who's at what hotel or talking about who's hosting what events. I'm hearing none of that.

"This feels like it's going to be a minor-league convention."

Organizers of the event are now working to alleviate concerns among top donors who gave millions to fund a glimmering event in North Carolina. The Republican National Committee, led by Trump's anger at Democratic Gov. Roy Cooper, opted to move most of the convention events to Jacksonville, all but lighting the roughly $38 million they had raised and spent on building an event in North Carolina on fire.

At the time, Trump said Cooper was "unable to guarantee" that the Charlotte convention arena could be filled to capacity.

Republican officials note that the costs in Jacksonville are significantly lower than Charlotte. Republicans have paid $150,000 to rent the VyStar Veterans Memorial Arena in Jacksonville, compared to what one official said was "millions" for the Spectrum Center in Charlotte.

Trump said Tuesday that Republicans are "very flexible" on how they'll hold the upcoming convention amid the surge.

Between money that was pledged but not yet spent in Charlotte and new financial commitments for the Jacksonville gathering, organizers have identified close to $20 million to use for the scaled-down event in Florida, according to a person close to the host committee.

"I think it's obviously a challenge to do something in two months that was designed for a two-year buildup, but I feel confident that the (host) committee and the RNC will meet the challenge," said a source involved in the planning.

In a memo released this week, Jacksonville host committee spokeswoman Erin Isaac said "hundreds of interested businesses" in the Jacksonville area "are currently being matched with convention opportunities."

The event, she added, could inject more than $100 million into the local economy, based on past conventions.

The money issues, however, are secondary to some Republicans, many of whom are warily watching coronavirus cases spike in Florida. Sources with knowledge of the convention planning tell CNN that the search committee has been closely watching the rising numbers in Florida, including in Duval County, where the convention will be held. Planners are searching for ways to hold the convention "in a safe way," including testing anyone who comes to the convention and working with labs in the Jacksonville area to quickly test the samples.

"The RNC is committed to holding a safe convention that fully complies with local health regulations in place at the time," said Michael Ahrens, a Republican National Committee spokesman. "The event is still almost two months away, and we are planning to offer health precautions including but not limited to temperature checks, available PPE, aggressive sanitizing protocols, and available Covid-19 testing."

Aherns added: "We have a great working relationship with local leadership in Jacksonville and the state of Florida, and we will continue to coordinate with them in the months ahead."

Despite the coronavirus concerns, top Republican National Committee officials have been in Florida for weeks, and the convention's Committee on Arrangements is in the city this week.

But those assurances aren't doing much to quell concerns among Florida Republicans.

"It's impacting fundraising, creating worries about getting a crowd, and some are absolutely questioning whether it can still happen at all," said a top Florida Republican who requested anonymity to speak openly about the growing concerns.

On Tuesday, Jacksonville Mayor Lenny Curry, who serves as co-chair of the convention host committee, announced he was self-quarantining after coming into contact with someone who has Covid-19.

The mayor said he has tested negative for the virus.

New polling shows that Jacksonville-area residents are concerned about the potential of a large gathering to spread to the virus in their community. And 71% of registered Duval County voters surveyed recently by the University of North Florida said they were "very" or "somewhat concerned" about convention-related COVID-19 transmission.

A majority -- 58% -- of those polled opposed staging the convention in Jacksonville, while 42% supported it.

New coronavirus cases in Florida have increased in the past few weeks -- with the surge coming after Republicans committed to move large parts of the convention to the state to comply with Trump's demands for a traditional event, packed with attendees.

On Saturday, the state set a record for the most new coronavirus cases in a single day for any state during the pandemic, with a total of 11,458, according to data compiled by Johns Hopkins University. Total cases in the state now exceed 213,000.

And over the weekend, a top US health official issued a fresh warning, saying it wasn't clear yet whether Florida will be a safe place to host the convention.

"I think it's too early to tell," Food and Drug Administration Commissioner Dr. Stephen Hahn said Sunday on CNN's "State of the Union. "We'll have to see how this unfolds in Florida and around the country."

Last week, the city of Jacksonville imposed a face mask requirement for public and indoor locations and where social distancing is not possible, something the President has refused to do in public.