Covid-19 cases trend up again in the US, driven by the growth of BA.2 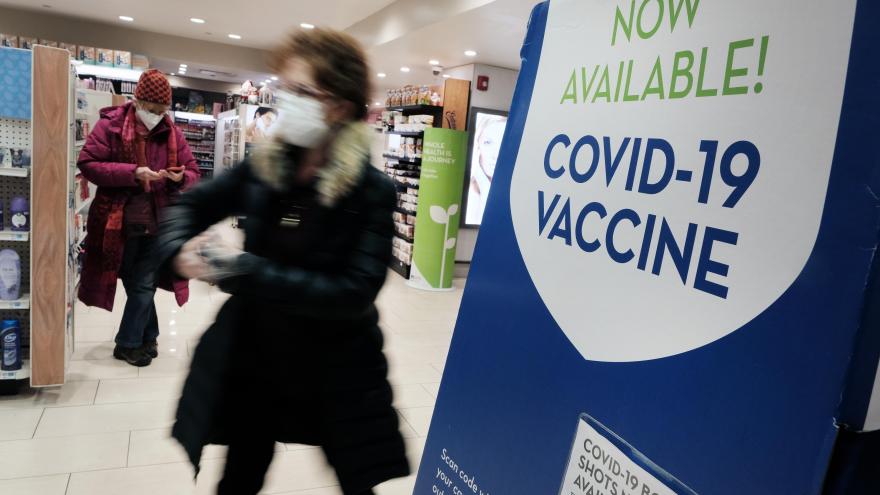 (CNN) -- Covid-19 case numbers have begun to edge up in the United States, and nearly all of them are caused by the Omicron subvariant BA.2.

According to the latest estimates from the US Centers for Disease Control and Prevention, BA.2 caused 86% of new Covid-19 cases nationwide last week.

In some ways, this feels like a familiar place. Cases are going up again. At least one major city is reinstating its mask mandate. Broadway shows have canceled some performances.

But there continue to be reasons for optimism.

Despite BA.2's near-complete takeover from two other circulating Omicron subvariants, BA.1 and BA 1.1, US hospitalizations are at record low levels, and they continue to drop. Deaths also continue to fall.

Even though those numbers tend to lag behind case counts, the US hasn't seen a steep increase in infections. Whether that's likely to happen is still an open question.

Even Dr. Anthony Fauci, director of the National Institute of Allergy and Infectious Diseases, doesn't know what BA.2 will do. As a nation, transmission has to get down to a level that's "low enough that it doesn't disrupt our population or the economy, our daily economic, workplace and social lives, which means it has to be low enough that it isn't a serious threat to the health of the nation," he says. He doesn't know if we're out of the woods.

"We are certainly seeing the beginning of a surge of new infections," Fauci said. "It depends on how high we go up in the surge, and it depends on whether the surge is associated with an increase in severe disease.

"I can't say where we are right now, because we're transitioning," he said.

Across the nation, Covid-19 cases have ticked up 24% from where they were two weeks ago, and the US is now averaging about 38,000 cases a day. This is a jump from last week, probably because Florida recently reported a two-week backlog. Even so, it's one of the lowest daily rates since July.

State by state, however, the picture is more mixed. Cases are rising in 25 states, falling in 16 and holding steady in nine others.

Cases are rising fastest in the Northeast, the region of the US that has the most BA.2 transmission.

On Monday, Philadelphia became the first major US city to announce a return to indoor mask requirements. Cases have climbed 50% there over the past 10 days, pushing the city over the threshold that triggers the mask mandates.

"I suspect that this wave will be smaller than the one we saw in January," Dr. Cheryl Bettigole, Philadelphia's public health commissioner, said Monday.

"But if we wait to find out and to put our masks back on, we'll have lost our chance to stop the wave."

New York City had been reconsidering its mask requirements for preschoolers, but with cases rising in the city, Mayor Eric Adams recently said masks would be continue to be required for the youngest children, who had higher rates of hospitalizations during Omicron than in previous waves.

Beyond case counts, which may be a less reliable pandemic metric because testing numbers have dropped, coronavirus levels in wastewater are telling a largely reassuring story.

Wastewater monitoring is considered a reliable warning of what's on the way. US numbers are trending up slightly but are still at one of the lowest levels seen since July, according to Biobot Analytics, a company that analyzes wastewater samples from across the country.

The situation with BA.2 here appears to be a departure from the one seen in the UK and Europe.

The BA.2 experience in the US looks a lot more like what happened in South Africa. In the second and third weeks of February, when BA.2 was responsible for about 88% of transmission there, cases made a slight bump up but then continued to fall over the month of March.

"I've been cautiously optimistic about BA.2 because of the trends that it's not been as exponential a rise in cases, like we saw when Omicron first emerged," said Pavitra Roychoudhury, who studies the spread of infectious diseases at the University of Washington's School of Medicine.

She said the tidal wave of Omicron that hit the US over the winter has left a lot of immunity in its wake. We're also more vaccinated and boosted as a country than we've ever been -- though health officials say we could do a lot better on boosters.

Some are heeding that warning. The pace of vaccination has roughly doubled over the past two weeks as more people seek out second boosters.

An average of about 502,000 vaccine doses have been administered each day over the past week, according to CDC data. That's up from about 219,000 doses a day on March 29, when the CDC and the US Food and Drug Administration authorized a second booster shot for people 50 and older, though the CDC isn't specifically counting second boosters.

"That might be explaining our somewhat more optimistic outlook compared to places like the UK, where there was a significant surge and it was associated with BA.2," Roychoudhury said.

Overall during the pandemic, health officials have pointed to the UK as a harbinger of things to come in the US, but that kind of extrapolation may be getting harder to do as the populations develop different types and degrees of immunity.

After a wave of cases caused by Omicron's BA.1 subvariant that peaked in January and then fell, the UK saw a second increase in cases and hospitalizations with BA.2. That wave peaked in late March, and since then, cases have been on a steep decline.

Adam Kucharski, an epidemiologist at the London School of Hygiene & Tropical Medicine who tracks infectious disease outbreaks, believes that the BA.2 wave in the UK was at least partly due to the timing of its booster campaign.

The UK began offering booster shots, or third vaccine doses, in mid-September, just a few days before the US did. But more people got them: In the UK, 68% of people over the age of 12 who are eligible for a booster dose have gotten one; in the US, that number is just 45%, according to the CDC.

Many people in the UK who got a booster in September or October still had high antibody protection when Omicron arrived.

Antibodies are the first line of defense in an infection. They act quickly to contain the spread of a virus through the body. Antibodies are highest in the first few months after vaccination and decline over time. But even after they've dropped off, the body retains its immune memory to vaccines and can gear up quickly to make more if it's infected.

Omicron was identified in late November, when many in the UK were still within the window of highest protection from their booster doses.

"I think we were fortunate that the boosters, in the short term at least, provided quite a lot of protection," Kucharski said.

People who'd had recent boosters had such good immunity that if even if they got infected with BA.1, they might not have known it because their symptoms were so mild. It was likely that they weren't contributing to transmission, Kucharski thinks, so boosters did a good job of holding down Omicron's rampant spread through the UK over the winter.

Fast-forward three months, however, and many people who'd gotten boosters as recommended were six months past their shots. Studies show that antibody levels decline four or five months after the third dose, so their protection against infection was probably much lower just as BA.2 arrived on the scene.

And now, Kucharski says, with BA.2, even the boosted group began getting "mild, mild symptoms or enough to detect that and test positive" and be counted as a case.

As immunity waned, BA.2 crept in

Whether the US will see a fresh wave of cases from BA.2 will depend a lot on two things, Kucharski said: the current level of immunity in the population and our behavior.

About half of those who are eligible for a booster dose in the US have had one, and millions more were infected by Omicron, giving an estimated nearly 95% of Americans some degree of protection against the coronavirus, according to the CDC.

But for those who have lost their immunity over time because protection from their original two-dose vaccinations have waned or because they were infected a year or more ago with an older variant, the virus might find a way to spread.

"I think if BA.2can find susceptibility, that will translate into growth in cases," Kucharski said.

But he stresses that a lot will depend on what Americans do right now.

"I think the question is what happens in the meantime, if actually booster campaigns and other things line up, then that might offset [the subvariant]. But I think based on what we're seeing a lot of countries in Europe, if there's susceptibility, either because people haven't had a booster or they had it a while ago, then that can translate into growing epidemic," he said.