Court rejects civil rights group's effort to free elephant in Bronx Zoo, ruling she is not entitled to same rights as a 'person' 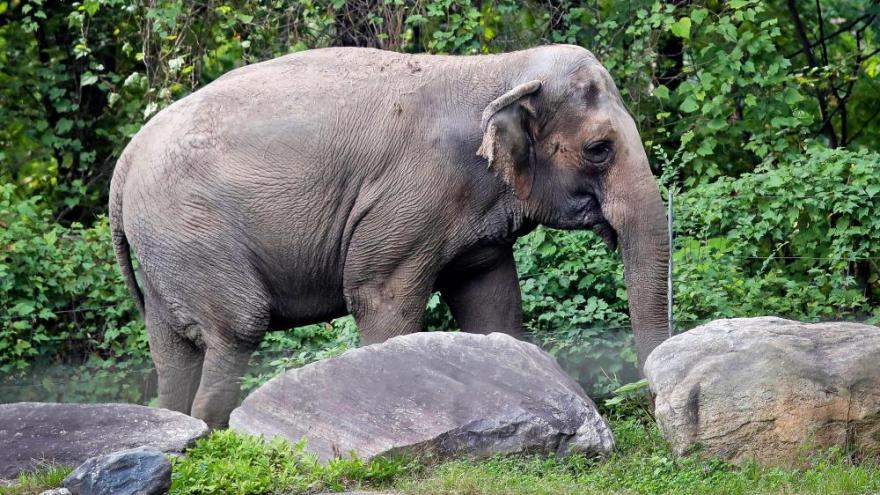 New York's highest court ruled on June 14 that an elephant at the Bronx Zoo is not a "person" and that the civil rights group fighting for her release to a sanctuary is not entitled to do so on her behalf.

(CNN) -- New York's highest court ruled Tuesday that an elephant at the Bronx Zoo is not a "person" and that the civil rights group fighting for her release to a sanctuary is not entitled to do so on her behalf.

The elephant, named Happy, has been in captivity since she was one year old and has been kept at the Bronx Zoo for the past 45 years, the ruling states. The group fighting for her release, the Nonhuman Rights Project, has alleged she does not have "sufficient direct social contact" after multiple of her elephant companions were euthanized, according to the ruling. After the Bronx Zoo announced it would end its captive elephant program, Happy and one other female elephant are the only elephants who remain at the zoo and are housed separately due to their "hostile relationship," the ruling states.

"While no one disputes the impressive capabilities of elephants, we reject petitioner's arguments that it is entitled to seek the remedy of habeas corpus on Happy's behalf," Chief Judge Janet DiFiore wrote in the ruling. "Habeas corpus is a procedural vehicle intended to secure the liberty rights of human beings who are unlawfully restrained, not nonhuman animals."

The Nonhuman Rights Project advocates for the legal personhood of "autonomous, nonhuman animals" such as great apes, elephants, dolphins and whales, according to its website. The group has said that Happy is an "extraordinarily cognitively complex and autonomous nonhuman" and argues that she should be recognized as a "legal person" with the right to bodily liberty and that she should be immediately released from her "unlawful imprisonment" at the Bronx Zoo.

Lauren Choplin, a spokeswoman for the Nonhuman Rights Project, said in a statement to CNN that the decision is a loss for Happy, but that the group will continue its grassroots campaign to release her while it considers its next legal steps.

"At the same time, this is not just a loss for Happy, whose freedom was at stake in this case and who remains imprisoned in a Bronx Zoo exhibit. It's also a loss for everyone who cares about upholding and strengthening our most cherished values and principles of justice -- autonomy, liberty, equality, and fairness -- and ensuring our legal system is free of arbitrary reasoning and that no one is denied basic rights simply because of who they are," Choplin said in the statement.

The ruling states that while the civil rights group doesn't dispute that Happy's residence at the zoo complies with federal and state laws governing elephant care, it alleges that Happy "does not have sufficient direct social contact with other elephants" due to her living situation, but does not allege she is subject to cruel, neglectful or abusive treatment.