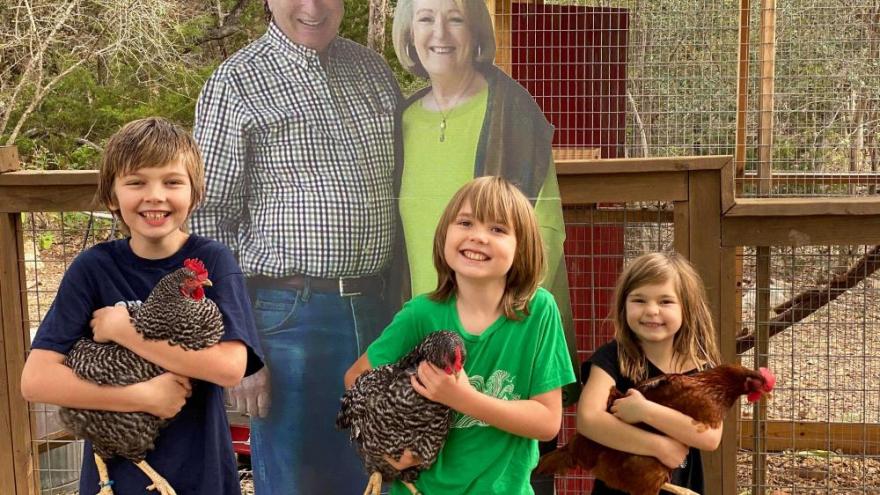 Quinton, Oliver and Clara Buchanan (l-r) have enjoyed posing for photos with the cutout of their grandparents.

(CNN) -- A Texas couple came up with a clever and safe way to be with their grandchildren over the holidays after canceling their traditional, in-person celebrations because of the coronavirus pandemic.

Missy and Barry Buchanan sent life-sized cardboard cutouts of themselves to their daughter in California and their son, who also lives in Texas.

"I just remember thinking, 'you know, I want to do something that'll be funny and unexpected,'" Missy Buchanan told CNN.

They usually spend Thanksgiving in either Texas or California and then the entire family -- including their daughter, who lives in Ireland -- gets together for Christmas.

Buchanan said big family gatherings don't feel safe this year, so she and her husband decided to stay home.

"Now that we're not going to go, what can we do to make it fun and not make it a sad time, because there's just so much so much sadness and chaos and uncertainty in the world," she remembered thinking.

Health experts have also urged people not to travel and to avoid gathering with their extended families to reduce the risk of spreading the disease.

She told her kids that a large box is on the way, but didn't give away any details that would have spoiled the surprise.

Mindy Whittington told CNN that her mom is always sending them thoughtful packages and gifts for her 3-year-old son, Noah, so she didn't think much about it.

"We weren't really expecting anything that crazy," Whittington said. "We opened it up together and we just could not stop laughing."

Her husband shot video of the moment that showed Noah jumping up and down, giggling and giving his Ama and Poppi a hug.

"It was just nice to have a moment of lightness and laughter in such an intense year and even just to remember that,hey, this is just a year, we're not all in lockdown for life," Whittington said.

She said Noah talks to the cutout, and likes to have it in his room at night when he's ready to go to sleep.

Matthew Buchanan said his children Quintin, 12, Oliver, who turns 10 next week, and Clara, 6, have enjoyed posing for photos with their grandparents cutouts in different spots around the house and out in the yard with their chickens.

He said he and Oliver "basically fell on the floor laughing" when they opened the box and saw Ama and Poppi's smiling faces. They quickly set up the surprise before his wife came home with Quintin and Clara.

"Everybody was sort of confused and laughing, and it was a funny little scene," he said.

Missy Buchanan said she didn't send one to her daughter in Ireland because she didn't really have storage space for a 6-foot-tall photo of her parents.

She said they haven't been able to see Noah since Christmas and her other grandchildren have only been able to make an outdoor porch visit because of the pandemic.

"They haven't been able to give their grandparents a hug since like March," Matthew said.

Missy Buchanan said that Zoom and other technology has helped everyone stay in touch and the family is planning to say the blessing together on Thanksgiving.

She said she's let her kids handle the Thanksgiving cooking for years, but she's going to fix a whole spread including turkey and dressing, green beans, salad sweet potato casserole and pumpkin and pecan pies.

She said she and her husband are going to be eating leftovers for a long time.

"I just think we should be in the mindset of just, trying to make the most positive thing that we can out of it because it doesn't do any good just to complain and be miserable and gripe," Buchanan said. "We can still have fun. It's just going to be a different kind of fun. And knowing that it's not going to last forever, and we all will be back together again, hopefully soon."