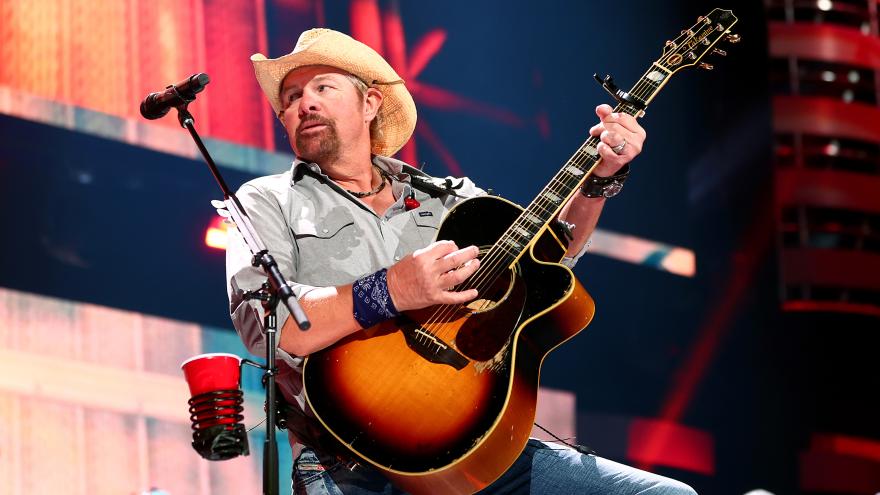 (CNN) -- Country music superstar Toby Keith has announced he has been battling stomach cancer since late last year but has received treatment and plans to return to the stage soon.

In a statement posted on his verified Twitter and Instagram accounts Sunday, Keith said he was diagnosed with cancer last fall.

"I've spent the last 6 months receiving chemo, radiation and surgery. So far, so good. I need time to breathe, recover and relax," the statement says. "I am looking forward to spending time with my family. But I will see the fans sooner than later. I can't wait. -T"

According to his official website, Keith is due to play the Ribfest in Illinois on June 17.

He released his latest album -- "Peso in my pocket" -- last year after taking time out from touring due to the Covid pandemic, the site says.

In 2021, then-President Donald Trump awarded Keith the National Medal of Arts, which the National Endowment for the Arts describes as "the highest award given to artists and arts patrons by the United States government."

"Toby Keith is a singer, songwriter, musician, and humanitarian who has completed 11 USO Tours to date. He has 32 #1 singles," the National Endowment for the Arts said in a January 2021 release.

Keith, born in Oklahoma, released his debut album in 1993 and is known for hits including "Red Solo Cup" and "I Wanna Talk About Me." His 2002 song "Courtesy of the Red, White and Blue (The Angry American)," released in the aftermath of the 9/11 attacks, made him a household name.

Keith has performed hundreds of shows for US service members abroad, including in Afghanistan and Iraq, as well as at events for Presidents Donald Trump, Barack Obama and George W. Bush.