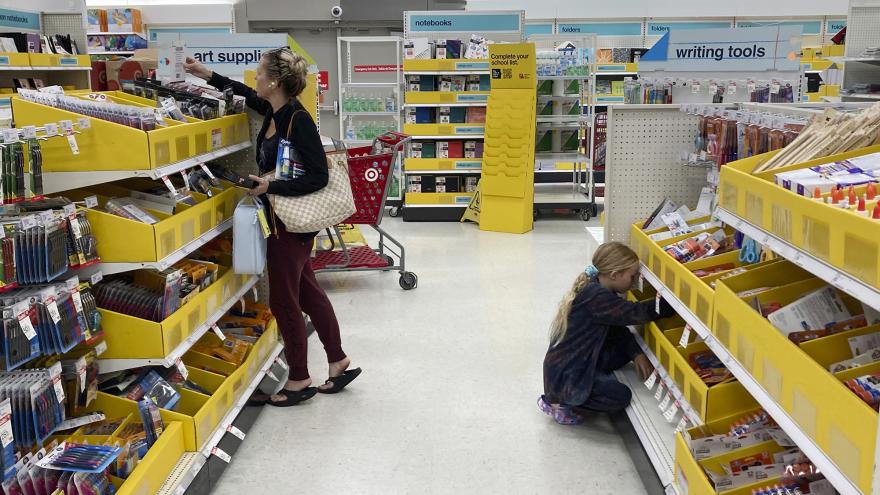 (CNN) -- As parents and teachers prepare for students to return to classrooms this fall, they're grappling with how muchmore the most basic school supplies will cost.

From glue, markers, pens and tape to backpacks, sneakers, even underwear, price tags on these necessities have jumped over the last year as inflation makes all kinds of purchases costlier.

Families may already be adjusting their household budgets to absorb higher prices, but when everything costs more, it adds up.

"We look across millions of consumers in every economic level and income bracket and no one is immune from soaring inflation in their daily lives," said Brian Mandelbaum, CEO of Klover, a consumer data company in the personal finance and commerce space. "The most impacted are those households who are living paycheck to paycheck, on a very fixed budget."

Klover, which collects consented spending data from its more than 3 million consumer users as well as point of sale pricing data, looked at year-over-year price changes for the most common items on annual back-to-school shopping lists — everything from pencils and pens to clothing and sneakers.

It found that shoppers are spending much more on school-related purchases this year versus 2021 even as the average number of transactions dropped for categories such as children's clothing, electronics and school and office supplies.

"We learned that people are going less frequently to places like big-box stores, and when they do go, they are also buying fewer items per each trip," said Mandelbaum.

He has a prediction for how the school shopping period will play out this year: "It will be longer, and might even stretch past the start of school, which is unusual," Mandelbaum said. "Shoppers will wait for prices to come down and get what they hope are better deals."

Mandelbaum noted items such as Scotch tape and Sharpies have seen some of the highest price jumps year-over-year.

For all varieties of 3M's Scotch-branded tape, the average price surged nearly 70% this year compared to 2021.

The cost of two other popular school supplies — Sharpies and Elmer's Glue — are up nearly 55% and 30% respectively in 2022.

Mandelbaum said shoppers are paying 12% more for BIC pens, too.

Elsewhere, prices for popular JanSport backpacks are about 2% higher, Nike sneakers have increased 12%, the average price for Hanes underwear is up 6.4% and TikTok-approved, Gen Z favorite Dickies pants cost 13.6% more.

DataWeave, another retail and pricing analytics firm, has tracked price changes on over 34,000 back-to-school related items by category and subcategory across Instacart, Kohl's and Meijer, a supercenter chain based in the Midwest.

As of Aug. 10, DataWeave found average price increases of 25% for low-cost school supplies like notebooks, folders, items for arts and activities, and writing materials. Notebooks and folders showed the highest jump at 32%. Among other higher priced items, lunch box prices have increased by 14% to $25 on average, while the cost of backpacks increased by 12% to $70 on average.

Newell Brands, the maker of Elmer's Glue and Sharpie pens, said that while it has set its product prices "to cover inflationary costs that we received from raw material suppliers," it has no control over what retailers charge for them. However, the company said it is not seeing steep increases in store prices for its products.

Newell also audits prices across its retail partners and has found that in the first four weeks of the back-to-school shopping period, prices for Sharpie permanent markers are up less 7% on average, prices for Sharpie highlighters are up just over 8.5% on average. The cost of its three largest Elmer's White School Glue products has risen just under 10%. Its three largest Elmer's Disappearing Purple School Glue Sticks cost 8.5% more than last year.