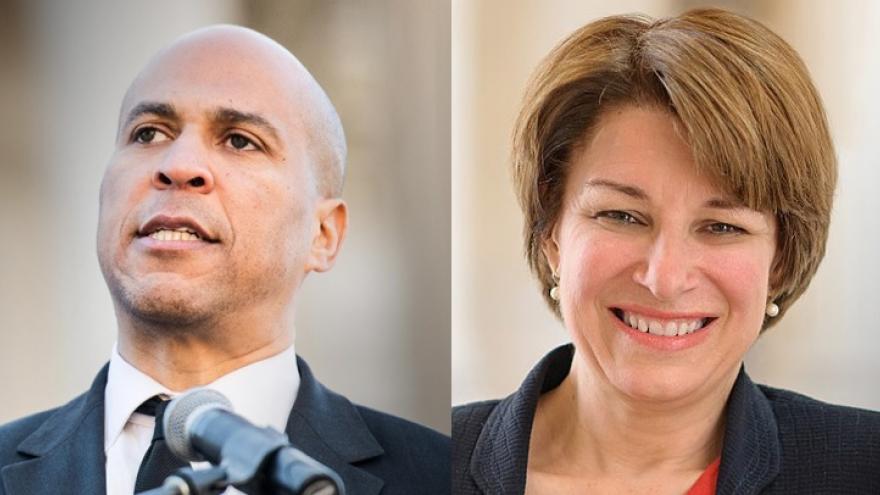 MILWAUKEE (AP) — Sen. Cory Booker will be the fifth Democratic presidential contender to campaign in Wisconsin in advance of the 2020 election.

NEW YORK (AP) — Sen. Amy Klobuchar agreed on Wednesday to become the second Democratic presidential candidate to hold a town hall meeting on Fox News Channel, and others are soon to follow.

Sen. Bernie Sanders was the first to venture onto Fox this week. His Monday town hall reached 2.55 million viewers, the biggest audience of any such event in the 2020 campaign cycle, despite not being aired in the prime time hours when most people are available.

One of Fox News' most loyal viewers, President Donald Trump, indicated on Twitter that he wasn't happy seeing Sanders on his screen.

Meanwhile, Pete Buttigieg's campaign confirmed that it is in talks with Fox about a town hall. Jenn Fiore, an aide to Julian Castro, said that campaign is in the process of scheduling one. Sen. Cory Booker also said he's considering one.

During an appearance in Fredericksburg, Virginia, on Wednesday, Beto O'Rourke said that while he disagrees with the practices of Fox News, he will appear on the network. He said he wasn't sure whether it would be on a town hall or some other program.

"I don't write anybody off in this country for their choice of cable programming," O'Rourke said.

The Democrats have had to weigh possibly angering a liberal base that holds Fox News in contempt versus reaching a large audience, many of whom wouldn't be likely to see them in action elsewhere.

Before the newfound interest, Fox News faced the prospect of watching the Democratic nomination process from the sidelines. The Democratic National Committee announced in February, and reaffirmed this week, that it would not hold any of its upcoming candidate debates on the network.

On Twitter, Trump has seemed like a spurned man. He tweeted Tuesday that it seemed "very strange" to see Sanders on Fox. Trump, who rarely complains about Fox, also said that many of his supporters couldn't get into the Bethlehem, Pennsylvania, event that was "stuffed" with Sanders fans.

Fox has said it reached out to various political and local groups in the Bethlehem area to help fill the audience for the Sanders town hall.

Besides the president, Fox News also has to wonder how the large number of his fans in its audience will take to the Democratic visits. The online activists Lynnette Hardaway and Rochelle Richardson, who often appear as commentators on Fox under the name Diamond and Silk, tweeted that it was "sickening to see Bernie Sanders on a Fox News town hall disparaging our president."

Fox did receive praise for its handling of the Sanders town hall from some unlikely sources, including panelists on MSNBC's "Morning Joe," which has been relentless in its criticism of Trump.

The Klobuchar town hall will be held May 8 in Milwaukee, Wisconsin. The hour-long event will have a similar blueprint to Sanders' session: Bret Baier and Martha MacCallum will be the anchors, and it will start at 6:30 p.m. Eastern time.