Coronavirus has halted these concerts, festivals and movie premieres 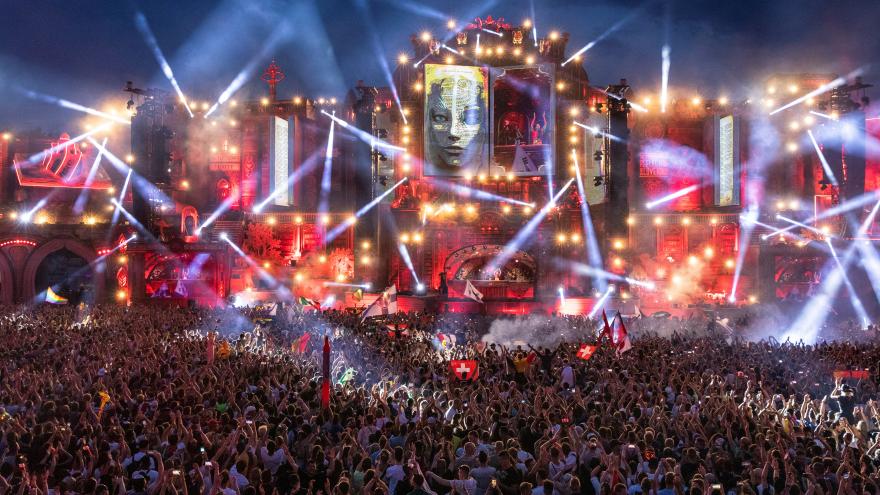 (CNN) -- As the world seeks to deal with the coronavirus pandemic, it's had an effect on entertainment.

With countries like Italy going on lockdown to try and contain spread of the virus, concerts, festivals and movie premieres are also being postponed or canceled across the globe.

The following is a list of some of what has been affected so far:

Two sources with knowledge of the matter told CNN that organizers for the Coachella Valley Music and Arts Festival plan to postpone the event, potentially until October, over the spread of COVID-19.

Rage Against the Machine, Travis Scott and Frank Ocean had been scheduled to headline the event.

No word yet on if they will headline the postponed festival.

CNN has reached out to representatives for Coachella for comment.

Organizers for the popular Austin-based annual tech, film and music conference had initially vowed to carry on, but on March 6 Austin Mayor Steve Adler announced that it would be canceled.

"I've gone ahead and declared a local disaster in the city, and, associated with that, have issued an order that effectively cancels South by Southwest this year," he said.

SXSW had been scheduled to run from March 13 to March 22.

The French electronic music festival had been set to run March 14 to March 21 at the Alpe d'Huez Grand Domaine Ski resort in the French Alps.

"The French government is taking drastic measurements regarding the worldwide outbreak of COVID-19 virus (coronavirus) and is therefore enforcing the cancellation of large events in France, bringing together people from different nationalities on closed festival grounds and event locations," a statement on the festival's official site reads. "That is the reason why the French Government has decided to cancel this year's edition of Tomorrowland Winter."

Scheduled to be held at Bayfront Park in Miami, Florida, the event was pushed to next year "Due to the Florida Governor's declaration of a public health emergency and Centers of Disease Control and Prevention's Interim Guidance for COVID-19," according to a statement posted on the festival's site.

"We completely understand how extremely frustrating this is because so many of you are looking forward to coming to Ultra, having already made travel arrangements," the statement continued. "This is, however, an unprecedented issue which is not being taken lightly, and we must continue to defer to the authorities for guidance. Ultimately, there is no higher priority for us than the health, safety and physical well-being of each of you, together with everyone else involved in the production of the event."

Travel restrictions for Asia which might have affected the scheduled K-pop performers and concerns over the virus have indefinitely postponed the 18th annual event which had been scheduled to be held at Los Angeles' Hollywood Bowl on April 25.

The Life Care Center in the Seattle community of Kirkland is a nursing care and rehabilitation facility that has been at the center of the pandemic in Washington state.

With all the concerns, Reedpop - which organizes Emerald City Comic Con - has moved the event from March 12 to March 15 to as of yet unannounced dates this summer.

"Our hearts go out to the entire Seattle community, everyone impacted by the COVID-19 virus, and all of you, the nearly 100,000 amazing human beings who look forward to this event each year," a statement on the event's site read. "Our team was incredibly excited to see you at Emerald City Comic Con next week, however, fans, artists, exhibitors and the rest of the community are what make Reedpop events so special and it is our duty to make sure that your safety comes first."

The Seattle-based band was scheduled to kick off the first leg of their Gigaton 2020 tour March 18 in Toronto, but has announced they are postponing their US and Canadian dates.

"Unfortunately, communing in large groups is a huge part of what we do as a band and the tour we've been busy planning for months is now in jeopardy," Pearl Jam said in a tweet. "We have and will always keep the safety and well-being of our supporters as top priority."

BTS was supposed to kick off their eagerly awaited Map of the Soul Tour in their native Korea on April 11 at Seoul Olympic Stadium.

But that has been scrapped due to the virus.

"While we hope that the situation will improve, we must take into consideration the health and safety of hundreds of thousands of guests as well as our artists and the dire impact a last-minute cancellation may have on guests from overseas, production companies and staff," their reps, Big Hit Entertainment, said in a press release.

The chanteuse blamed travel restrictions for having to postpone her planned show which had been slated for March 10 in Hawaii.

"Aloha Hawaii!! I'm so so sad to have to announce that I'm postponing my show to November," Carey tweeted. "I was so excited to come back to Hawaii on my "anniversary month" but evolving international travel restrictions force us to consider everyone's safety and well being."

The final two shows for Madonna's Madame X tour had been slated to happen on March 10 and March 11 at the Grand Rex in Paris, France.

"Following official notification from the Office of the Police this morning prohibiting all events with an audience attendance of over 1000, Live Nation regrets to announce the final two Madame X performances previously re-scheduled to 10-March and 11-March are forced to be cancelled," it was announced on her official site.

Green Day has canceled Asian stops of their Hella Mega tour, which had been scheduled for March and would have taken them to Bangkok, Hong Kong, Manila, Osaka, Singapore, Seoul, Taipei, and Tokyo.

We have unfortunately made the difficult decision to postpone our upcoming shows in Asia due to the health + travel concerns with coronavirus," the band wrote on their site. "We know it sucks, as we were looking forward to seeing you all, but hold on to your tickets we'll be announcing the new dates very soon."

The One Direction member had been set to promote his new solo album "Walls" with a show in Milan on March 11 that unfortunately won't be happening.

On Twitter he advised planned concert goers to "Hold on to your tickets."

"Don't worry, I'll be back in July and I hope to see to see you all then!," he wrote in a statement he tweeted.

Lavigne posted on her official Instagram account that she would be postponing the Asian portion of her Head Above Water World Tour, which included several cities in China, Japan, the Philippines and Taiwan.

"My band, crew and I have been working so hard to bring this tour worldwide and are completely bummed out," she wrote. "Please everybody take care of yourselves and stay healthy. You're in my thoughts and prayers and we are hoping to announce rescheduled shows soon."

The singer is currently pregnant with her third child (her second with husband, Seattle Seahawks quarterback Russell Wilson) and has had to bow out of a concert in the city of her birth, Fort Hood Texas.

She had been scheduled to perform March 19 at the grand opening of the new Fort Hood USO.

"I am disappointed I won't be able to return this month to the place where I was born, Ft. Hood Texas, and put on the amazing show we had planned however I look forward to being able to bring it to you at a later date in 2020," Ciara said in a statement posted on USO Fort Hood's Facebook page. "I want to thank the USO and the entire community at Ft. Hood for extending your hospitality to myself and my team. I urge everyone to be diligent in taking steps to stay healthy and safe!"

Cyrus was supposed to be the headlining act for the World Tour Bushfire Relief charity concert in Melbourne, Australia on March 13, but said she would be unable to attend because of travel recommendations.

"Australia: Due to the recommendations of local, state, federal and international government authorities, including the Centers for Disease Control, to reduce potential health risks in response to the current global health crisis, we are no longer traveling to Aus for the show," she tweeted.

"I am so disappointed to not be there, but I have to do what is right to protect the health and safety of my band and crew," Cyrus added. "I will still be making a donation to help the victims of the Australian bush fire. I'm sorry to miss everyone in Australia, but I will be back soon."

Instead of being released in theaters in North America on April 10th, the 25th James Bond film's opening in the US has been delayed until November 25.

"MGM, Universal and Bond producers, Michael G. Wilson and Barbara Broccoli, announced today that after careful consideration and thorough evaluation of the global theatrical marketplace, the release of NO TIME TO DIE will be postponed until November 2020," a tweet from the film's official Twitter account read.

"Jeopardy!" and "Wheel of Fortune"

Sources close to the popular game shows tell CNN they will be taping episodes without audiences in attendance indefinitely out of "an abundance of caution due" over the spread of the virus.

"Enter the Fat Dragon" and "Lost in Russia"

Both of these Chinese films reportedly are premiering online rather than in theaters because of the pandemic.

A CBS spokesman recently confirmed to CNN that the network has temporarily halted production of the reality show and that "All contestants and production staff are in the process of returning home."

"At this time, no Racers or anyone on the production team travelling with them have contracted the virus, or shown symptoms, and we are not aware of anyone being exposed to it," the spokesman said in a statement. "Out of an abundance of caution, everyone involved in the show will continue to be monitored when they return home. The health and well-being of the Racers and the production team are our top priorities."

According to The Hollywood Reporter the sequel to the successful 2018 live-action/CGI hybrid film was set to release in the United Kingdom on March 27 and the United States on April 3.

The movie, which features late night host James Corden reprising the starring role, will now be released on August 7 in both of those markets.

Fans of Tom Cruise will have to wait a bit longer for the latest in the "Mission Impossible" franchise.

A three-week shoot set in Venice, Italy, was put on hold in late February.

"Out of an abundance of caution for the safety and well-being of our cast and crew, and efforts of the local Venetian government to halt public gatherings in response to the threat of coronavirus, we are altering the production plan for our three-week shoot in Venice, the scheduled first leg of an extensive production for Mission: Impossible 7," a spokesperson for Paramount, the studio behind the franchise, told The Hollywood Reporter. "During this hiatus we want to be mindful of the concerns of the crew and are allowing them to return home until production starts. We will continue to monitor this situation, and work alongside health and government officials as it evolves."