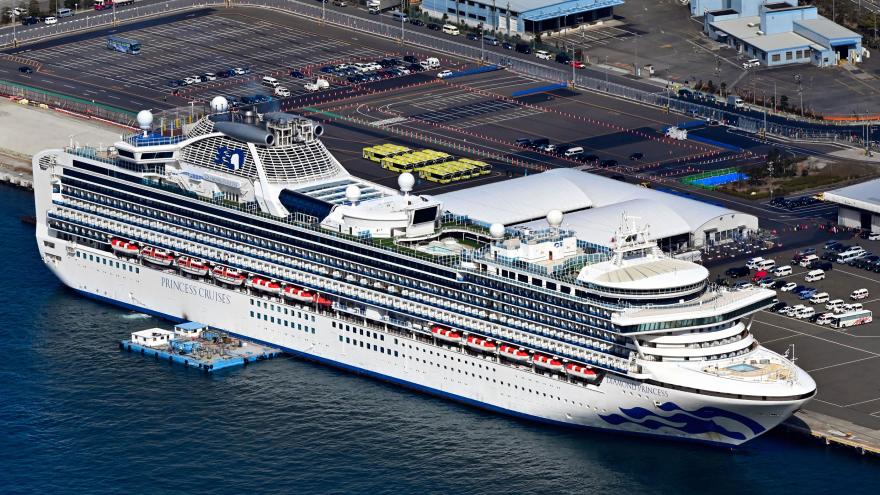 (CNN) -- Some passengers and crew are still aboard the Diamond Princess cruise ship following its 14-day coronavirus quarantine in Japan, but the ship has not seen its last days at sea.

On April 29, following what Carnival Corp. (Princess Cruises' parent company) says will be a full sanitation process, the 116,000-ton vessel will resume service.

The Wall Street Journal first reported on the ship's plans -- shortly after two of the ship's coronavirus patients died.

Passengers on the ship numbered 2,666 and crew 1,045. More than 600 coronavirus cases have been linked to the vessel.

The US Centers for Disease Control and Prevention urged additional travel restrictions and quarantine measures for passengers after assessing the situation aboard Diamond Princess.

"While the quarantine potentially conferred a significant public health benefit in slowing transmission, CDC's assessment is that it may not have been sufficient to prevent transmission among individuals on the ship," the CDC said in a statement on February 18.

Once everyone is off the isolated ship, the ship will undergo a deep cleaning before spending time in a dry dock.

The expectation, Kamali explains, "is that the ship will be fully sanitized by a cleaning company with an expertise in this area following guidance from the US Centers for Disease Control and World Health Organization."

Kamali says details about the cleaning and sanitation process will be shared after they've been approved by the necessary public health authorities.

It's not unusual for a cruise ship struck with an illness outbreak to return to service after a period. And the Diamond Princess should, according to a cruise ship's average life cycle, have nearly 15 more years of sailing under its berth.

The coronavirus outbreak occurred on a voyage that was supposed to have ended two weeks ago. Earlier this month, Princess Cruises canceled sailings aboard Diamond Princess through March 12.

A February 15 posting online extended the cancellations through its April 20 sailing "based on the prolonged quarantine period and the anticipated time to prepare the ship to return to service."

The planned April 29 return is timed to the start of Japan's annual Golden Week celebrations.

Colleen McDaniel, editor in chief of Cruise Critic, calls this a unique situation, adding that "it's hard to think of another, historically, that's comparable."

However, McDaniel says, "it is normal protocol for a ship to undergo a very thorough sanitation after any reported illness on board. Generally, that cleaning doesn't take longer than a day, so this is certainly more extensive than usual. Cruise lines always put passenger safety first, so you can be certain the decision on when Diamond Princess could return to service wasn't made lightly."

McDaniel, who is boarding a cruise ship Friday headed to the Bahamas, acknowledges the decision to travel right now is a personal one.

Angel Wilson, a travel adviser at Dream Journeys in Indianapolis, was supposed to depart on Diamond Princess on March 24 for a spring break trip in Japan, but Princess canceled that voyage, offering customers a full refund of the cruise fare, along with a 25% future cruise credit.

Wilson still plans to make the trip to Japan with her mother and daughter, but says it will be a less budget-friendly, land-based journey instead.

Wilson is optimistic about Diamond Princess' future: "I have faith that Princess will get the ship fully prepared before they allow any passengers back on board. I know they already have a very thorough plan to move the ship to a facility and have it cleaned/sanitized by the strictest hospital standards."

She adds, "I do wonder if they'll wind up deciding on the route several other cruise lines have taken, which is simply to cancel the 2020 Asia season and relocate the ship, once she's ready for service again."

Industry group Cruise Lines International Association (CLIA) has released enhanced protocols for its member cruise lines in response to the coronavirus outbreak. Individual cruise lines also have stepped up passenger screening and restrictions to prevent introduction of the virus aboard ships.

The situation in Asia has already prompted the cancellation of many sailings in the region and raised questions over whether vacationers heading on cruises elsewhere are at heightened risk of contracting the virus.

"I think there's extremely low risk of getting novel coronavirus on a cruise ship," said Dr. John Lynch, who has specialties in infectious disease and travel medicine at University of Washington School of Medicine.

The vast majority of cases are centered around China's Hubei province, where there's a massive containment effort to stem the virus' spread, said Lynch.

Cruise lines are also paying close attention to where passengers are coming from and taking the threat very seriously, he said.