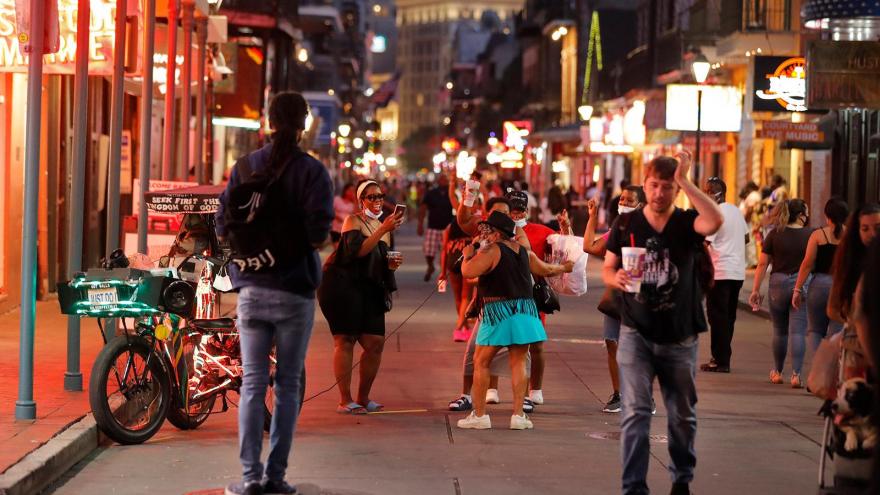 People sing and dance to karaoke on Bourbon Street in New Orleans, Thursday, July 9, 2020. Now, after a light easing of some of the restrictions (bars, for example, can operate at 25% capacity, church services can be held with capacity limits and social distancing) cases are growing and hospitalizations are up, surpassing 120 this past week. There are fears that the virus, linked to more than 1,000 deaths in the metro area since March, may prompt another shutdown. (AP Photo/Gerald Herbert)

(CNN) -- Prompted by a dramatic surge in cases across the nation and within their borders, three states on Monday reinstated restrictions that were put in place early in the coronavirus pandemic.

At least 27 states have put a hold on reopening businesses or reimposed measures aimed at slowing the spread of the virus.

Citing rising numbers, the governors of California and New Mexico -- having already taken some steps -- reimposed restrictions on dining. In Oregon, where the number of cases has recently risen, the governor expanded rules on face coverings to include outdoor gatherings where social distance cannot be maintained.

In California, Gov. Gavin Newsom cited increases in the rate of positive cases and instances of community transmission when he ordered all counties to close many indoor activities.

]"We're seeing an increase in the spread of the virus," the governor said. "That's why it's incumbent upon all us to recognize soberly that Covid-19 is not going away any time soon."

Thirty of the 58 counties that are on the state's monitoring list will need to close fitness centers, places of worship, offices for non-critical sectors, personal care services, hair salons and barbershops, and indoor malls under the new order.

The California Department of Public Health reported 8,358 new cases and 23 new deaths on Monday. There have been 329,162 cases and 7,040 deaths in the state.

Hospitalizations for Covid-19 have increased by 28% over a two-week period, according to the governor.

California is one of almost three dozen states in which cases are rising, and it's not the only one rolling back measures meant to combat coronavirus.

New Mexico Gov. Michelle Lujan Grisham put new restrictions on indoor seating at restaurants and breweries, a statement from her office said. Indoor dining at restaurants had been allowed with limits since June 1 but that is now prohibited. Breweries were permitted to have customers inside as of June 15.

The facilities are allowed to seat people outside at 50% of their capacity.

In the past two weeks, the state has seen 3,049 new positive cases of Covid-19, representing 20.2% of the total positive cases statewide over the course of the pandemic, according to the governor's office.

Oregon Gov. Kate Brown announced indoor gatherings such as birthday or dinner parties will be limited to 10 or fewer people. Faith-based events, gyms and restaurants are on the exempt list under the governor's order.

"Today I am sounding the alarm: we are at risk of COVID-19 getting out of control in Oregon," she tweeted. "Each of us needs to take immediate action to slow the spread of this disease."

Wyoming Gov. Mark Gordon announced Monday that he was extending restrictions in his state through July 31.

New Jersey -- one of the few states that has seen a drop in cases -- is lifting the requirement that transit and private buses, trains and light-rail cars can only operate at 50% capacity.

People who have been infected with the novel coronavirus could see their immunity decline within months, and that's just "what we were afraid of," Dr. William Haseltine told CNN's Erin Burnett.

Citing three studies done in other countries, Haseltine said this coronavirus is like similar coronaviruses that give us colds. They are different from other viruses.

"Those things, like measles and mumps, you get them once, you're protected for life," he said.

But Haseltine said it's a different story with the cold viruses; your body "forgets" it was ever infected, according to three studies.

Haseltine says the findings, if they prove true, have implications for infected individuals, for the idea of achieving herd immunity against the virus and for the development of a vaccine.

"Individually, that means if you had it, you have to be just as careful as if you didn't have it, because you might get it again, and it might cause exactly the same disease as it caused the first time, or worse," he told CNN.

"Herd immunity depends on long-lasting immunity and if it doesn't exist, you can't get herd immunity," he said. "This (coronavirus) looks just like its brothers and sisters except it's a lot nastier. But it doesn't look like it's different in the sense that it makes your immune system react any more strongly," he said.

Haseltine, a former professor at Harvard Medical School and Harvard School of Public Health, is now chair and president of ACCESS Health International.

Florida has more than 27,000 new cases in two days

Florida health officials reported Sunday a staggering record of new cases in a single day:15,300. If Florida were a country, it would be the fourth highest in the world in reporting new cases. The state would rank 10th in the list of nations with the most cases, according to data from Johns Hopkins University data.

The state added at least 12,343 cases since Sunday, according to the Florida Department of Health.

At least 35 states are seeing a rise in new cases compared to the previous week, according to Johns Hopkins University data.

The US has recorded more than 3.3 million coronavirus cases since the pandemic began, meaning nearly 1 out of every 100 Americans has tested positive for Covid-19, according to Johns Hopkins University. At least 135,582 Americans have died.

Across the world, 13 million people have tested positive for the virus.

Local and state leaders in the US have said in recent weeks new cases are largely driven by Americans who have opted to resume gatherings and outings to bars. In many states, the average age of new cases has shifted downward, with more young people testing positive than ever before since the start of the pandemic.

The rising US numbers could just be the tip of the iceberg, as experts have often highlighted infections could be around 10 times higher than what is reported, as many go untraced.

To blunt the rise in cases, many states now have some type of mask requirement order in place.

But precautions have been met with heavy backlash from many officials and residents and some governors have stayed away from statewide mask orders, including Florida.