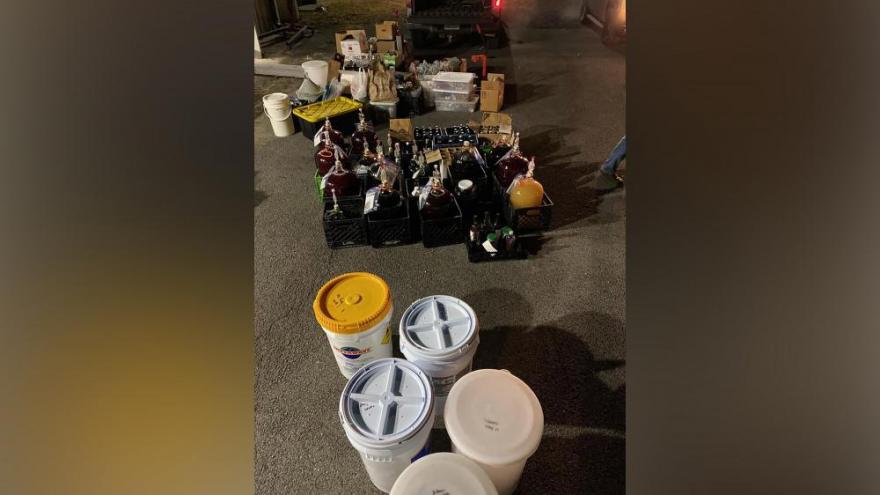 Police say they've seized a large amount of wine and equipment at the Rainsville Waste Water Treatment Plant, a building owned and operated by the City of Rainsville.

It happened in the town of Rainsville, home to around 5,000 people and about 100 miles northeast of Birmingham.

After receiving an anonymous tip Thursday about a possible illegal wine production operation being run inside a municipal building, law enforcement arrived at the Rainsville Waste Water Treatment Plant to find a large amount of illegal alcohol and other equipment used to make wine at home, the DeKalb County Sheriff's Office said.

"This is definitely one of the biggest operations we've seen in our county and possibly our state," Sheriff Nick Welden said in a statement.

At-home wine production is legal in Alabama as long as the quantity produced is kept under five gallons per year per family, according to the National Conference of State Legislatures. Photos included in a sheriff's office news release show multiple cases of wine that appear to be larger than five gallons each.

Rainsville Mayor Roger Lingerfelt later arrived at the scene "to allow agents and investigators to proceed in a search of the building."

"I want to thank the mayor for his cooperation and willingness to allow law enforcement to do our job and shut something like this down," Welden said. "A big thanks to the public and their tips against ALL illegal activities."

"Once again, it doesn't matter who you are, no one is above the law," Welden said. "We won't tolerate anyone using their position to hide their illegal actions at the taxpayer's expense."

Sheriff's officials said the investigation is ongoing and they expect to file charges.