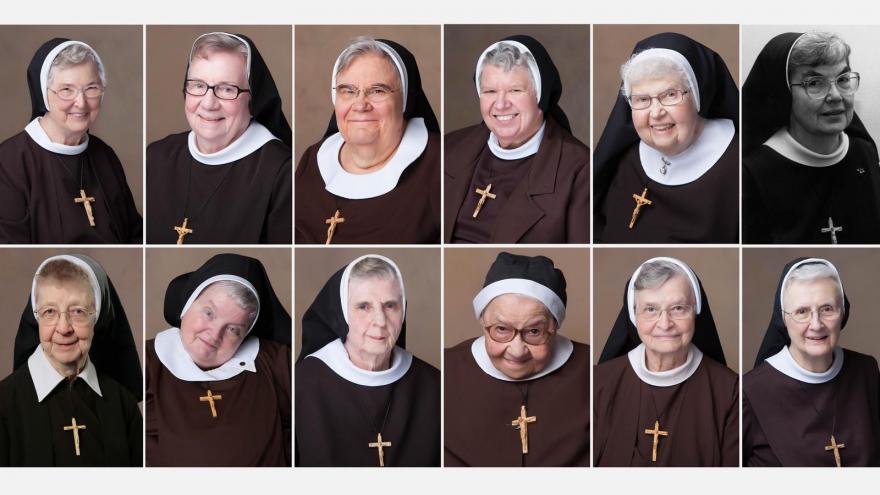 The 12 Felician Sisters that died of Covid-19 in one month at a convent in Livonia, Michigan.

(CNN) -- Coronavirus spread so quickly through a convent in Michigan that it claimed the lives of 12 nuns in one month, beginning on Good Friday.

They were all members of the Felician Sisters convent in Livonia, outside of Detroit, ranging in ages from 69 to 99, the executive director for mission advancement, Suzanne English, confirmed to CNN on Tuesday. A 13th sister initially survived the virus but passed away from its effects in June.

The women were long-time members of the convent and leave behind a legacy of service, according to their obituaries supplied by English. They all served others through different roles, from teaching to helping at-risk children to playing music to publishing a 586-page book about the history of the convent.

One sister won a commercial script-writing contest for Campbell's Soup with her second-grade class. Another was assigned to the Felician Generalate in Rome twice and worked as secretary in the English section of the Vatican Secretariat of State.

"We grieve for each of our sisters who has passed during the time of the pandemic throughout the province, and we greatly appreciate all of those who are holding us in prayer and supporting us in a number of ways," said Sister Mary Christopher Moore, provincial minister of Our Lady of Hope Province.

The women all lived and worked on the 360-acre campus that was once home to 800 sisters, according to the Global Sisters Report, an independent, non-profit Catholic news publisher. Now, only around 50 reside there, according to English.

English said the Livonia convent is one of 60 convents in the US and Canada, plus a mission in Haiti, where the 469 Felician Sisters of North America reside.

The Global Sisters Report said the death of the 13 nuns in Livonia may be the worst loss of life to a community of religious women in the US since the 1918 influenza pandemic.

At the beginning of the pandemic in March, the convent, like other long-term housing residences, implemented a no-visitors rule and placed restrictions on group activities to help curb the spread of the virus, according to Global Sisters Report.

'It kind of shattered our faith life a little bit'

But the virus spread through the convent and on Good Friday, April 10, came the first death: Sister Mary Luiza Wawrzyniak, 99.

Her death was followed by Sister Celine Marie Lesinski, 92, and Sister Mary Estelle Printz, 95, who both died on Easter Sunday, April 12.

The convent grappled with how they were able to care for each other and only 10 people could attend each funeral, according to Global Sisters Report.

At the end of June, the convent lost Sister Mary Danatha (Lottie) Suchyta, 98, to Covid. In total, at least 30 sisters in Livonia were infected with the virus and 17 recovered, English said, citing Sister Noel Marie Gabriel, director of clinical health services for Our Lady of Hope Province.

"Some of our sisters who have had COVID-19 are struggling to recover from a variety of effects, including continuing weakness, respiratory issues and more," a statement released by Felician Sisters in early July read.

In the United States, nearly 142,000 have died from the coronavirus, according to Johns Hopkins University's tally of cases on Tuesday. More than 3.89 million people have been infected with the virus in the US.

The Livonia convent is not the only religious order that has seen the devastating effects of the virus. Sister Mary Ramona (Florence) Borkowski, 93, died of Covid on April 18 at a convent located in Lodi, New Jersey. In 1971, Borkowski founded and became the director of the Felician School for Exceptional Children in Lodi, a position she held until 2018, according to her obituary.

Between April and May, six sisters of different religious orders that lived at Our Lady of the Angels Convent in Greenfield, Wisconsin, died from Covid-19.