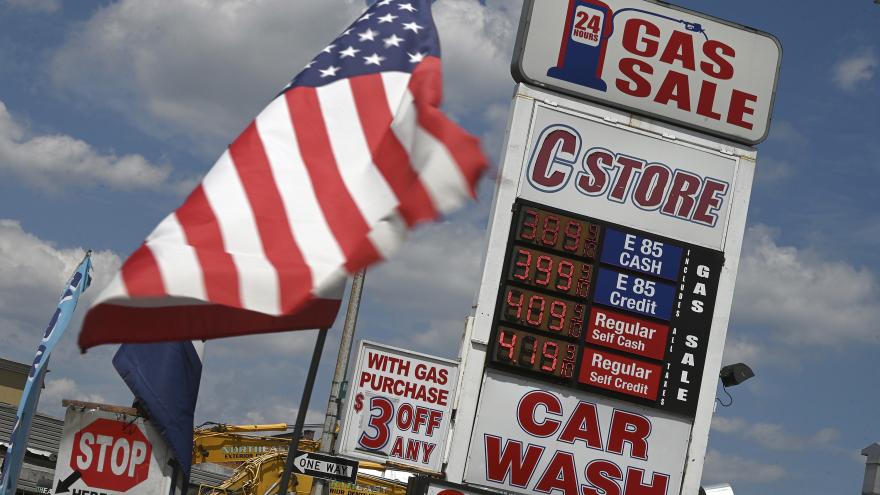 (CNN) -- Consumer sentiment in August continued to rebound from its June trough, but Americans' feelings about the economy remain profoundly depressed from a year earlier, weighed down by uncertainty about inflation and the job market.

The nation's collective outlook rose marginally this month, according to the latest University of Michigan Surveys of Consumers released Friday. The benchmark sentiment index rose to 55.1, up from51.5 in July, after plummeting to a record low of 50 in June, when consumers were feeling buffeted by soaring inflation and $5-a-gallon gas.

Gas prices have retreated and a robust labor market added more than half a million jobs last month, but survey respondents' outlookregarding current economic conditions nonetheless slumped to 55.5 from 58.1 in July.

Experts in personal finance and consumer behavior say this is unsurprising, given that much of our attitudes about money are subjective and shaped by emotions.

"We're asking people how they feel and asking them to predict the future, [and] we're terrible at predicting the future when we feel bad," said Brent Weiss, co-founder of Facet Wealth, a financial planning firm. "Consumer sentiment is a reflection of our current situation and not a predictor of the economy or the market's ultimate direction," he said.

Even though gas prices have retreated significantly over the past couple of months, behavioral economists say much of the nation's collective angst can be chalked up to prices at the pump. Although gasoline comprises a small percentage of average household spending, those dollars nonetheless command an outsized role in how people feel about the economy, said Richard Lehman, adjunct professor of behavioral finance at UC Berkeley Extension at the University of California, Berkeley.

"People tend to hang on one or two things that are dramatic to them and that they face everyday," he said. "Things that are in your face like gas prices tend to overweight themselves."

The University of Michigan also found that near-term inflation expectations remain pessimistic. "The share of consumers blaming inflation for eroding their living standards remained near 48%," Joanne Hsu, director of the Surveys of Consumers, said in a release accompanying the data.

Survey respondents expect inflation tobe around5% over the next 12 months, up from the 4.6% expectation a year earlier. But even a 5% inflation rate would imply considerable improvement over current year-over-year inflation, which continues to run at a hot 8.5%.

The survey was conducted before the release of two critical inflation reports this week, both of which offered hope that runaway price increases might be slowing. The survey respondentsanticipatedan inflation rate of 3% in five years, a figure that -- while still higher than the Federal Reserve'sdesired baseline of 2% -- is exactly at the mid-range of consumer expectations over the past year.

Economists are divided on the question of if, or to what extent, Americans' often unarticulated feelings about their finances or the economy impact consumer spending.

"It's a conundrum, because the question is: what drives what?," said Michael Finke, professor of wealth management at The American College of Financial Services. "Many of these effects happen at the same time."

This can make it challenging to tease out whether companies lay off workers who then curtail their spending, or if it starts with people shopping less in anticipation of being laid off, which can trigger the same domino effect of falling demand, prompting companies to cut headcount.

Although household balance sheets remain in a position of relative strength, there is a fear factor at work, said Tamara Charm, partner and leader of the insights function at consulting firm McKinsey. "A lot of the pullback right now is consumers being worried rather than consumers not having the dollars to spend."

This means that -- while we might not feel good about it -- we can and will continue to spend on things we need, although we might delay buying items like jewelry or electronics, particularly if we have to put them on a credit card, given the rising cost of borrowing money.

"I would expect that retail sales will continue their slower pace of growth and that essentials will grow more than discretionary goods," Charm said. "Psychologically, consumers are giving greater scrutiny to their discretionary goods."