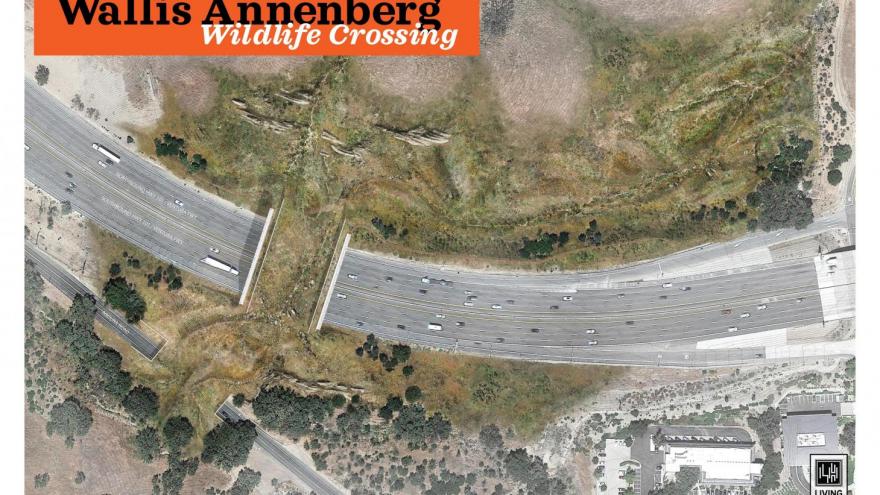 A rendering shows how the bridge will let animals cross over traffic.

(CNN) -- Wild animals in Southern California soon will have more turf to roam thanks to the world's biggest wildlife crossing, which will span 10 lanes of Highway 101 in northwest Los Angeles to close a crucial gap for habitats.

Mountain lions, which typically wander a territory spanning 150 to 200 miles, will be among the chief beneficiaries of the new overpass, providing a safe passage from the Santa Monica Mountains, across the freeway, and into the Simi Hills of the Santa Susana mountain range. This week, an 18-month-old mountain lion recently separated from its mother and seeking its own terrain was hit and killed on the 405 freeway, Ana Cholo, spokesperson for the National Park Service (NPS) tells CNN.

The $87 million Wallis Annenberg Wildlife Crossing is named for the president and CEO of the Annenberg Foundation, a family foundation that supports non-profits. More than 5,000 individual contributions were made, said Steven Keck, acting director of CalTrans, the California Department of Transportation, noting the crossing also will help protect motorists.

"We can protect California's ecosystems without jeopardizing the transportation and other infrastructure development that we need for a growing population," said US Sen. Alex Padilla at the project's groundbreaking ceremony Friday.

California Gov. Gavin Newsom, who was also there, promised $50 million for other similar projects throughout the state, though they will not be of the same size and scope. The Annenberg Wildlife Crossing is a partnership of the National Wildlife Federation and the Santa Monica Mountains Conservancy, and will be built by CalTrans.

"This project is truly incredible," said Wade Crowfoot, California secretary for natural resources. "We will look back decades from now and realize that this project galvanized a new era of conserving and reconnecting nature."

Because pumas demand such a large territory, being relegated to an "urban island" surrounded by busy freeways has led to inbreeding and lack of genetic diversity, according to the NPS, which has been studying cougars in the Los Angeles area for two decades.

"You're hemmed in to the point where all you can do is date your cousins," Brad Sherman said of the mountain lions, which thrive when they have a large territory to hunt and mate. We're "putting the mountain lions back on Tinder."

"I'm shocked to hear of a lack of food or sex in Hollywood, but for mountain lions, it's true," quipped Rep. Adam Schiff, whose district includes the glitzy region.

P-22, one of the mountain lions being tracked by the NPS, has gained fame in the area for roaming through the Hollywood Hills, a bad bout of mange after being exposed to rat poison, and even mauling a koala at the L.A. Zoo in Griffith Park. With its own social media accounts, an annual P-22 Day, and branded merchandise, this cat has garnered something of a cult following.

California's cougars are getting the lion's share of attention for this crossing, as their enclosure threatens their very existence, the NPS said. But it also will provide habitat access to coyotes, bobcats, deer, snakes, lizards, toads and even ants.

"We can coexist side by side with all kinds of wild instead of paving it over and choking it off," said philanthropist Wallis Annenberg at the groundbreaking ceremony. "It is about bringing more attention to an ingenious solution so urban wildlife and ecosystems like this one cannot only survive, but thrive."

The crossing will blend with the surroundings and be covered in soil and native plants. The Santa Monica Mountains Foundation created a special plant nursery that will grow all of the fauna to be used in covering the crossing when it nears completion in 2025.

Correction: An earlier version of this story misattributed a quote regarding the number of contributions made. It was said by Steven Keck, acting director of CalTrans, the California Department of Transportation.