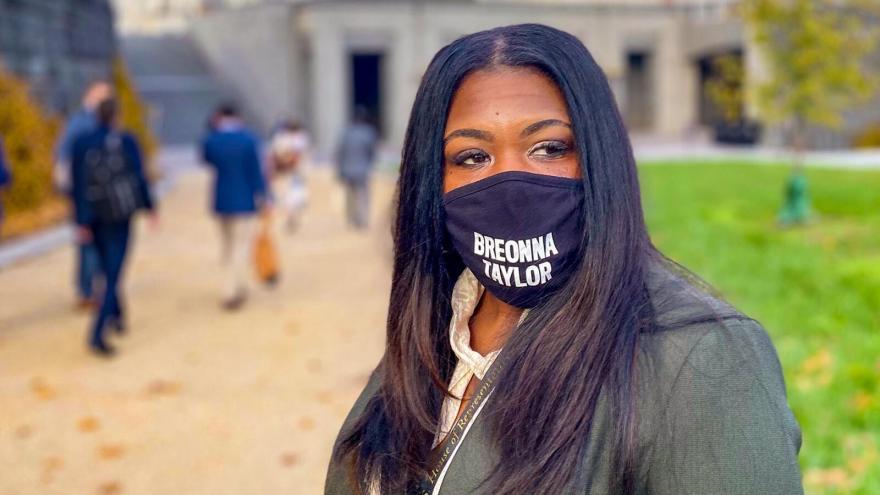 Congresswoman-elect Cori Bush said Monday she was stunned and "hurt" when some Republicans addressed her as "Breonna" during new member orientation at the Capitol because she was wearing a mask with Breonna Taylor's name on it.

(CNN) -- Congresswoman-elect Cori Bush said Monday evening she was stunned and "hurt" when some Republicans addressed her as "Breonna" during new member orientation at the Capitol because she was wearing a mask with Breonna Taylor's name on it.

"It did not seem like they were being malicious. They just did not know," Bush told CNN's Erin Burnett on "OutFront."

"But then after the next, and next, and the next, then I really started to feel hurt, because I'm like this has been a national movement ... the reports are between 15 and 26 million people protested up to July -- from June to July. How do you not know? And we claim ourselves -- we asked, we signed up -- to be leaders," she continued.

A nurse and pastor turned progressive community leader, Bush will be Missouri's first Black woman to represent the state in Congress after winning her House seat, according to CNN's projection.

Taylor, a 26-year-old Kentucky EMT, was shot at least eight times by police after law enforcement officials broke down the door of her apartment in an attempted drug raid in March. Her death prompted the kind of soul searching about the role of police in society and systemic racism in the criminal justice system that many advocates have been urging for decades.

Before new member orientation, Bush had tweeted a photo of herself wearing the mask with Taylor's name on it outside the Capitol with the caption: "Change does not come from this place unless we bring it here ourselves."

"We're bringing change to the 117th Congress," she said.

Bush expanded on that message Monday, telling Burnett that she explained to each GOP lawmaker that addressed her as "Breonna" who Taylor actually was.

"It gave me an opportunity to teach, and so now they know who Breonna Taylor is," Bush said. "Hopefully they went to go research her and we can further this conversation."

"This is definitely a night to remember," she said in an election night address.

"As the first Black woman and also the first nurse and single mother to have the honor to represent Missouri in the United States Congress, let me say this: To the Black women, the Black girls, the nurses, the essential workers, the single mothers, this is our moment."