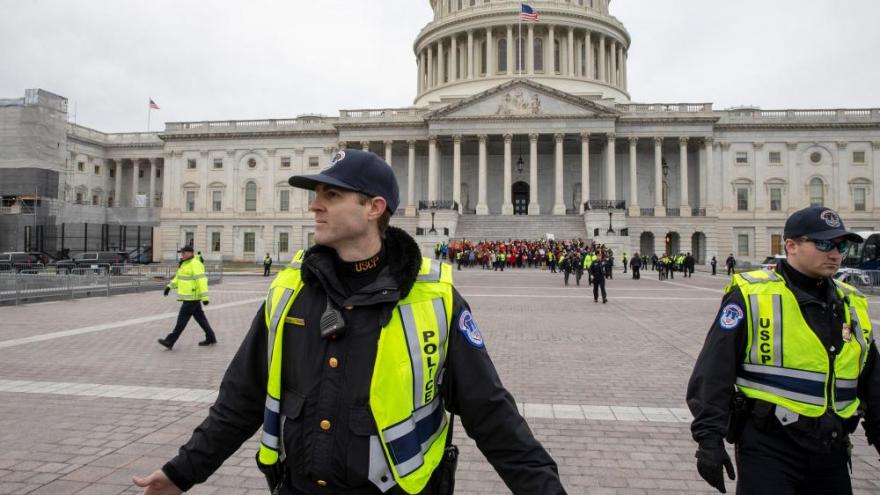 Five months after the January 6 insurrection, the House and Senate have come to an agreement that will award the Congressional Gold Medal to the officers who defended the Capitol.

(CNN) -- Despite the House and Senate coming to an agreement that will award the Congressional Gold Medal to the officers who defended the Capitol, 21 House Republicans voted against the legislation Tuesday, the latest reminder that members of Congress still cannot agree on the facts of the deadly January 6 riot.

The final vote in the House on Tuesday was 406-21. The number of House Republicans voting against the bill nearly doubled since the first time a version of the bill came to the House floor, as the vote when the bill first passed the House in March was 413-12. Republican Rep. Lance Gooden of Texas was the only GOP member to vote no in March and change his vote to yes this time around.

Both the House and the Senate had passed their own resolutions to bestow the medals, but the initial pieces of legislation varied. The revised bills will now award three medals -- one to the entire US Capitol Police force, and one to the Metropolitan Police Department, "so that the sacrifices of fallen officers and their families, and the contributions of other law enforcement agencies who answered the call of duty on January 6, 2021, can be recognized and honored in a timely manner."

A third will be put on display at the Smithsonian Institution, with a plaque that lists all the law enforcement agencies that protected and defended the Capitol.

Republican Rep. Marjorie Taylor Greene of Georgia told reporters that she voted against the Congressional Gold Medal to US Capitol Police Officers and MPD because she does not believe the legislation should refer to January 6 as an insurrection.

"I wouldn't call it an insurrection," Greene told reporters.

Greene also said she had issue with the language of the bill that referred to the Capitol complex as "the temple of our American Democracy."

"This is not a temple. That is for sure," Greene said.

Republican Rep. Thomas Massie of Kentucky also said his vote against the legislation was because of the language of the bill, specifically the references to the Capitol as a temple and January 6 as an insurrection.

"There are pending cases or trials right now, indictments against people, and I think if we called it an insurrection, it could have a bearing on their case," he said. "If they just wanted to give the police recognition, they could have done it without trying to make it partisan," he said.

Pressed again, he said, "They were protesting and I don't approve of the way they protested, but it wasn't an insurrection. My goodness. Can you imagine what a real insurrection would look like?"

Other members such as Rep. Andrew Clyde and Rep. Andy Biggs ignored questions from CNN asking to explain their vote.

Rep. Warren Davidson, an Ohio Republican, explained in a tweet that the reason he voted against the bill but previously voted for an earlier version of the legislation was because the final version of the bill referenced fallen Capitol Police Officer William "Billy" Evans who was killed as the result of an attack on the Capitol on April 2.

"I have already voted to award the Congressional Gold Medal to DC Metro and Capitol Police for their bravery on 1/6. Today's vote was an attempt to rewrite history and further a Democrat narrative" Davidson added.

Republican Rep. Adam Kinzinger, who has been an outspoken critic of former President Donald Trump and his supporters that remain in the House, publicly criticized his 21 colleagues who voted against the legislation.

"How you can vote no to this is beyond me," Kinzinger tweeted after the vote. "Then again, denying an insurrection is as well. To the brave Capitol (and DC metro PD) thank you. To the 21: they will continue to defend your right to vote no anyway."

Republican Rep. Liz Cheney of Wyoming, a frequent Trump critic herself, specifically criticized Rep. Paul Gosar, who, in addition to voting no on the legislation, had referred to the shooting of Capitol rioter Ashli Babbitt as an execution earlier Tuesday.

"On January 6, as the violent mob advanced on the House chamber, I was standing near @RepGosar and helped him open his gas mask. The Capitol Police led us to safety. It is disgusting and despicable to see Gosar lie about that day and smear the men and women who defended us," tweeted Cheney, who was ousted from GOP leadership last month after she repeatedly rejected Trump's election lies.

In February, the Senate unanimously voted to award a Congressional Gold Medal to Officer Eugene Goodman, who singlehandedly led a mob of insurrectionists away from the Senate chamber minutes before the chamber doors were sealed with senators still inside. But the House version of the legislation opted to award the medal to the whole of the police force rather than singling out one individual for the medal.

The legislation does name several individual officers, including Goodman, for their valor, saying "Capitol Police Officers Brian Sicknick and Howard Liebengood, Metropolitan Police Department Officer Jeffrey Smith, and those who sustained injuries, and the courage of Capitol Police Officer Eugene Goodman, exemplify the patriotism and the commitment of Capitol Police officers, and those of other law enforcement agencies, to risk their lives in service of our country."

The 21 Republicans who voted against the bill are: