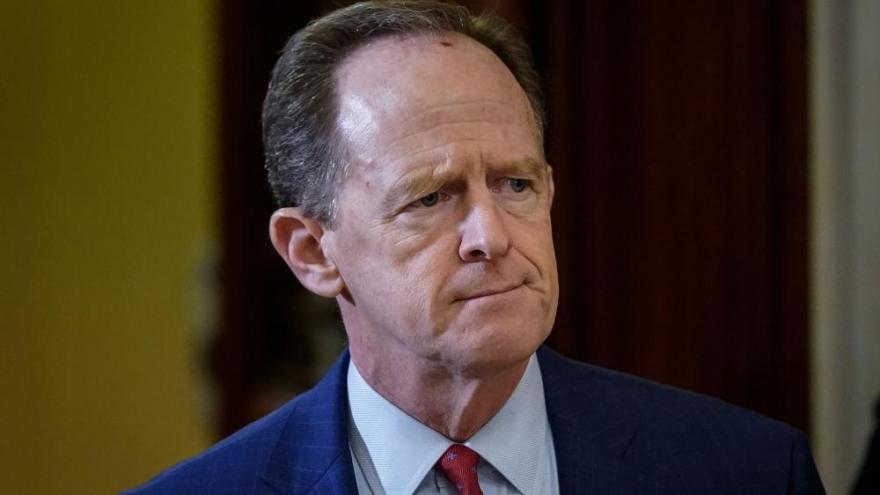 Sen. Pat Toomey (R-PA) and Senate Minority Leader Chuck Schumer reached over the role of the Federal Reserve to intervene in the US economy.

(CNN) -- A deal on a long-awaited rescue package to deliver much-needed aid to struggling Americans suddenly was within reach after a major breakthrough Saturday night over a key sticking point: the role of the Federal Reserve to intervene in the US economy.

After days of tense negotiations over a provision pushed by Sen. Pat Toomey to pare back the role of the central bank's emergency lending authority, Senate Minority Leader Chuck Schumer and the Pennsylvania Republican reached a deal in principle over the provision, aides said. Now, the two sides will draft the legislative language to ensure it reflects the outlines of the deal.

"We're getting very close, very close," Schumer said as he left the Capitol, predicting the House and Senate would vote to approve the package Sunday -- just hours before the government runs out of money at midnight.

The exact details of the agreement still need to be seen. And there are hurdles awaiting congressional leaders as they push for quick passage of the $900 billion relief deal, which is expected to include $300 per week in jobless benefits, direct payments of $600 for individuals, $330 billion for small business loans, more than $80 billion for schools, and billions for vaccine distribution.

Lawmakers have yet to see any details of the relief plan -- nor have they seen bill text of the massive $1.4 trillion spending package that must pass Congress to keep the government open past Sunday. Any senator can delay a vote for days if they are dissatisfied with the process or policy. Plus it's uncertain how President Donald Trump will respond, given he's been disengaged from the talks and consumed with his election loss.

Still, the late agreement over the disputed provision likely clears the way for a hectic Sunday where the leaders of the four caucuses will brief their members, attempt to schedule quick votes and jam the bill through Congress in a matter of hours — a process almost unheard of for a bill of this size and scope.

With Americans eager for relief, impatience is growing in the ranks as both sides recognize a deal must be reached Sunday or the talks could collapse completely.

Sen. Chris Coons, a Delaware Democrat, said that a deal will either be reached Sunday on a compromise, or one side needs to make a "hard decision" about how to proceed.

"This cannot go on," Coons said.

Republicans argue that the Fed's emergency lending program, created under the March CARES Act, needs to be wound down as envisioned by that law, saying leaving it open would amount to a slush fund for the incoming Biden administration.

But Democrats argue that the authority is essential to continue to prop up the economy and say that the provision to wind it down -- pushed chiefly by Toomey -- would tie the hands of President-elect Joe Biden's team.

"After going back and forth all day with Leader Schumer, Sen. Toomey has agreed to drop the broad language in his proposal that would have prevented the Fed Chair from establishing similar facilities in the future to the ones created in March," a senior Democratic aide said. "Compromise language is being finalized and, now that this obstacle has been cleared, a final agreement on an emergency relief package is significantly closer."

"This agreement rescinds more than $429 billion in unused CARES Act funds; definitively ends the CARES Act lending facilities by December 31, 2020; stops these facilities from being restarted; and forbids them from being duplicated without congressional approval," Toomey spokesman Steve Kelly said in a statement. "This agreement will preserve Fed independence and prevent Democrats from hijacking these programs for political and social policy purposes."

"Now that Democrats have agreed to a version of Senator Toomey's important language, we can begin closing out the rest of the package to deliver much-needed relief to families, workers, and businesses," said Doug Andres, a spokesman for McConnell.

A long day of talks

Schumer had engaged in talks with Toomey throughout Saturday, and other Democrats were also taking part in the talks.

Sen. Kyrsten Sinema, an Arizona Democrat, met privately with Toomey and the two had discussed how to pare back Toomey's proposal. The discussions led to further exchanges with McConnell and other top Republicans to see if they can get a deal.

Leaving the Senate floor on Saturday, Sen. Bill Cassidy, a Louisiana Republican, said he thinks they will be able to get a deal.

"I think they're going to resolve it," Cassidy said, with a "more narrow focus."

Schumer indicated on a call with Senate Democrats that if a deal is reached, a vote could happen in the Senate on Sunday night or Monday -- but that would take consent of all 100 senators to allow that vote to happen.

Senate Majority Whip John Thune warned on Saturday that the effort to finalize a deal could spill over into Monday.

"I'm still somewhat hopeful we could wrap this up if the House moves quickly and we got it, take it up, and do it tomorrow night, but I would say it's also very possible that it rolls into Monday," he said.

Throughout the day, however, the two sides had appeared to be dug in over the issue.

Treasury Secretary Steven Mnuchin had told GOP senators on a conference call that they still had not resolved the fight over whether to pare back the emergency lending programs of the Federal Reserve, according to a source on the call.

"We had this big issue, a last, kind of, minute thing with Mr. Toomey. And that has to be resolved. And then everything will fall into place. But that's the big thing," Speaker Nancy Pelosi said.

The proposal, Schumer said, "is not about Covid or helping the American people. It's about tying the hands of the next Treasury secretary and the next Fed chairman in a true emergency."

But both sides recognized a deal had to be reached.

McConnell warned, "There's a kind of gravitational pull here in Congress, where unless we're careful any major negotiation can easily slide into an unending catalogue of disagreements."

On a conference call with GOP senators, the Kentucky Republican noted that a dozen GOP senators had left town even though there were a number of votes lined up Saturday on approving nominations, according to two sources familiar. McConnell thanked the members who stayed in town.

The absent senators would need to return if there's a vote Sunday on a relief package, but if there's an attendance problem, a vote could potentially be delayed until Monday.

The clock is ticking

Hill leaders are facing growing pressure to lock down a deal as lawmakers remain in Washington this weekend and are now up against another rapidly-approaching deadline after a government shutdown was narrowly averted on Friday evening when the House and Senate approved a two-day extension of government funding.

Leadership is planning to pass a stimulus deal alongside a $1.4 trillion government funding package for a new fiscal year, tying the two issues together.

There are a series of other outstanding policy disputes that have created last-minute holdups that lawmakers believe can be bridged. One of them is on education funding.

Currently in the emerging deal, there's more than $80 billion for schools and education providers. Republicans are pushing for $5 billion of that to go to private schools. Democrats are trying to cut that to $2.5 billion.

With the clock ticking, rank-and-file members have become increasingly frustrated with the process, after leaders have signaled for days in a row that a deal is imminent, and with how little information has been released publicly about the details of such a significant bill that they expect to vote on soon.

House Majority Leader Steny Hoyer announced on Friday that the next votes in the House would not occur before 1 p.m. E.T. on Sunday, meaning that lawmakers will be once again backed up against a government funding deadline.