Congress made PPP more flexible, but businesses say it's not enough 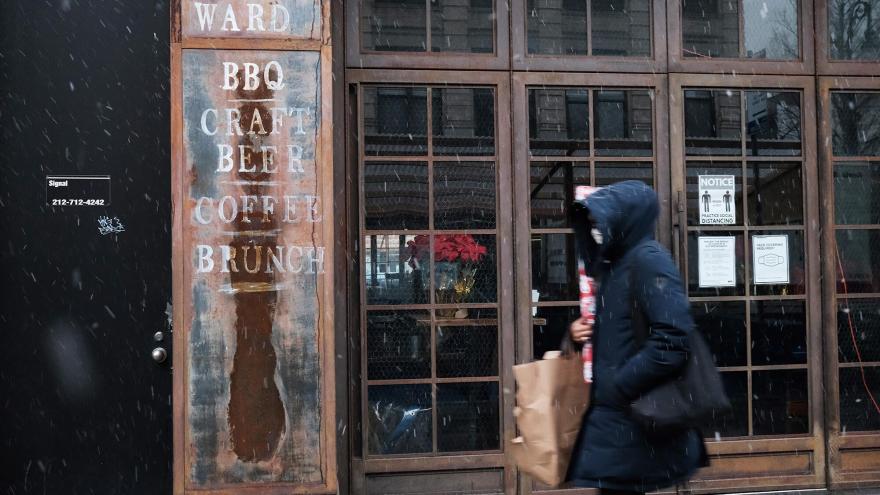 Congress made PPP more flexible, but businesses say it's not enough. Pictured here, people walk by a closed restaurant in Brooklyn on December 9, 2020, in New York City.

(CNN) -- Congress has made the Paycheck Protection Program more flexible and given priority to the smallest, hardest-hit businesses, but the long-awaited second round of loans will still serve as little more than a stopgap as the pandemic rages on.

Retail businesses like Georgie Lou's Retro Candy store in Carlisle, Pennsylvania, will likely receive the same amount of money they did in the spring -- which lasted Georgie Lou's only a few months, leaving owner Stephanie Patterson Gilbert to piece things together on her own ever since.

"It's helpful, but none of this is going to save a business at the end of the day," said Gilbert.

Her revenue is down 75% compared with 2019, likely making 2020 her worst year since she first opened more than a decade ago. She's kept her business closed to walk-in customers throughout the pandemic and is taking orders online only.

"The only thing that's going to save small businesses is getting past Covid," Gilbert added.

What happened to the first round

The first round of forgivable loans were disbursed between April and August. Lawmakers designed the Paycheck Protection Program to help small business owners stay afloat while some states and cities imposed shutdown restrictions to help stop the spread of the coronavirus.

The program closed to new applications in August, even as coronavirus cases began to resurge. It had been extended after the initial rush for funding turned into an effort to find takers, in part because of the rules surrounding loan forgiveness.

It was clear by that time that the economy was not going to get back to normal quickly. Yet Congress allowed the aid to lapse despite bipartisan support for opening it back up. Small business owners waited another five months before lawmakers passed legislation that reopened the program.

Local organizations in communities across the country attempted to help fill the gap over the past several months by soliciting donations. In Carlisle, a merchant group is raising money to buy gift cards from borough businesses, which are in turn donated to front-line workers or local charities.

What's in the new version?

Several changes proposed by both Republicans and Democrats, including President-elect Joe Biden, made it into the final bill that passed in December, creating a program that targets those business owners most in need. Employers with more than 300 workers are excluded from the second round. Lawmakers also carved out $12 billion for minority-owned businesses. Restaurants and lodging businesses may now apply for bigger loans, equal to 3.5 times monthly payrolls.

But for others, the sizes of the loans will remain the same, based on 2.5 times average monthly payroll expenses as they were before, even though it remains unlikely that the economy will be back to normal by the spring.

Since the summer, revenue for small businesses has continued to fall. It's currently down 32% compared with a year ago, and the number of small businesses open and operating is down nearly 30%, according to Opportunity Insights, a project at Harvard University tracking the recovery.

How the money will get out

The lending program reopened to some lenders Monday, about three weeks after Congress passed the bill. During the first few days, only community financial institutions, which mostly work with very small and often minority-owned businesses, will be able to make loans.

Other lenders will likely have to wait until next week, in an attempt to give mom-and-pop shops a leg up they didn't receive last time, when the system was overrun by large businesses at the start.

"It's not a silver bullet for smaller businesses. But they hopefully can get a bunch of their applications in before the system is overwhelmed," said Jeannine Jacokes, CEO of the Community Development Bankers Association.