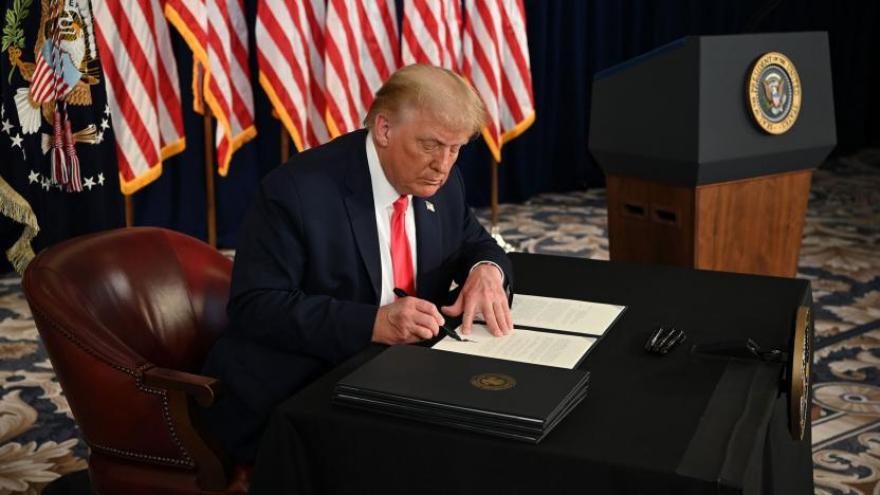 (CNN) -- President Donald Trump took a dramatic step last month to bypass Congress and deliver relief to millions of Americans -- but the executive actions are delivering only limited relief, while lawmakers remain at an impasse.

The main piece of the package was a $300 weekly unemployment supplement, paid from federal disaster relief funds. While some states have been approved for the unemployment aid, many jobless Americans are still waiting for the cash, more than a month after the last federal bump of $600 went out.

Trump's other big move, a payroll tax deferment set to start Tuesday, isn't automatic. Many businesses have suggested they'll opt out and even those workers who do see bigger paychecks now will owe more in taxes next year.

Trump's actions were limited in scope to begin with. They didn't send out a second round of stimulus checks or disburse more funding for small businesses. The President can't authorize such big spending because the power of the purse lies with Congress.

It's becoming clear that the stopgap provided by the President won't be enough to keep the economy afloat. More than 1 million people filed for new unemployment claims in each of the last two weeks and the unemployment rate remains above 10%, higher than it was at any point during the Great Recession.

Nearly half of small business owners think it will take at least six months before business returns to normal, according to a Census survey.

What's needed is an act of Congress, many economists argue. Lawmakers on both sides are considering extending the federal boost to unemployment, small business loans and sending out a second round of stimulus checks. But Democrats, who control the House, and the Republican-led Senate remain about $1 trillion apart on a top line number.

Senate GOP leaders are planning to put an even smaller version of their stimulus bill to a vote this month, but the plan would have virtually no chance of becoming law given stiff opposition from Democrats.

Lawmakers return from recess this week for the first time since early August when talks stalled, prompting Trump to sign the executive actions.

Here's why some of the President's actions are falling short.

One of the President's executive actions is meant to replace the $600 federal boost that had been approved by Congress in late March, which expired July 31.

Without Congress, Trump had to divert disaster relief funds from FEMA for the program, which limits the money for the benefits. Instead of $600 a week, it provides for a $300 boost -- though states have the option to chip in another $100.

The money is expected to provide only four to five weeks of supplemental payments. It depends on how many states apply for the funding. As of Monday evening, 40 states had been approved.

But it's going to take some time before for the money reaches people's accounts in many states. Their systems are already backlogged due to the overwhelming demand and new procedures have to be created for Trump's benefits because the funding source is different.

Only Congress can waive taxes, so Trump's payroll tax measure only defers when they are due. Employers are allowed to lower workers' payroll taxes starting Tuesday. Those workers will see a bigger paycheck now, but will owe the taxes next year.

But employers can choose not to reduce the amount deducted from workers' paychecks, too. Many business leaders have already pushed back against it.

The deferment could offer a short-term boost for some, but it provides no help for the 27 million Americans out of work right now.

Congress established a national eviction moratorium in an earlier aid package passed in March, but the protections expired before the end of July.

This week, the US Centers for Disease Control and Prevention established a new moratorium on evictions for renters that's even broader than what expired earlier in the summer -- which only protected those in federally backed units.

This moratorium will last until January and applies to Americans who earn less than $99,000 a year and can prove they can't pay their rent because of financial hardship due to Covid-19.

Housing experts say the move will deliver much needed relief to struggling renters. But people will likely still owe back rent starting next year.

It falls short of a Democrat-backed proposal of setting aside federal dollars for rental assistance. But providing that kind of money would require an act of Congress, which has so far deadlocked on additional stimulus measures.

Trump also extended the student loan relief set to expire come October to the end of the year -- a move that doesn't require any congressional authorization.

That means borrowers with federally-held student loans don't have to make payments -- without interest accruing -- until December 31. Their balance will be the same then as it was in March.

People already enrolled in the Public Service Loan Forgiveness Program also won't have to make payments and will still receive credit toward the forgiveness program as if they had, as long as they are still working full time for a qualifying employer.