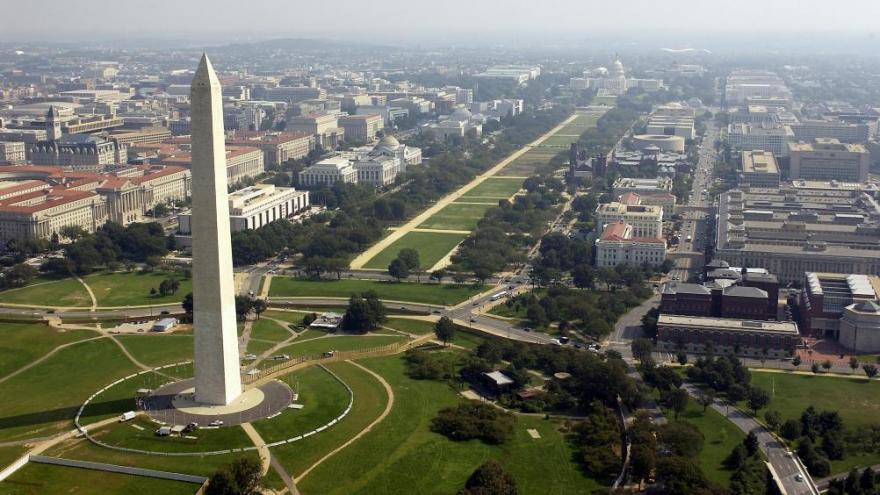 Aerial photo of the Washington Memorial with the Capitol in the background in Washington D.C. on September 26, 2003.

(CNN) -- The massive legislation package passed by Congress Monday night also greenlights the establishment of two long-awaited Smithsonian museums in the nation's capital: one focused on American Latinos and another dedicated to American women's history.

Though the museums could take years to conceptualize, curate and build, Congress' approval is a victory for the museums' advocates whose efforts date back decades.

The Smithsonian Women's History Museum Act and the National Museum of the American Latino Act were folded into the massive legislation that included Covid-19 relief and government funding. A lone Republican senator, Mike Lee of Utah, blocked the two bills from passage earlier this month.

The American Latino museum will "illuminate the story of the United States for the benefit of all by featuring Latino contributions," decades after the Smithsonian issued a report finding that it displayed a pattern of "willful neglect," excluding and ignoring the presence and contributions of Latino Americans in both its workforce and exhibition halls.

The American women's history museum will be devoted to the documentation of women's contributions throughout the nation's history and recognize "diverse perspectives."

The Smithsonian Institution said in a statement that it is "reviewing the legislation carefully."

"The Smithsonian has unparalleled experience building national museums, and is already doing significant work to tell the stories of American Women and Latinos. We look forward to building two world-class museums to further amplify these stories and help our country learn more about the impact that women and Latinos have had on the fabric of our nation," the Smithsonian said in a statement provided to CNN Tuesday.

Democratic Sen. Bob Menendez of New Jersey, a longtime advocate for a Latino museum and the lead sponsor of the Senate bill, said that the museum's passage is the "culmination of decades of hard work, advocacy, successes and setbacks in the movement to recognize Latino contributions to America's history, economy and culture."

"With this vote, Latinos and Latinas across our nation will finally have their stories, struggles, and impact on our country validated by the United States Congress," he said in a statement Monday.

Menendez said he "cannot wait until the day when I can take my granddaughters to visit the National Museum of the American Latino in our nation's capital."

Half of both museums' funding will be provided by federal funds and the other half from private donations. The museums have two years to designate a site.

Two vacant sites on the National Mall will be considered as potential locations for either the Latino or the women's museum: the southern part of the National Mall close to the US Holocaust Memorial Museum bordered by 14th Street and Jefferson Drive, or the northwest part within walking steps of the US Capitol, enclosed by Constitution Ave and Pennsylvania Ave.

The Arts and Industries Building of the Smithsonian Institution or the area between 12th Street and 14th Street on the National Mall will also be considered for the new Latino museum.

In 2011, a 23-member presidential commission estimated that a "Smithsonian American Latino Museum" would cost $600 million divided between private donations and congressional appropriations.

The Congressional Budget Office estimated last year that a women's museum would cost $375 million over a nine-year period, with construction of the museum adding up to $242 million, and staffing, exhibits and program creations and operations pricing out to be $133 million.

"For too long, women's stories have been left out of the telling of our nation's history, but with this vote, we begin to rectify that," Democratic Rep. Carolyn Maloney of New York said in a statement.

"Americans of all ages deserve to see and be inspired by the remarkable women who helped shape this nation -- seeing role models doing the thing to which we aspire, can change the course of someone's life," she added.

She noted it was "fitting" that Congress authorized a women's history museum as the US marked the centennial of the 19th Amendment and elected its first female vice president, Kamala Harris.

The most recent Smithsonian museum was the National Museum of African American History and Culture, which took years from the time it was approved by Congress in 2003 until it was finally opened to the public in 2016.

The Democratic-led US House had approved the bill for a women's museum in February and the bill to establish a Latino museum in July by voice vote.

In the US Senate, however, passage of these two bills by unanimous consent was blocked by Lee, who argued that the US does not need "separate but equal museums."

The massive spending bill -- and the museum legislature -- heads to President Donald Trump's desk for his signature.