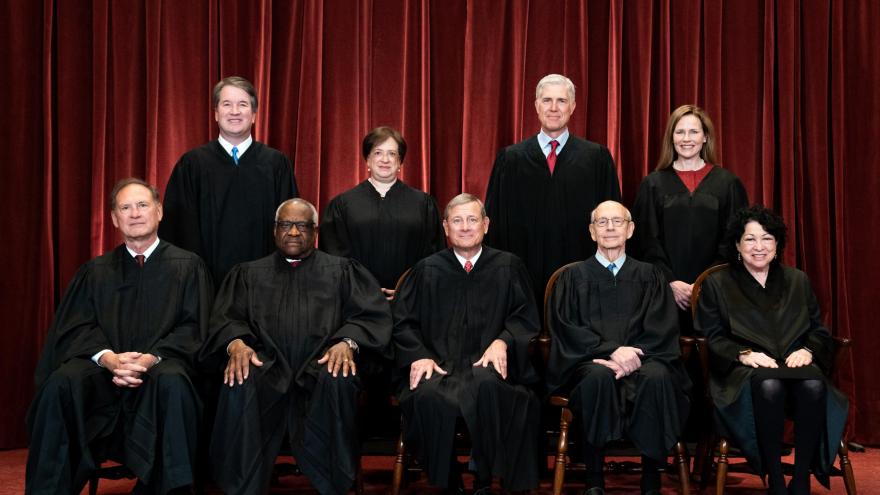 (CNN) -- Judge Ketanji Brown Jackson, a groundbreaking nominee, appears before senators Monday for a seat on a Supreme Court that itself has been moving in reverse.

The court has allowed Texas to ban abortions since September and appears on the cusp of obliterating a half-century of reproductive rights nationwide. It has retrenched on voting rights protection and racial remedies. And it has increasingly sided with conservative believers in disputes over the separation of church and state.

Jackson's hearings will showcase her status as the first Black woman nominated to the high court. Yet the televised sessions will also bring into national focus the trajectory of America's highest court, now controlled by a conservative supermajority.

Solidified by the 2020 succession of Amy Coney Barrett to the late Ruth Bader Ginsburg's seat, the majority is likely to produce an even greater sea change in American law by the summer when its current session ends.

Republican-appointed conservatives see their efforts as correcting the past course. On abortion rights, Justice Neil Gorsuch wrote two years ago that "in a highly politicized and contentious arena ... we have lost our way."

Liberals counter today that the sudden change brought about by new justices undermines the court's institutional legitimacy. During December arguments in a Mississippi abortion ban dispute, Justice Sonia Sotomayor observed that state officials believed their law would be upheld because of the court's new members.

"Will this institution survive the stench that this creates in the public perception that the Constitution and its reading are just political acts?" she asked.

The Senate Judiciary Committee hearings may provide an early glimpse into how Jackson, 51, would view her place on the court's diminished liberal wing and how she might work with colleagues on both sides of the ideological divide.

President Joe Biden chose Jackson to succeed the retiring Justice Stephen Breyer. She is a former federal public defender who has sat on lower US courts for nearly a decade. The Harvard Law graduate also served early in her career as a law clerk to Breyer.

Not since 2010, and the nomination of Elena Kagan, has a Democratic nominee been before the Senate Judiciary Committee. (In 2016, President Barack Obama selected Merrick Garland for a vacancy created by the death of Justice Antonin Scalia, but the Republican-controlled Senate refused to hold hearings or act on the nomination.)

Kagan joined a 5-4, conservative-liberal bench, and in the 12 years since, the rightward thrust has only deepened, on abortion, religious liberty and voting rights. The 2013 Shelby County v. Holder decision has especially defined the court under Chief Justice John Roberts. It eliminated a section of the 1965 Voting Rights Act that required states and localities with a history of discrimination to seek approval from the Department of Justice before changing election rules.

That decision and others, including those allowing extreme partisan gerrymanders and big spending in elections, have lowered the guardrails of democracy. At the same time, states have increasingly passed regulations for the polls, and federal legislation to safeguard voting rights has stalled in Congress.

Last month, when the justices summarily reinstated an Alabama congressional map that a lower court found had diluted the voting power of Blacks in the state, Kagan lamented a further undermining of the Voting Rights Act, "a law this Court once knew to buttress all of American democracy."

A new kind of Republican control

Republicans have dominated the Supreme Court for decades, simply by virtue of who held the White House and when vacancies occurred on the bench. Since 1969, when the liberal tenure of Chief Justice Earl Warren ended, 19 new justices have been seated, 15 of them appointed by Republican presidents, four by Democrats.

But the Republican appointees were varied enough that their political and ideological identities did not always align, as with GOP-appointed liberals Harry Blackmun, John Paul Stevens and David Souter. (Chief Justice Warren himself was an appointee of Republican President Dwight Eisenhower.)

Such variation has evaporated, overtaken by the diligent ideological screening that former President Donald Trump and his recent GOP predecessors conducted with the assistance of the Federalist Society and outside advocates.

Democrats like Biden have sought out liberal jurists, yet simultaneously looked for diversity. Jackson would be the first Black woman on the Supreme Court in its 233-year history.

The new majority's suspension of abortion rights has been one of the most startling developments. Last September, the court refused to block a Texas statute that bans abortions at roughly six weeks, before most women know they are pregnant.

The law defies the 1973 Roe v. Wade decision that made abortion legal nationwide and barred government from imposing an undue burden on women seeking to end a pregnancy before the fetus is viable, at about 23 weeks.

Abortion clinics in Texas, along with the US Department of Justice, asked the Supreme Court to block the law, without success. (The Texas Supreme Court this month foreclosed a related challenge, and pregnant women in Texas have been traveling to nearby states, for medical care.)

Separate to the Texas case, the Supreme Court is currently weighing the constitutionality of Mississippi's 15-week ban on abortions. State officials have asked the justices to use the case to completely overturn Roe v. Wade.

Other Republican-led states have taken a page from Mississippi. The Florida Legislature earlier this month passed a 15-week ban. In response, Biden tweeted, "My Administration will not stand for the continued erosion of women's constitutional rights."

The Supreme Court majority will have the last word on whether a right to abortion remains, as the court found in 1973, grounded in the 14th Amendment's liberty guarantee.

Religion necessarily colors disputes over reproductive rights, and it has become a dominant theme at the transformed court. Some justices have complained that religious liberties are under siege. In a 2020 speech to the Federalist Society, Justice Samuel Alito used Covid-19 rules, including capacity limits on worship services, as an example.

"The pandemic has resulted in previously unimaginable restrictions on individual liberty," he said.

Yet the conservative majority has sided with religious groups challenging Covid-19 restrictions and, more broadly, exempted religious believers from myriad government regulations. In 2020, it sided with the Trump administration as the administration bolstered the ability of private employers to opt out of Obamacare birth control coverage in employee insurance plans based on religious or moral objections.

The nation's first Black woman justice would be joining a bench scheduled to plunge immediately into new racial dilemmas. The justices said they would revisit prior decisions allowing colleges and universities to consider applicants' race as one of many criteria to achieve campus diversity.

A group called Students for Fair Admissions is challenging racial affirmative action policies at Harvard and the University of North Carolina. Those cases will be heard in the 2022-23 session that begins in October.

Even before the Supreme Court's conservative supermajority was clinched by the Trump appointees, the justices had rejected certain racial remedies, including public school voluntary-integration plans. Roberts wrote in that 2007 case, rejecting plans that considered students' race in school assignment: "The way to stop discrimination on the basis of race is to stop discriminating on the basis of race."

But the court (over the chief justice's dissent) had narrowly upheld college affirmative action. Such practices appear ripe for reversal now, with the 2018 addition of Brett Kavanaugh for retired Justice Anthony Kennedy and with Barrett for Ginsburg. Kennedy and Ginsburg had previously voted to allow affirmative action.

The new majority is also likely to continue to scale back the 1965 Voting Rights Act with the redistricting controversy already accepted for the 2022-23 session. (In 2021, the court spurned voting rights concerns and upheld Arizona measures that required ballots cast by people at the wrong precinct to be wholly discarded and that separately criminalized third-party collection of absentee ballots, for example, from residents at a nursing home.)

In the Alabama redistricting dispute added to the justices' upcoming calendar, a special three-judge panel said the state should have created a second majority-Black district, based on the Black population and its geographic compactness.

The lower federal panel said of the disputed map (which the Supreme Court revived), "Black voters have less opportunity than other Alabamians to elect candidates of their choice to Congress."

A separate high court development could affect future federal elections, including presidential contests. As the justices earlier this month rejected Republican challenges to congressional maps in North Carolina and Pennsylvania, four conservatives expressed interest in a theory that would give state legislatures full control over how their federal elections are conducted, without any check by their own state courts and state constitutions.

That controversial doctrine, pressed by Trump lawyers in 2020, could have upended the results of the last presidential election and could affect what happens in 2024.

"We will have to resolve this question sooner or later," Alito wrote on March 7, dissenting from a court order declining to intervene in the North Carolina case, "and the sooner we do so, the better."