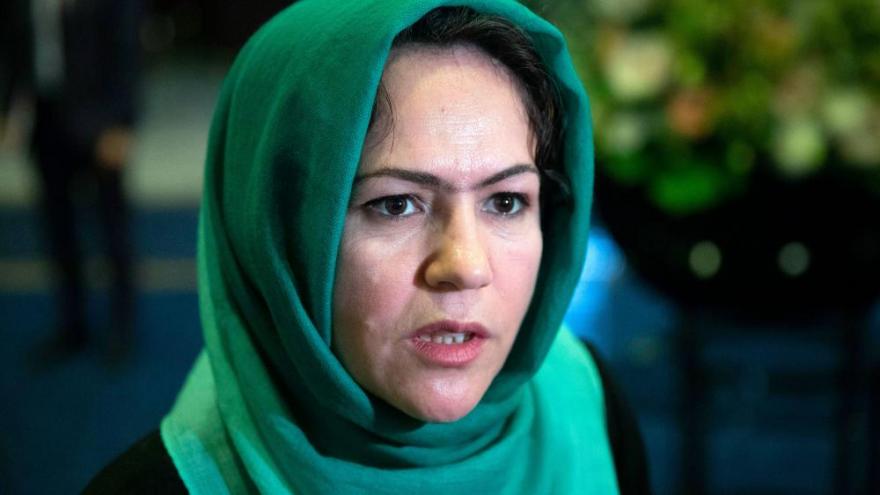 Concerns mount that US withdrawal from Afghanistan could risk progress on women's rights. Fawzia Koofi is a member of Parliament who has survived two assassination attempts -- at least one by the Taliban.

(CNN) -- Concerns are mounting from bipartisan US lawmakers and Afghan women's rights activists that the hard-won gains for women and civil society in Afghanistan could be lost if the United States makes a precipitous withdrawal from the country.

President Joe Biden has suggested it will be difficult to meet the May 1 deadline for US troops to leave the country as dictated in the deal the Trump administration signed with the Taliban. However, there are fears that if the US withdraws troops before the conditions on the ground are right -- regardless of the date on the calendar -- there will be a sharp and possibly catastrophic backslide.

"Today women in Afghanistan have a very special place. They are stronger than ever and they have achieved what has never been achieved before: they cannot be ignored. They will not be ignored," Fatima Gailani, an Afghan women's rights activist and one of the four women on the Afghan government's negotiating team, said at a recent congressional Women, Peace, and Security Caucus virtual discussion.

Fawzia Koofi, one of the other women on the government's team for talks with the Taliban, recalled that "in 2001, when the Taliban government was thrown out of power, I along with thousands and millions of Afghans could walk in the streets of Kabul freely without the fear of being whipped or beaten up for what I wear."

"Afghanistan has transformed and we have all invested blood and treasure to bring Afghanistan to where it is," she said.

Gailani told those at the virtual discussion that an American troop withdrawal from the country must be "extremely careful." Koofi's assessment: "If the US leaves now, it will not result in peace."

Republican Rep. Michael Waltz of Florida, who serves as co-chair of the Women, Peace, and Security Caucus, said when he served in Afghanistan as a Special Forces officer he saw "girls schools machine gunned with the girls in them."

"I've seen acid thrown on their faces," he said. "We've made tremendous gains. We need to protect those gains."

Sen. Jeanne Shaheen, a New Hampshire Democrat, told CNN that she's "very concerned" that the gains made by women in Afghanistan will not be protected if the US withdraws.

"We have, I believe, not just a human rights imperative to support women -- it's been part of what we've done since we got into Afghanistan -- but it's also about ensuring the stability, the future stability of the country in any agreement," she said.

Democratic Rep. Lois Frankel of Florida, who is the other co-chair of the Women, Peace and Security caucus, also expressed concerns that the "gains made by women over the past years could evaporate."

"We don't want to go backwards," she said, adding that concerned members of Congress would "work closely with our administration to do everything that's reasonably possible to make sure that the progress made for human rights in Afghanistan continue."

Biden administration officials have repeatedly stressed that any agreement between the Afghan government and the Taliban must protect human rights, particularly the rights of women and minorities. US-backed intra-Afghan negotiations formally kicked off in Doha last September but have moved slowly, and targeted killings and attacks on civilians and Afghan security forces by the Taliban have continued -- the State Department said this week "levels of violence are unacceptably high."

'They are the first people to suffer'

Shaharzad Akbar, the chair of the Afghanistan Independent Commission on Human Rights, also noted that negotiations -- including a meeting in Moscow last month -- have not included a fair gender balance.

"A process that excludes women or tokenizes their participation will lack credibility and fail to inspire public confidence," she told the UN Security Council in March.

Annie Pforzheimer, a retired US career diplomat who was deputy chief of mission in Kabul from 2017-2018 and acting deputy assistant secretary of state for Afghanistan until March 2019, told CNN that "there is a difference between saying that you want to protect the rights of women and then taking actions which genuinely would do so."

"So far, the current administration is still taking the right actions," said Pforzheimer, who is now with the Center for Strategic and International Studies.

"What I am concerned about is the idea that they would put just a new deadline on a troop withdrawal, another date on a calendar versus making it conditions-based," she explained. "If it's conditions-based, then I think that they have increased their leverage on the parties, and they are better able to protect the rights of women, minorities and young people."

Pforzheimer said those conditions need to include a ceasefire and "should also include the beginnings of a social agreement on that outline of a political road map." She noted that "if, for example, a peace deal that is seen as unfair takes hold it won't really be a peace deal at all, it will simply be the prelude to widespread fighting."

Akbar warned that "a rushed process could tip the country back into full scale war," adding that "any settlement that excludes the wider public will almost certainly be short-lived and is unlikely to lead to lasting peace."

Concerns are widespread that a hasty US withdrawal without a durable peace agreement in place could plunge Afghanistan into civil war.

"The rights of women, young people, minorities ... they are threatened by violence, even if it's a violence from civil war versus violence that's specifically targeted at them," Pforzheimer said. "They are the first people to suffer."

In a bid "aimed at accelerating discussions on a negotiated settlement and ceasefire," Secretary of State Antony Blinken recently laid out a series of proposals in a letter to Afghan President Ashraf Ghani, including a pitch for an interim power-sharing agreement.

"I'm just appalled that we would, the United States of America would propose dissolving a constitutionally, democratically elected government that we have fought so hard to defend. And a key piece of that is women's rights," he said.

Moreover, there is strong skepticism over whether the Taliban can be trusted to uphold its commitments to cut ties with terrorist groups like al Qaeda and to protect the rights of women and minority groups in the country.

"The Taliban clearly has not been willing to even consider the importance of protecting the rights of women," Shaheen told CNN, adding that she also has not seen "any real signs that the Taliban are willing to cut those links with al Qaeda."

"If the Taliban thinks we're not committed to ensuring a stable Afghanistan in the future, they're just going to wait us out, and they can wait longer than we can, at least that's what their perspective seems to be," she said.