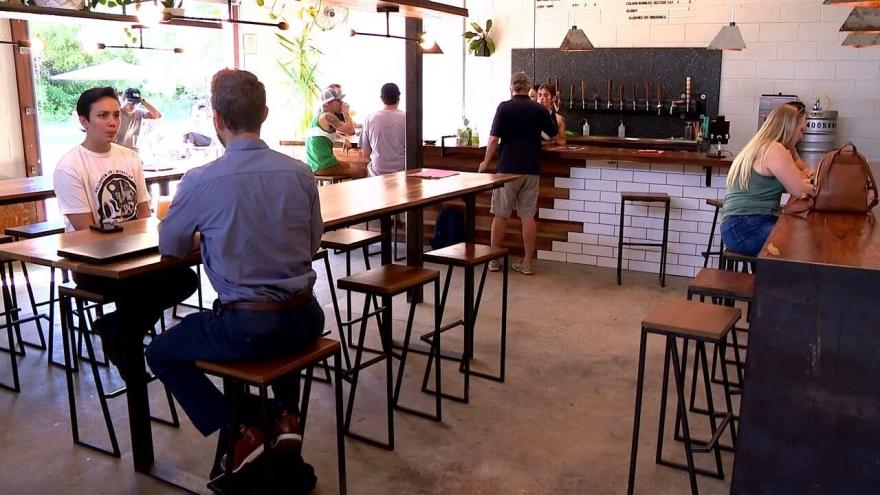 ASHEVILLE, North Carolina (WLOS) -- A national shortage of carbon dioxide has led to some panic among breweries – a few even making the call to close their doors while they assess the situation.

The already-mounting issue was made worse by the recent shutdown of one of the country’s largest gas production hubs because of reports of contamination.

Commonly referred to as "Beer City," Asheville (and its surrounding areas) is ripe with breweries. Local brewers, like Whit Lanning, are preparing for the shortage.

“It’s one of the most important ingredients in beer,” Lanning said of carbon dioxide.

Lanning, co-owner and brewer at Burning Blush Brewery in Mills River, said he does not use as much CO2 as other brewers. Lanning uses naturally occurring carbon dioxide let off during the fermentation process to carbonate his beer. He is also not dependent on CO2 for pouring a pint; he has a unique approach.

“It’s a really cool European concept,” Lanning said. “It’s a Mylar bag, so I’m actually able to use an air compressor to push on this bag that sits in the vessel of the serving tank, and it squishes the beer to move through the tap lines.”

Over at New Origin Brewing Co., founder and brewer, Dan Juhnke said they use a decent amount of the gas. From purging during the canning process, to carbonation and beer transfers.

“Now that I’m thinking about it, the biggest problem that we would have is running our draft system if we run out, because our draft system literally uses a lot of CO2. And if we didn’t have CO2 for that, we wouldn’t be able to pour beer,” Juhnke said. “Maybe, it is time to panic!”

Juhnke said they get their CO2 tank filled twice a month. So far, they have had no impact from the shortage. If it hits, he said they will adjust their process.

“If we can’t get CO2, it’s going to be a problem,” Juhnke said. “We’re going to have to come up with some solutions.”

Juhnke and Lanning said they get their carbon dioxide from Holston Gases. According to Juhnke, a representative with the company told him their main CO2 supply has been exhausted, but they have backup plans in place, and none of their customers have been impacted.