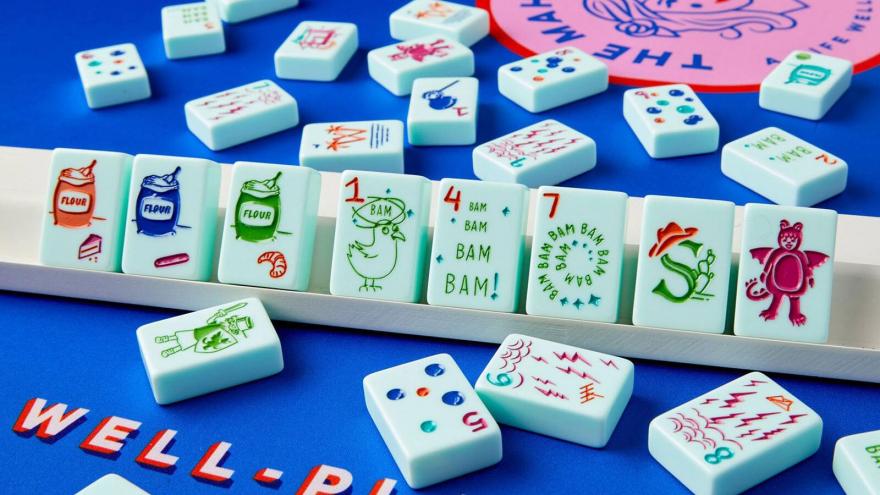 The Mahjong Line apologizes after critics say its game designs were culturally insensitive.

The Mahjong Line started selling its limited-edition versions of the game -- with names like "The Minimal Line," "The Botanical Line" and "The Cheeky Line" -- in November for between $325 and $425.

The Cheeky Line, for instance, replaces traditional Chinese symbols with bubbles, lightning bolts and has tiles decorated with bags of flour and a Whoopie cushion.

The designs and the website's language didn't sit well with many people on social media, who said the removing the Chinese characters erases the cultural importance of the game.

"My culture is one of the oldest civilizations in the world. It is a product of thousands of years of tradition and history. My culture not some cheap coloring book that can be filled-in and be 'made pretty' by the standards of privileged teenyboppers," wrote Jeremy Lee in a tweet that had thousands of interactions.

The company posted an apology and updated much of the language its website on Wednesday and removed a photo of the three women who founded the company from its About page. The company has not stopped selling any of its games.

"While our intent is to inspire and engage with a new generation of American mahjong players, we recognize our failure to pay proper homage to the game's Chinese heritage. Using words like 'refresh' were hurtful to many and we are deeply sorry," the company wrote.

"It's imperative our followers know we never set out to ignore or misrepresent the origins of this game and know there are more conversations to be had and steps to take as we learn and grow. We are always open to constructive criticism and are continuing to conduct conversations with those who can provide further insight to the game's traditions and roots in both Chinese and American cultures."

Why the company decided to 'refresh' the tiles

American mahjong is similar to rummy, but it is played with tiles instead of cards, according to the National Mahjong League. It is a variation on the game that was created in China in the 1800s.

Kate LaGere, one of the company's founders, decided the "venerable game needed a respectful refresh" because the game's traditional tiles "did not reflect the fun that was had when playing with her friends" and did not "come close to mirroring her style and personality," according to an archived version of the company's website.

Lee, who works for an affordable housing developer in San Francisco's Chinatown, told CNN that he was appalled by the changes.

"This is a product with hundreds of years of tradition and culture and every piece has a meaning in, and it's just a complete disregard for any of that," he said.

Lee said his mother taught him how to play mahjong when he was a child.

"Every time my family gets together, we take out the tiles and we play," he said. "It's a way that I stay in touch with my culture."

Yuelin Ge, a Chinese-Canadian graduate student in Toronto, posted an open letter to The Mahjong Line's founders on Twitter.

"I am beyond disappointed in the atrocity that you made. Sorry, was MY CULTURE too boring for you and not trendy enough?" she wrote.

She told CNN that they didn't have to insult the traditional game to justify their designs.

"They said, you know, 'We're we're creating this based on the fact that we were bored with previous designs, we didn't feel like they were, you know, exciting enough or fresh enough," she said. "Which completely negates the fact that the original design has been there since, honestly, there are some variations (of the game) since like the 1800s."

Ge thought the company's apology was somewhat lackluster and said she hopes they will listen to the criticism and give Asian people meaningful roles in their leadership team.

The Mahjong Line is continuing to sell all its sets on its website.

"We stand by our products and are proud to be one of the many different companies offering a wide range of tiles and accessories for the game of American mahjong," LeGere said in a statement. "That being said, we take full responsibility that in our quest to introduce new tiles we unintentionally recreated an experience shared by many Asian Americans of cultural erasure and are working to correct this mistake."