Companies aggressively marketed baby formula. Then there was a shortage 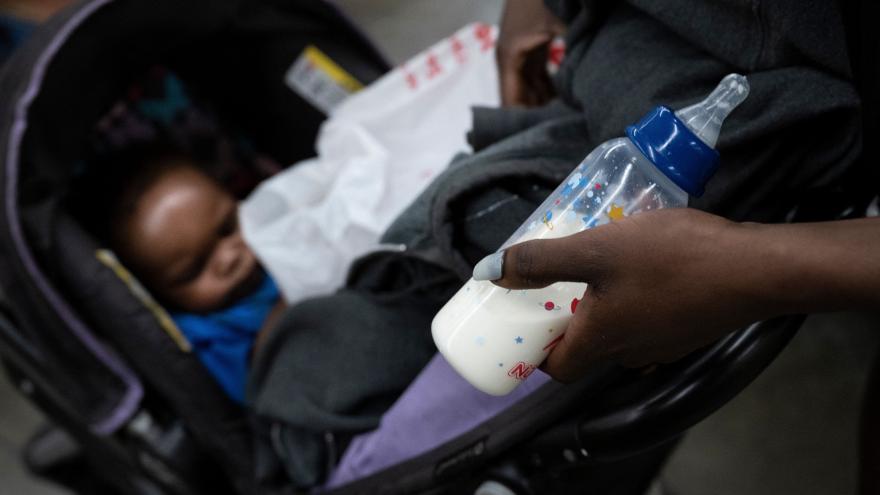 (CNN) -- The baby formula shortage in the United States has left many mothers and families desperately scrambling to feed their infants.

The shortage has been made more acute by the low rate of breastfeeding in the country compared to most industrialized nations, health researchers say, which has made the United States especially vulnerable to shocks in the highly concentrated market for formula.

A major part of the problem, these experts say, is baby formula manufacturers' aggressive marketing and promotional practices, which undermine breastfeeding practices for new mothers and influence their decisions to use formula. The United States takes a lax approach to formula marketing, unlike many other countries.

"Formula milk marketing -- powered by enormous budgets and the deliberate misuse of science -- is driving over-consumption of formula milk and discouraging breastfeeding," the World Health Organization and the United Nations Children's Fund found in a February report.

To be sure, formula is a crucial, life-saving option for parents who are unable to breastfeed or who can't take time off work to do so. But there are concerns that the industry is marketing it to people who don't need it.

Infant formula makers, however, say they are providing a safe, nutritious option for babies who can't or do not receive breast milk.

"Mothers should be encouraged and supported to breastfeed," said a spokesperson for the Infant Nutrition Council of America, a trade group representing formula makers. "However — if breast milk is not available or not chosen — parents should have access to accurate, balanced information on all appropriate infant feeding options."

"Marketing influences social norms by making formula use seem to be extensive, modern, and comparable to or better than breast milk," according to the findings of a 2015 published study in the journal Food and Nutrition Bulletin. "Clear evidence of a negative impact is found when [formula is] provided for free in maternity facilities and when they are promoted by health workers and in the media."

Unlike many other countries, the United States does not regulate most marketing practices of the baby formula industry. It did not sign on to the World Health Organization's International Code of Marketing of Breast-Milk Substitutes established in 1981 that prohibits marketing infant formula to the public. The Code was developed due to the negative correlation between formula marketing and breastfeeding rates.

"The failure of the United States to regulate the marketing practices of the $55 billion formula industry has meant that families in our country are not supported and protected against exploitative messaging at vulnerable times in their lives," said Amelia Psmythe Seger, the deputy director of the U.S. Breastfeeding Committee.

The committee has called for stricter regulations, enhancing a national network of nonprofit donor milk banks and policies such as national paid family leave to improve infant nutrition security.

A spokesperson for the Infant Nutrition Council of America, the group representing formula manufacturers, said that its member companies support and promote the "aims and principles" of the WHO Code. Formula makers "have extensive internal approval and audit ‎processes in place" ‎‎to ensure their practices meet all legal, regulatory ‎and nutritional ‎science ‎requirements.‎

Formula companies in the past have focused their efforts on getting products to new mothers while they're still in hospitals, the crucial window for breastfeeding that determines how successful moms are once they return home.

"The linchpin of their marketing strategy is to get free samples into the hands of breastfeeding mothers," said Melissa Bartick, an assistant professor at Harvard Medical School. "What they hope will happen is if a breastfeeding mother runs into any trouble at all she will have formula already in a bottle and ready to put in her baby's mouth."

This is a "vicious cycle," she said, because the more often mothers breastfeed, the more milk they produce. "If a mom starts using formula, her body will make less milk....Before you know it her milk production will shut down and she becomes dependent on giving formula."

More recently, digital marketing aimed directly to pregnant women online is also driving their decisions to use formula, according to an April WHO report.

Formula companies use tools like apps, online support groups or "baby clubs," paid social media influencers and promotions to cast doubt on the benefits of breastfeeding and advantages of formula, the report found.

The tactics are part of larger environment in the United States in which breastfeeding has become a struggle for new mothers.

Although 84% percent of babies in the United States start out being breastfed, just a quarter of infants are exclusively breastfed at six months, according to the latest data from the Centers for Disease Control. Black infants have lower breastfeeding rates than White infants.

The American Academy of Pediatrics recommends exclusive breastfeeding of infants for the first six months of their lives.

"There is no need to introduce infant formula or other sources of nutrition for most infants," the organization said in a policy statement this week calling for more support for breastfeeding mothers

Breastfeeding has been linked to a range of short and long-term health benefits in infants, including decreased rates of lower respiratory tract infections, severe diarrhea and other conditions. It also carries benefits for mothers, including a reduced risk of breast and ovarian cancer and type 2 diabetes.

Savvy marketing is, of course, not the only reason why mothers turn to formula.

Most babies in America are not born in hospitals that are "Baby-Friendly," the global standard set to support breastfeeding. Baby-Friendly hospitals employ strategies to promote breastfeeding, such as uninterrupted skin-to-skin contact right after birth, and they do not allow formula except for medical reasons.

After moms leave the hospital, it often becomes difficult to breastfeed -- particularly for low-income mothers. Participants in the Special Supplemental Nutrition Program for Women, Infants, and Children (WIC) account for more than half of infant formula used in the United States.

The United States does not have national paid maternity or family leave. Many workplaces have inadequate pumping stations or none at all, and breastfeeding in public is often stigmatized.

"It's very hard to be a breastfeeding mother in the United States," said Bartick.