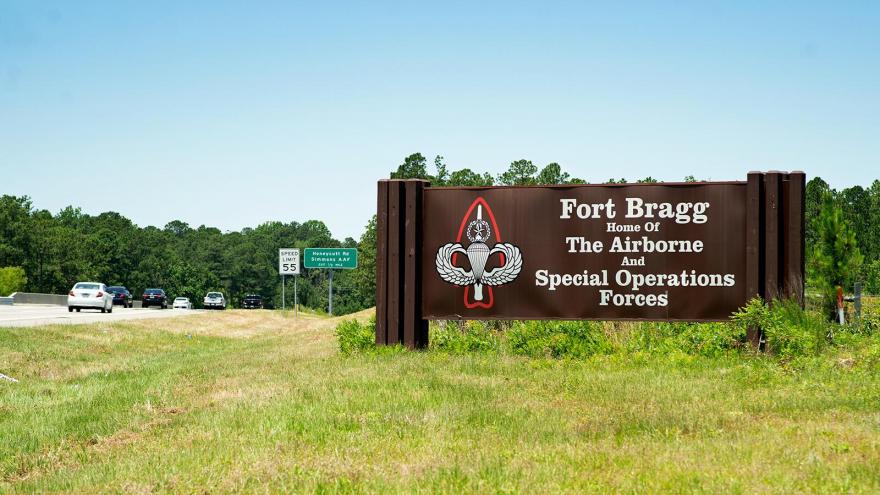 A sign identifies the Fort Bragg Army Base, named for Confederate General Braxton Bragg. The base has recently been listed for possible renaming.

(CNN) -- The congressional naming commission which was set up to remove Confederate names from military bases will review the names of "more than 750 Department of Defense items" that include everything from military bases to streets and bridges, to determine whether their names "commemorate the Confederacy," a release from the Commission announced Wednesday.

The Commission, established by the 2021 National Defense Authorization Act in the face of fierce opposition from former President Donald Trump in 2020, was originally tasked to rename nine military bases and sites associated with the Confederacy, as well as other Defense Department assets with names commemorating the Confederacy.

The list of more than 750 items includes not just the nine military bases but also roads, signs, bridges, and fields on bases and military installations across the US and two items at a US naval base in Japan.

The list is as detailed as naming stickers, flyers and posters on certain military installations that need to be reviewed, including "window decals at Ozark and Enterprise gate Welcome Centers" at Fort Rucker in Alabama and "mechanical room signage" at Fort Benning in Georgia.

"We will update the inventory list in collaboration with the Department of Defense, including its sub-agencies and the military branches, as we continue to identify assets within our area of consideration," retired Adm. Michelle Howard, chair of the Naming Commission, said in the release. "This work is vital to understand the scope and estimated cost of renaming or removing Confederate-named assets and will enable us to provide the most accurate report possible to Congress."

The Secretary of Defense will have the final say in the renaming of bases. The commission recommendations are to include assessments of how local communities may be impacted by any changes.

The commission's final recommendations to Congress are due on October 1.