Commission to allow Pence to debate without plexiglass barriers around him 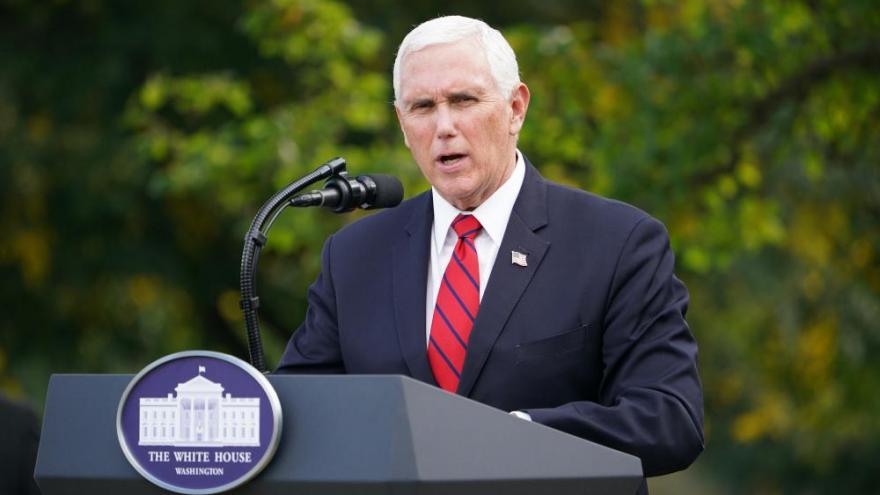 US Vice President Mike Pence speaks on Covid-19 testing in the Rose Garden of the White House in Washington, DC on September 28, 2020.

(CNN) -- The commission organizing general election debates will allow Mike Pence to participate without plexiglass barriers around him at Wednesday's contest after the vice president's team objected to their planned use, a member of the debate commission tells CNN. But Kamala Harris and the debate moderator will be allowed to erect barriers separating them from the vice president.

The plexiglass dividers, which were announced by the commission on Monday night, were the latest in a string of changes made to ensure the virus is not spread at the debate as the White House deals with a growing number of infections inside Donald Trump's administration.

Harris "is the one who wanted plexiglass, so if she has plexiglass surrounding her so she is cut off from everyone else, that is fine," said the commission member. "If (Pence) doesn't want plexiglass, that is up to him."

Multiple Pence aides told CNN on Tuesday that the vice president does not want plexiglass barriers around him at the debate in Salt Lake City, rebuffing an announcement from the Commission on Presidential Debates that the dividers would be used to prevent the spread of the coronavirus.

"We have yet to hear medical evidence what the plexiglass is for," Pence's chief of staff Marc Short told CNN.

The Harris campaign had thought the use of plexiglass was a settled issue, but said she would be at the debate.

"Senator Harris will be at the debate, respecting the protections that the Cleveland Clinic has put in place to promote safety for all concerned," said Sabrina Singh, a Harris campaign spokeswoman. "If the Trump administration's war on masks has now become a war on safety shields, that tells you everything you need to know about why their Covid response is a failure."

Physical barriers like plexiglass are typically recommended when social distancing cannot be maintained. The candidates will be separated by 12 feet on stage. Masks are considered the best defense against both droplet and aerosolized transmission of the virus.

Debate organizers are requiring that anyone in the hall other than the candidates and the moderator must wear a face mask, all of which came after they were advised to make changes by their medical advisers at the Cleveland Clinic.

Short said the Pence team doesn't have a problem if Harris would like a plexiglass shield to protect her from the virus at the debate. But the Pence team believes it's not necessary for the vice president to have plexiglass as well.

A Pence aide also told CNN that Harris and the moderators "can do whatever they want," but the vice president's team does not feel like they have to follow along.

The health decisions made for the vice presidential debate on Wednesday will certainly hang over the two future presidential debates -- one in Miami on October 15 and another in Nashville on October 22. Trump has said that he plans to show up for the forthcoming debates despite his positive coronavirus diagnosis, leading debate organizers to consider a host of contingencies for how to host each debate safely. One possible option is to hold the debates virtually.

"The Commission, including me, is certainly open to virtual operations of the debates, without question," said a commission member, who asked for anonymity to speak openly about forthcoming deliberations.

The debate commission, which organizes the debates and works with the campaigns, said Monday night that "plexiglass will be used as part of the CPD's overall approach to health and safety," confirming earlier CNN reporting that plexiglass barriers would be erected to separate Pence, Harris and the moderator.

The setup for the Wednesday debate -- the one and only contest between Harris and Pence -- has been in flux ever since the President, first lady Melania Trump and multiple White House aides tested positive for coronavirus.

Despite a number of positive coronavirus tests at the White House and that Pence attended a Rose Garden event over a week ago that is widely seen as the genesis for the spread among several Trump aides and allies, the vice president has continued to test negative and the debate is moving ahead as planned.

Jesse Schonau, Pence's physician, said in a memo released Tuesday that the vice president does not need to quarantine because he was not a "close contact" with anyone who has tested positive for Covid-19 as defined by the US Centers for Disease Control and Prevention. Pence has had multiple coronavirus tests that have resulted negative.

Even still, medical experts believe it is risky to hold the vice presidential debate in person at all.

"If he has had close contact, this shouldn't be going ahead," said Erin Bromage, associate professor of biology at University of Massachusetts Dartmouth, noting that Pence pushing ahead with the debate would mean he was putting not only Harris at risk, but his staff, Secret Service detail and everyone at the debate.

"I would hope that the people organizing this debate are not only focused on distance but also the quality of the air environment to ensure that it is safe from a transmission point of view," he said. "When you are in a smaller hall, then you are really relying on the ventilation and filtration of the space to ensure that what is being breathed out by an infected person be stripped out of that environment."