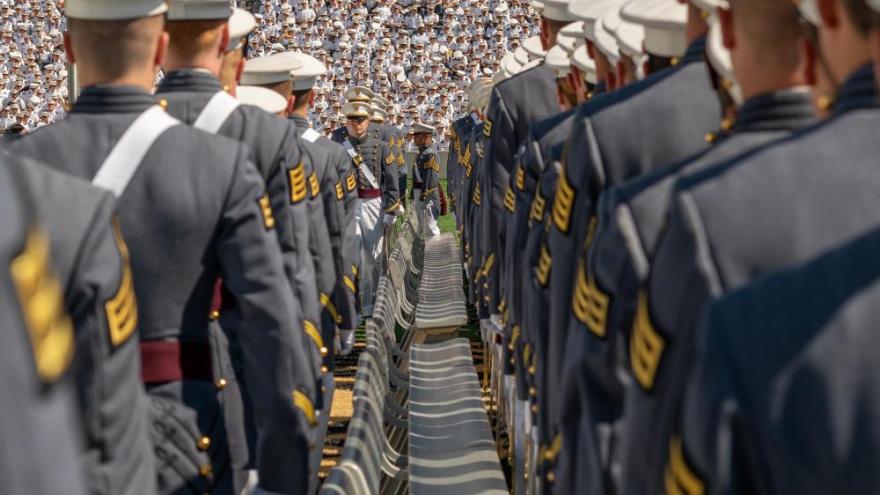 The commission established to recommend how to rename up to nine active-duty military bases will make its first site visit next week to the US Military Academy at West Point in New York, pictured here on May 25, 2019.

(CNN) -- The Congressionally mandated commission established to recommend how to rename up to nine active-duty military bases and sites associated with the Confederacy will make its first site visit next week to the US Military Academy at West Point in New York.

The visit was announced by retired Navy Adm. Admiral Michelle Howard who chairs the eight-member commission which was established by Congress in the face of fierce opposition from former President Donald Trump last year.

It is tasked with looking at installations, facilities, monuments, displays and even roads that were named after figures who served with Confederate forces during the Civil War. The review will lead the commission to look at some of the most iconic locations in US military history including Fort Bragg, Fort Hood and Fort Benning.

The visit to West Point underscores the military's struggle to reconcile its current bases with the history of the Civil War. Writing in The Atlantic in June 2020, retired Gen. David Petraeus noted, "it gives me considerable pause, for example, to note that my alma mater, West Point, honors Robert E. Lee with a gate, a road, an entire housing area, and a barracks, the last of which was built during the 1960s. A portrait of Lee with an enslaved person adorns a wall of the cadet library, the counterpoint to a portrait of Grant, his Civil War nemesis, on a nearby wall."

Howard noted that the review could "take some time" as it will potentially involve hundreds of locations and items. The commission is expected to produce a report by October 2022 that will potentially suggest some new names, as well as assess the cost of renaming or removing names, symbols, displays or monuments that commemorate anyone who voluntarily served with the confederacy.

The Secretary of Defense will have the final say in the renaming of bases. The commission recommendations are to include assessments of how local communities may be impacted by any changes.

While Army facilities may be the most prominent being considered, the Navy's USS Antietam guided missile cruiser could be renamed if the commission determines that it was named to commemorate the confederacy, though many consider the battle a Union victory.