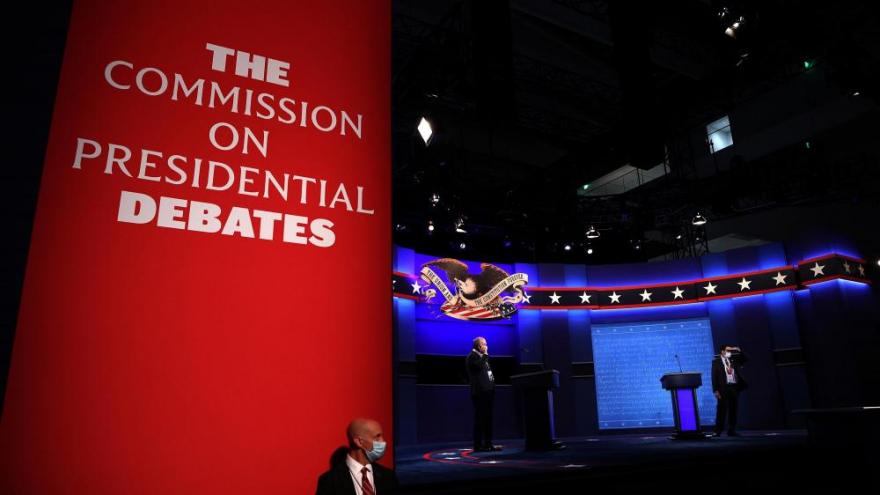 The Commission on Presidential Debates said it would be making changes to the format of the remaining presidential debates after the first debate between Democratic nominee Joe Biden and President Donald Trump devolved into a chaotic disaster.

(CNN) -- The Commission on Presidential Debates said Wednesday it would be making changes to the format of the remaining presidential debates after the first debate between Democratic nominee Joe Biden and President Donald Trump devolved into a chaotic disaster the night before.

"The Commission on Presidential Debates sponsors televised debates for the benefit of the American electorate. Last night's debate made clear that additional structure should be added to the format of the remaining debates to ensure a more orderly discussion of the issues," a statement from the CPD reads.

The CPD did not specify what changes were being considered or would be adopted, but said it would be "carefully considering the changes that it will adopt and will announce those measures shortly."

During the contentious 90-minute debate, Trump frequently interrupted and heckled Biden, ignoring repeated pleas from the debate moderator, Chris Wallace of Fox News, for Trump to stick to his allotted time. The debate was marked by frequent incoherent cross talk, and at one point, an exasperated Biden told the President, "Will you shut up, man?"

The CPD said it was "grateful to Chris Wallace for the professionalism and skill he brought to last night's debate," and said that it "intends to ensure that additional tools to maintain order are in place for the remaining debates."

Biden said Wednesday he hopes the CPD will find a way to control the amount of interruptions at future debates, and said the way Trump conducted himself at the debate was a "national embarrassment."

"I just hope there's a way in which the debate commission can control the ability of us to answer the questions without interruptions," Biden told CNN's Arlette Saenz. "I'm not going to speculate on what happens in the second or third debate -- my hope is that they're able to literally -- say the question gets asked of Trump, he has a microphone, he has two minutes, no one else has the microphone, and then I don't know what the rules are going to be. That seems to me to make some sense."

Biden's deputy campaign manager, Kate Bedingfield, told reporters Tuesday night that Biden plans to participate in the remaining presidential debates. The next time the nominees are scheduled to face off is on October 15 in Miami. Steve Scully of C-SPAN Networks will moderate, and the debate will take the form of a town hall where the questions will be posed by citizens from the South Florida area.

"Joe Biden's going to show up," Bedingfield told reporters. "He's going to continue speaking directly to the American people. The next debate is a town hall format where real voters are going to have the chance to engage the candidate. Biden obviously relishes any opportunity to talk directly to real voters, that's something that he prioritizes doing on the campaign trail."

Bedingfield said there will be "ongoing discussions" with the CPD about the "formats and rules" of the debates, but did not specify which changes were being considered.

Trump campaign communications director Tim Murtaugh told CNN in a statement that the CPD "shouldn't be moving the goalposts and changing the rules in the middle of the game."

"They're only doing this because their guy got pummeled last night," Murtaugh said. "President Trump was the dominant force and now Joe Biden is trying to work the refs."