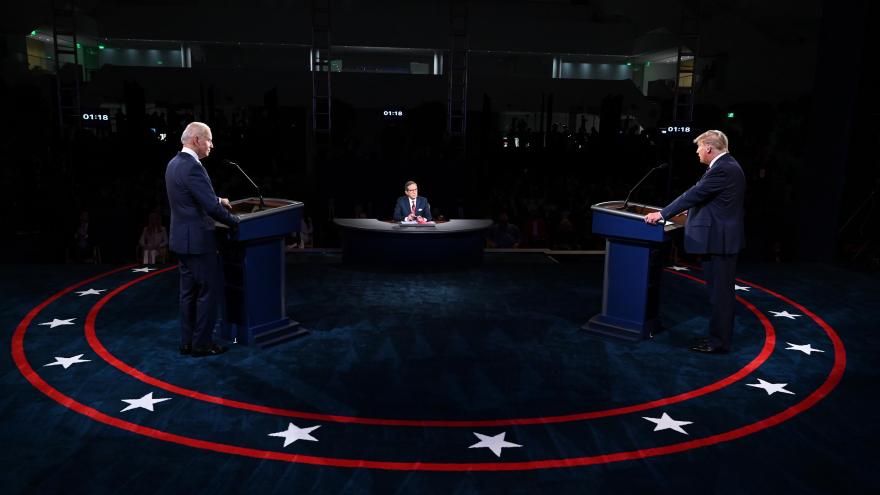 The Commission on Presidential Debates on Friday canceled the second debate between Donald Trump and Joe Biden after the President declined to do a virtual debate despite concerns over his Covid-19 diagnosis, a source familiar with the plans told CNN.

(CNN) -- The Commission on Presidential Debates on Friday canceled the second debate between Donald Trump and Joe Biden after the President declined to do a virtual debate despite concerns over his Covid-19 diagnosis, organizers said.

The cancellation is the culmination of a furious 48-hour back-and-forth between the commission and both campaigns and means what would have been the third debate in Nashville on October 22 will likely be the final meeting between the two candidates. The Wall Street Journal was first to report on the commission's decision.

"It is now apparent there will be no debate on October 15, and the CPD will turn its attention to preparations for the final presidential debate scheduled for October 22," the commission said in a statement.

The commission, with the backing of their health advisers, announced on Thursday morning that -- because Trump tested positive for the coronavirus -- the debate that was scheduled for Miami would be held virtually, with the two candidates appearing from remote locations. Trump swiftly rejected that plan, saying he would not show up and setting off a series of events that put the future of all general election debates into question.

"Vice President Biden looks forward to making his case to the American people about how to overcome this pandemic, restore American leadership and our alliances in the world, and bring the American people together," Biden campaign spokesman Andrew Bates said Friday in a statement. "It's shameful that Donald Trump ducked the only debate in which the voters get to ask the questions -- but it's no surprise."

The Trump campaign, in response to their candidate backing out of the debate, issued three statements on Thursday that slammed the commission, pushed the Biden campaign to agree to an in-person debate and said they would be willing to push the October 15 debate back a week to October 22 and then move the third debate to October 29, just days before the November 3 election.

The Trump campaign has argued that because the President's physician, Navy Cmdr. Dr. Sean Conley, has cleared him for travel, the commission should move the debate to an in-person setting. Trump is now in talks to do a town hall with NBC on Thursday in lieu of the debate, according to a person familiar with the plans, but that source cautioned things have not been finalized yet.

If that event comes to fruition, both candidates would be participating in town halls in separate events instead of the debate, which was scheduled to be a town hall-style format.

"There is no medical reason to stop the October 15 debate in Miami from proceeding as scheduled, since the President will be healthy and ready to debate," Trump's campaign spokesman, Tim Murtaugh, said in a statement on Friday. "There is also no reason there shouldn't be the three total presidential debates as Joe Biden had originally agreed. We have suggested using October 22 and October 29 to hold the final two debates. It's time for the biased commission to stop protecting Biden and preventing voters from hearing from the two candidates for president."

He added that Trump would be willing to debate Biden without the commission's involvement.

The cancellation is a political loss for Trump, who is down in all national polls and either behind or tied with Biden in key swing states. The loss of a debate deprives the President of a platform that he needs at a time when his campaign is trailing. The first debate between Trump and Biden, a chaotic affair, was watched by more than 73 million people.

The reality for the commission, however, is that once Trump backed out and Biden agreed to an ABC town hall, a second debate between the candidates was unlikely, according to multiple sources familiar with the negotiations.

And commission head Frank Fahrenkopf told CNN on Thursday night that Trump campaign's push to hold an in-person debate next week in Miami after the President had already backed out of the contest did little to change the Commission on Presidential Debate's belief that any debate next week must be virtual.

"The Cleveland Clinic would have to clear it," Fahrenkopf said. But, he added, that does not get the Biden campaign back involved, something the head of the commission believed was unlikely to happen after conversations with top Biden aides.

"They've moved on and are going to do this thing with ABC," Fahrenkopf added. "It doesn't look good unless the Biden campaign changes their mind."

Negotiations between the campaigns and the commission earlier on Friday did nothing to change the fact that the likelihood of a Miami debate was low.

"It is fair to say it is looking like Miami will be cancelled," a source familiar with today's negotiations told CNN. "I don't think there is any movement on either side that will make Miami happen."

This story has been updated with reaction to the announcement on Friday evening.