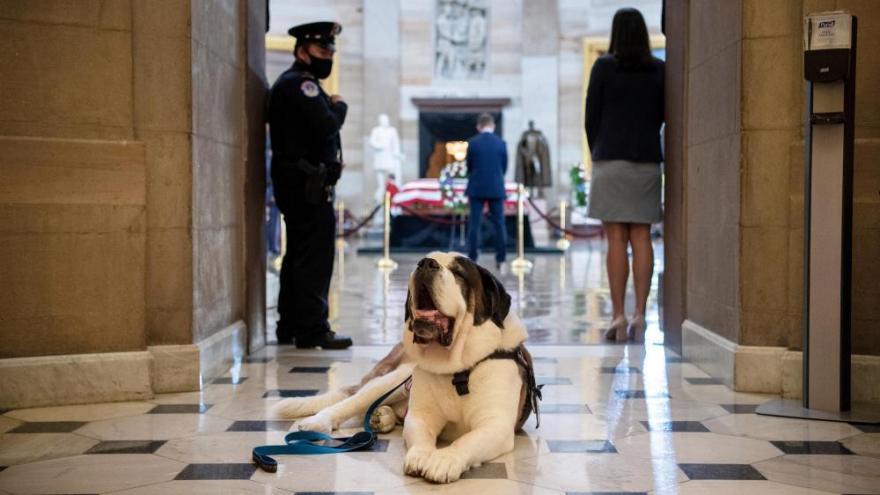 Officer Clarence from Greenfield, Massachusetts is the first Official Police Comfort Dog, and spent the week roaming the halls of Congress.

(CNN) -- Lawmakers, staff, law enforcement and journalists on Capitol Hill found one thing they could all agree on this week: Clarence is a very good boy.

"He's a national icon and a *very* good boy," Democrat Rep. Cindy Axne of Iowa posted on Twitter, complete with a selfie.

The Greenfield, Massachusetts, Police Department pup is the first Official Police Comfort Dog, and spent the week roaming the halls of Congress with Keeva, an Akita, and chocolate lab Hank, capturing the hearts of even the most stoic folks on the Hill.

But it was Clarence -- who clocks in at a massive 160 pounds of big, fluffy St. Bernard heft who caught a lot of the love.

"That's a big dog," said Sen. John Cornyn, a Texas Republican, standing next to Clarence as he rested in the Capitol. "Am I right?"

The light-hearted moments surrounding Clarence's interaction with lawmakers, staff and journalists, comes after a tumultuous time on Capitol Hill that has been hit by tragedy this year. Nearly 100 days after the Capitol Police suffered the loss of two officers in the wake of the January 6 riot, and a third two weeks ago when a car rammed into the barricades, the trio of dogs came to comfort officers as they bid farewell to Officer Billy Evans.

Officer Clarence, and his handler Lt. William Gordon, have been at the site of some of the country's worst tragedies -- Sandy Hook, the Las Vegas shootings, the Boston Marathon and the Tree of Life Synagogue shooting in Pittsburgh. And while his primary job is to tend to law enforcement officers, Gordon says there is plenty of Clarence to go around to help comfort everyone who is affected by traumatic events.

"Officer Clarence and the other police comfort dogs brought much-needed joy to the Capitol this week as we mourned the loss of another heroic USCP officer," Rep. Mary Gay Scanlon told CNN. "You couldn't see everyone's smiles hidden behind our masks, but you could certainly feel them!"

The 11-year-old bear of a dog drew fans from both chambers.

Scanlon and fellow Pennsylvania Rep. Madeleine Dean posed for a photo with the trio, with Dean calling them part of their "late night Paw-licy Committee meeting" and that they had "so much pooch-tential."

"I keep running into this guy in the Capitol. Clarence the police comfort dog is just the best," Rep. Andy Kim, a New Jersey Democrat, wrote on Twitter, with a pic of Clarence sprawled out on the Rotunda floor. "I think we should get one permanently here at the Capitol."

Journalists -- including some from CNN -- got in on the attention as well, filling social media with pictures and information about the massive pup, including his work in commercials, TV shows, and for modeling agencies, and Gordon handed out Clarence baseball cards highlighting Clarence's work and community service awards.

"My wife watches on social media and kept seeing people say that Clarence was fourteen years old," he said. "And she called me and said, 'hey, he's only 11.' So he will still be doing this for a while."