Attorney says Casey Goodson Jr. pointed a gun at the deputy who fatally shot him 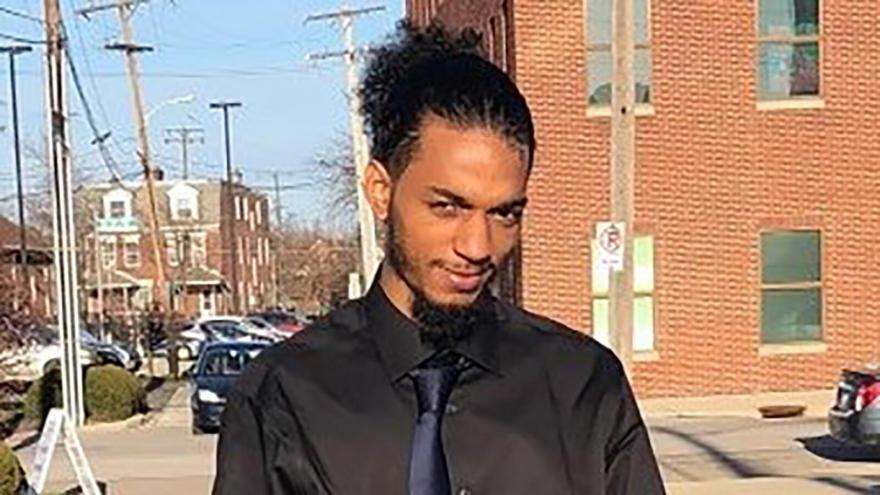 The family of a Black man, Casey Christopher Goodson, Jr., who was killed during a manhunt for another person, wants answers after state investigators decline the case.

(CNN) -- An attorney for the Ohio deputy who fatally shot Casey Goodson Jr. says the young Black man pointed a gun at his client -- an allegation that was swiftly challenged by lawyers for Goodson's family.

The 23-year-old was shot one week ago by Franklin County Sheriff's Office deputy Jason Meade as he was trying to enter his home with a sandwich from Subway. Goodson, an Ohio concealed carry permit holder, was legally armed at the time, police said. He was not alleged to have committed any crimes, had no criminal background and was not the target of any investigation, family attorney Sean Walton told CNN.

In the first public statement made on Meade's behalf, attorney Mark Collins said that Goodson pointed a gun at the deputy and ignored verbal orders to drop it.

"At no time did Deputy Meade mistake a sandwich for a gun," Collins said. "Mr. Goodson pointed his gun at Deputy Meade. There has been confirmation that our client gave verbal commands for Mr. Goodson to drop the gun."

Collins noted there are no known eyewitnesses to the shooting. In a news release on Wednesday, the Columbus Division of Police said there were "reports of a verbal exchange" between the deputy and Goodson.

Attorneys for Goodson's family condemned the statement, saying in their own release that "neither the City of Columbus nor any other investigatory agency has alleged that Casey Goodson pointed a gun before Meade pulled the trigger."

"With Meade's statement issued nearly one full week after he killed Casey, it is critical to note that this is a classic defense often claimed by police after they shoot and kill someone," they said. "It is also critical to remember that often the evidence does not support these claims."

Goodson's death has sparked demands from both his family and the community for answers. The Columbus Division of Police is handling the investigation into the shooting and the US Attorney's Office in Southern Ohio has opened a civil rights investigation.

"We hear your cries for more information and more answers. We hear your demands for justice," Quinlan said in a Thursday statement. "The difficult reality is, very often in police work, information and answers are necessarily, unavoidably slow to come."

In his statement, the chief said he understood the "painful history evoked" by Goodson's death. The shooting is the latest in a series in recent years involving young Black men and teens in the city. It also comes just months after Columbus protests that took place following the death of George Floyd, during which protesters clashed with police, who fired rubber bullets and pepper spray.

Rallies are scheduled to take place in the coming days, this time calling for justice for Goodson.

The moments after the shooting

At the time of the shooting, Meade was working for the US Marshal's fugitive task force looking for violent offenders, but Goodson was not the person being sought by the task force, Columbus police said.

US Marshal for the Southern District of Ohio Peter Tobin previously told reporters the fugitive task force was wrapping up an unrelated investigation when a deputy saw a man "driving down the street waving a gun." The man was confronted by the deputy before the man "allegedly started to pull a gun and the officer fired," Tobin said.

Police have only provided vague details about what happened prior to Goodson's death. But accounts from his family have offered glimpses into the aftermath.

Goodson's grandmother told a 911 dispatcher she heard gunfire and found her grandson lying in a doorway, according to the recording obtained by CNN from the Columbus Division of Police. Cries could be heard in the background.

"He went to the dentist or somewhere and came home," Sharon Payne, Goodson's grandmother, told the operator. "All I know is there's a bunch of gunfire. He's not a bad kid. He doesn't have a police record. He works. I don't know what happened."

Goodson had put his keys into his door before he was shot and fell into the kitchen, where his 5-year-old brother and grandmother saw him lying on the ground with a Subway sandwich, Walton told CNN.

Tamala Payne, Goodson's mother, said during a Thursday news conference she rushed to the scene after the shooting and wasn't allowed to embrace her young children who at the time were barefoot and crying. She said there were about nine family members inside the home at the time of the shooting, including four children.

When her son's body was placed on a stretcher, Payne said, "we knew that his eyes (were) open, but we didn't know if he was dead or alive."

The Franklin County Coroner's office said Goodson's manner of death was a homicide.

An autopsy performed Tuesday found the preliminary cause of death to be "multiple gunshot wounds to the torso," but the coroner's office statement didn't specify where on the torso the wounds are located.

The full report will be released in 12 to 14 weeks, the office said.

Deputy was cleared in a previous shooting during raid

Meade, the sheriff's deputy who shot Goodson, is a 17-year veteran of the Franklin County Sheriff's Office.

Previously, Meade was cleared of wrongdoing in a 2018 shooting during a felony drug raid that ended with the suspect killing a housemate and himself.

Meade was one of seven deputies from the Franklin County SWAT team who fired their guns during that 2018 raid. A letter in his personnel file shows he was placed on administrative leave because of his involvement in a critical incident.

A grand jury that reviewed the 2018 shooting, in Pike County, found no basis for criminal charges. Franklin County hasn't yet released their records of the shooting, but the Pike County prosecuting attorney confirmed to CNN Meade's involvement in the 2018 raid.

The responding officers, she added, "brought with them their bias against Casey, and in favor of Meade."