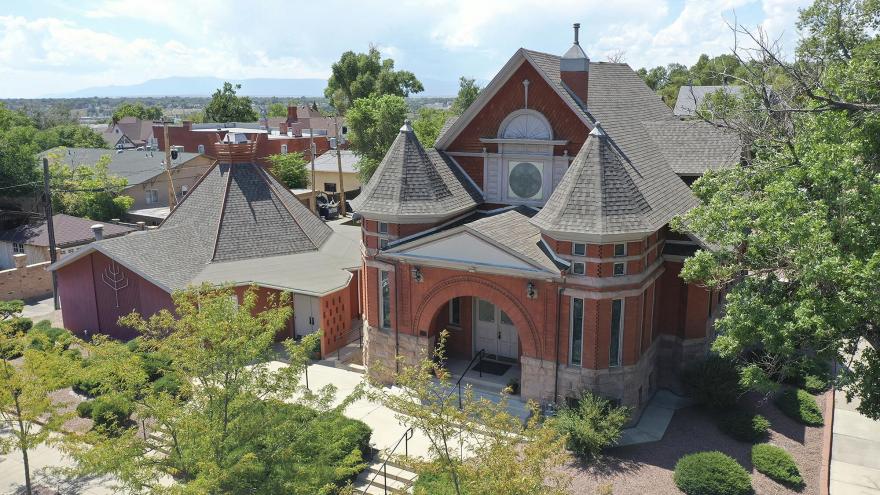 Temple Emanuel Synagogue in Pueblo, Colorado, is pictured in August 2019.

(CNN) -- A Colorado man was sentenced to more than 19 years in prison on Friday for plotting to blow up the 119-year-old Temple Emanuel Synagogue in Pueblo, Colorado.

Richard Holzer -- who self-identifies as a neo-Nazi and White supremacist, according to the Justice Department -- pleaded guilty last October to federal hate crime and explosive charges for planning to blow up the historic synagogue, the second-oldest in the state.

The 28-year-old was arrested in November 2019 following an FBI investigation in which he told undercover agents he wanted to "get that place off the map," the Justice Department said in a news release Friday.

Judge Raymond P. Moore of the US District Court in Colorado sentenced Holzer to 235 months in federal prison on Friday, along with 15 years of supervised release.

Jason Dunn, the outgoing US attorney for the District of Colorado, said Holzer's sentence was "another step forward in our ongoing fight against extremism."

"About two-and-a-half years ago, my first day as U.S. Attorney took me to a vigil for victims from the Pittsburgh Tree of Life Synagogue attack," he said. "Today, my last day in the office, we have sentenced the extremist responsible for the attempted bombing of the Temple Emanuel Synagogue in Pueblo."

"We must remain ever vigilant in this battle and I am confident the Department will continue to lead this fight."

The FBI started investigating Holzer in late September 2019, a bureau official previously said, after receiving a tip about comments he made online.

According to the criminal complaint, Holzer talked about killing Jews in online forums and shared a video of himself casing a synagogue in Pueblo. He described himself as a skinhead, it said, and shared pictures of himself with other social media users with guns and knives alongside White supremacist symbols.

In one Facebook post, according to prosecutors, Holzer wrote, "I wish the Holocaust really did happen ... they need to die."

Undercover agents approached him online soon after the tip and interacted with him as he plotted the attack, authorities said. Per the complaint, in a meeting with three undercover agents, Holzer proposed using Molotov cocktails to destroy the synagogue, telling the agents, "I want something that tells them they are not welcome in this town."

Holzer was arrested after undercover agents provided Holzer with inert pipe bombs and 14 sticks of dynamite authorities said had been prepared with simulated black powder at the FBI explosive laboratory in Quantico, Virginia.

According to the Justice Department's statement, Holzer said he planned to detonate the explosives in the early morning hours of the next day.

"Mr. Holzer targeted a place of worship for violence and destruction to drive people of the Jewish faith from our community," FBI Denver Special Agent in Charge Michael Schneider said in Friday's statement.

"Today's sentence demonstrates the commitment by the FBI and our law enforcement partners to ensure that if a crime is motivated by bias against a religion or any other federally protected status, it will be aggressively investigated, and the perpetrators held responsible for their actions."