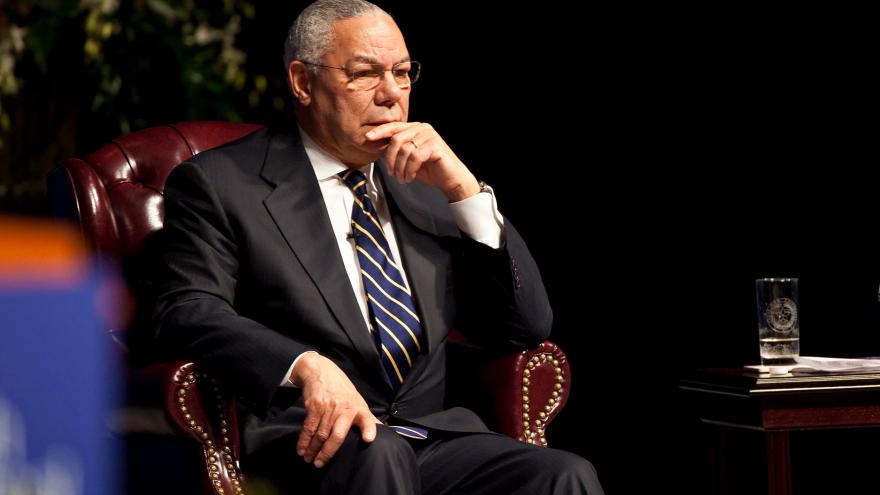 (CNN) -- Gen. Colin Powell, the late former secretary of state and Joint Chiefs of Staff chairman, will be honored Friday at a private funeral service at the Washington National Cathedral.

Powell died on October 18 from complications from Covid-19. He was 84.

Though he was fully vaccinated against Covid-19, Powell, who had multiple myeloma and Parkinson's, was immunocompromised, putting him at greater risk to the virus.

President Joe Biden, who recently returned from an international trip, and first lady Jill Biden plan to attend the funeral service, according to the White House.

Coronavirus safety measures will be followed to protect the health of the attendees, according to the cathedral, which has hosted the funerals of top Washington officials and public servants.

Considered a "favorite" of presidents, Powell served in several top roles in Republican administrations, most famously in the younger Bush's administration.

Powell was also national security adviser to former President Ronald Reagan and chairman of the Joint Chiefs of Staff for former President George H. W. Bush. He was the first African American man in US history to fill those roles.

He again broke barriers when President George W. Bush selected him to be the 65th secretary of state. When he was sworn-in in 2001, Powell became the first Black US secretary of state and the highest-ranking Black public official to date in the country, standing fourth in the presidential line of succession.

Powell's legacy would be defined by two US wars against Iraq. He was viewed as a hero in the 1991 Gulf War, overseeing Operations Desert Shield and Desert Storm.

His record, however, was marred by his 2003 speech before the United Nations, in which he pushed faulty US intelligence about weapons of mass destruction to advocate for the US to go to war with Iraq. Powell left public office in January 2005.

Despite spending majority of his public service career in Republican administrations, Powell would later support Democratic presidential candidates and told CNN after the January 6 attack at the US Capitol that he no longer considered himself a Republican.

He broke with his party to support Obama's 2008 campaign and endorsed him again in 2012. Powell voted for Hillary Clinton in 2016 over Trump, whom he called a "national disgrace and an international pariah," and supported Biden over Trump's bid for a second term in 2020.

Powell also had a storied military career, serving two tours of duty in South Vietnam in the 1960s.

He is survived by his wife, Alma Vivian (Johnson) Powell, whom he married in 1962, as well as three children.