Coke has a new flavor. It took inspiration from McDonald's 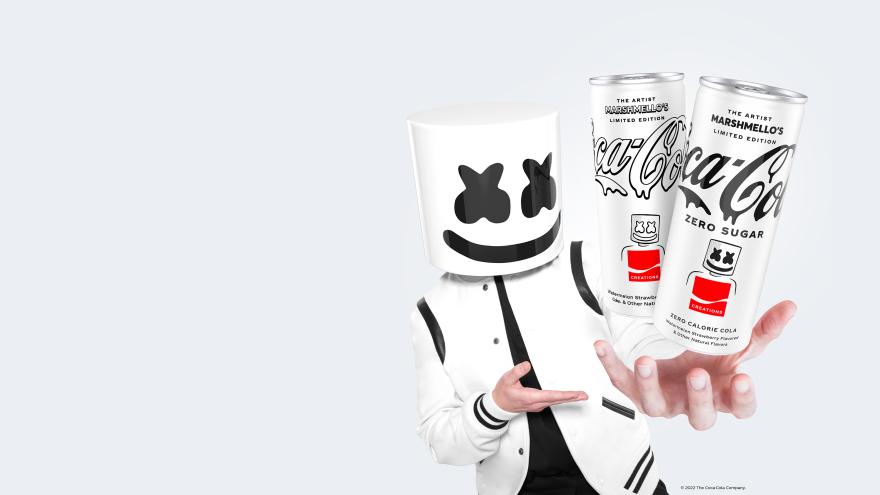 (CNN) -- Coca-Cola has another new flavor. This time, it got some help.

The latest product out of Coca-Cola Creations — Coke's innovation platform, which brought us starlight and pixel-flavored sodas — is a collaboration with Marshmello, a masked DJ and electronic music producer.

If you think the artist worked with Coke to develop a marshmallow-flavored beverage, you're wrong. Instead, the new flavor has notes of strawberry and watermelon, Marshmello's favorites.

"For our third Coca-Cola Creations drop, we sought to add an unexpected remix of flavors to a great Coca-Cola taste," said Oana Vlad, senior director of global strategy at the company, in a statement announcing the collaboration Wednesday.

"We created a vibey blend of my favorite flavors in this all-new mix," Marshmello said in a statement. "I think it tastes amazing and I hope fans love it too."

The new flavor, which also comes in a zero-sugar variety, will be available for purchase starting on July 11 in the United States for a limited time. It will be offered in other countries later this summer.

It's vital for Coca-Cola, which has discontinued beloved but outdated drinks like Tab, Odwalla and Honest Tea, to get young consumers excited about its core product, Coke. Coca-Cola Creations, which launches digital experiences along with the limited-edition flavors, is designed to help do that.

So far, the flavors have been ... abstract.

Starlight was "inspired by space," the company said in February, describing it as having "notes reminiscent of stargazing around a campfire, as well as a cooling sensation that evokes the feeling of a cold journey to space."

Byte, the second flavor, "makes the intangible taste of the pixel tangible," said Vlad when it launched in April.

Compared to space and pixels, strawberry and watermelon are perfectly mundane. And the idea of partnering with artists on products featuring their favorite flavors is not new, at least in the fast food world.

McDonald's has had success with its celebrity meals, versions of artists' preferred orders that are available for a limited time. The burger chain has teamed up with Travis Scott, BTS and Saweetie, among others. Burger King has followed with its own celebrity deals.

For Coca-Cola, this is the first time a beverage has been created with an artist, the company said.

The new flavor is getting the full Coca-Cola Creations digital treatment.

On July 9, ahead of the launch, it will appear on Marshmello's Twitch channel. And starting July 25, those who have gotten their hands on a can will be able to scan a QR code on the packaging to reach Coca-Cola Creation's site. There, "AI technology will transform their emotions while listening to Marshmello's latest track into a personalized piece of digital art," according to the company.

For Starlight, there was a holographic concert by Ava Max. And Byte was introduced to consumers in Fortnite, a nod to the importance of gamers to food and beverage companies.