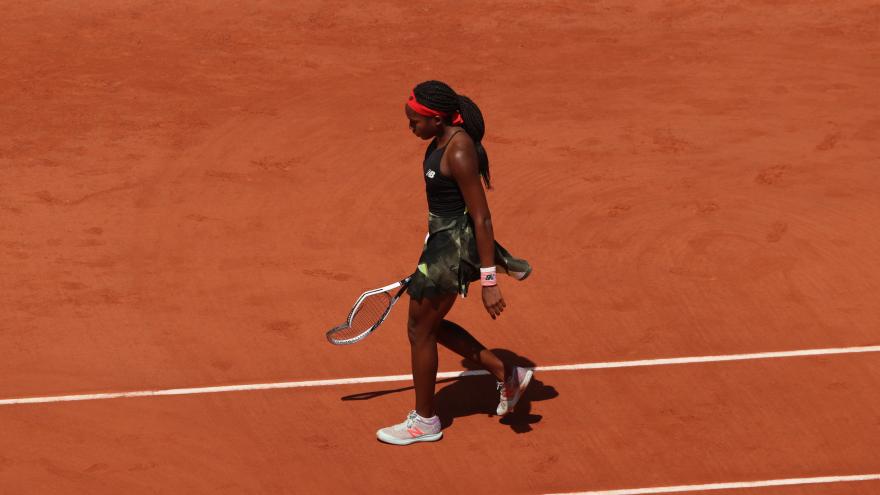 The 17-year-old was playing in her first grand slam quarterfinal, but trailing 4-0 in the second set, a frustrated Gauff smashed her racquet on the clay court after she double faulted.

Gauff ran her opponent close in the opening set, with Krejcikova needing a dramatic tiebreak to gain the upper hand in the match.

In the second set, the Czech player ramped up the pressure on her younger opponent, winning the first five games without reply.

"I never imagined I would be standing here one day," the 25-year-old Krejcikova said on court after her victory.

"Already for me this is something I have never dreamed of. I was really playing a great match and Coco is incredible -- she is 17, it's amazing."

Despite her age, the 17-year-old Gauff didn't look out of place on the big stage on Court Philippe Chatrier.

The No. 24 seed held 3-0 and 5-3 leads in the opening set, but Krejcikova fought back, saving five match points before eventually taking the 72-minute set.

Gauff pinpointed losing the first set as the turning point in the match.

"I'm obviously disappointed that I wasn't able to close out the first set," she told the media after. "To be honest, it's in the past, it already happened. After the match, my hitting partner told me this match will probably make me a champion in the future. I really do believe that."

That really seemed to kick the world No. 33 into gear.

She looked much more comfortable in the second set, manipulating the ball at will, with Gauff struggling to gain any momentum.

And leading 5-0 in the second set and needing just one more game to reach her first singles grand slam semifinal, that looked like a formality for Krejcikova with Gauff appearing rattled.

However, Gauff showed remarkable strength and resilience to save multiple match points to win three straight games and suggest a previously unthinkable recovery might just be possible.

But it was not to be and on Krejcikova's sixth match point the Czech player clinched the match after one hour and 50 minutes.

Krejcikova believes some of her singles success is down to a change in perspective during the Covid-19 shutdown.

"Seeing that there are also other things in the world that actually are happening," she said. "[That] are tougher and more difficult than just me playing tennis and losing.

"It just got to my mind. I'm like, Well, I go and I play tennis and I lose, but there are actually people that are losing their lives. I just felt more like, Well, just relax because you are healthy. Just appreciate this and just enjoy the game. You can do something what maybe other people would like to do as well but they cannot."

Krejcikova will face defending champion Iga Swiatek or Greece's Maria Sakkari for a place in the final at Roland Garros.