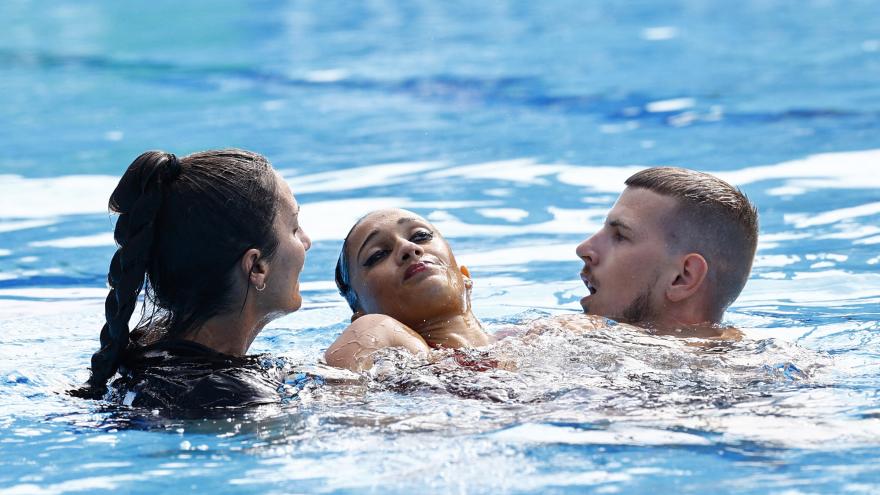 (CNN) -- American swimmer Anita Alvarez was rescued from the bottom of the pool by her coach at the FINA World Aquatic Championships in Budapest, Hungary, after she lost consciousness.

Coach Andrea Fuentes jumped into the pool after she saw the 25-year-old artistic swimmer sink to the bottom at the end of her routine in the women's solo free event on Wednesday.

Fuentes, a four-time Olympic medalist in synchronized swimming, lifted Alvarez to the surface before helping bring her to the edge of the pool.

Alvarez, who competed at the 2016 and 2020 Olympics, received medical attention beside the pool and was subsequently carried off in a stretcher.

It was the second time Fuentes has had to rescue Alvarez. She leapt into the pool during an Olympic qualification event last year and pulled her to safety, along with the American's swim partner, Lindi Schroeder.

Speaking to Spanish broadcaster Cadena COPE in a radio interview, Fuentes said the lifeguards didn't react quickly enough on Wednesday, which is why she jumped in.

She said: "When a swimmer finishes their routine, the first thing they want to do is breathe and so I saw that instead of going up, she was going down and I told myself, 'Something is going on,' and I called for the lifeguards, like, 'Go into the pool, can't you see she's going down in the water?'

"And they weren't reacting, so after a couple of seconds, I went in as fast as I could.

"I don't think I've swum as fast ever before, even when I got Olympic medals and well, in the end, I was able to get her up and she wasn't breathing. ... In the end, everything came out OK."

The International Swimming Federation (FINA), the sport's governing body, did not immediately respond to CNN's request for a comment on the speed of the rescue.

But in a statement to CNN on Thursday, FINA said it had been in contact with Alvarez, her team and medical staff following what it described as a "medical emergency."

"Ms. Alvarez was immediately treated by a medical team in the venue and is in good health," the statement read.

In a statement on the US Artistic Swimming Instagram page, Fuentes said Alvarez would rest on Thursday and consult her doctor to see whether she would be fit to compete in the swim free team finals, which are scheduled to take place Friday, according to FINA.

"Anita is okay -- the doctors checked all vitals and everything is normal: heart rate, oxygen, sugar levels, blood pressure, etc ... all is okay," Fuentes said in the statement.

"We sometimes forget that this happens in other high-endurance sports. Marathon, cycling, cross country ... we all have seen images where some athletes don't make it to the finish line and others help them to get there," Fuentes added.

"Our sport is no different than others, just in a pool, we push through limits and sometimes we find them. Anita feels good now and the doctors also say she is okay."

Born in Kenmore, New York, Alvarez competed at the 2012 US Olympic trials when she was 14. Four years later, she made the team, finishing ninth in the duet at Rio 2016. She was 13th in the same event at Tokyo 2020.