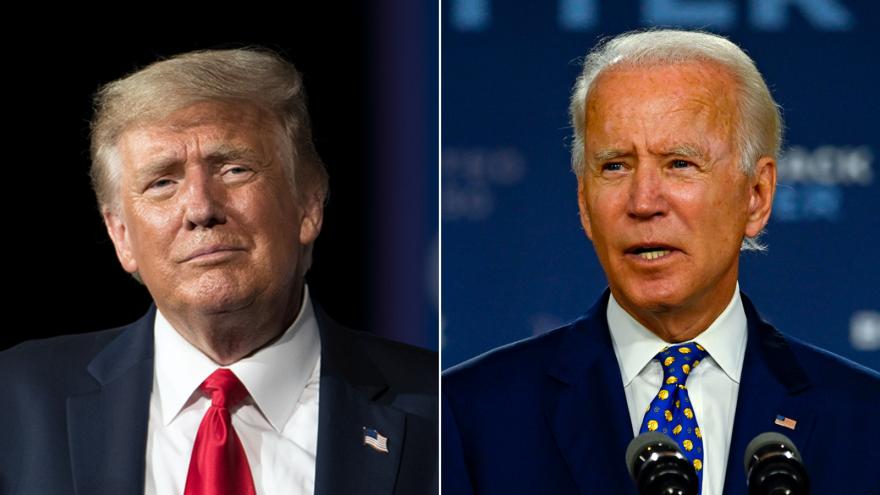 (CNN) -- The race for the presidency is near even in North Carolina and Democratic nominee Joe Biden holds a lead over President Donald Trump in Wisconsin, according to new CNN polls conducted by SSRS in the battleground states.

Among likely voters in North Carolina, 49% support Biden, 46% Trump. In Wisconsin, likely voters break 52% for Biden to 42% for Trump.

The results suggest North Carolina voters see some strength in each candidate. Likely voters there divide over which candidate would better handle the top issues in the campaign, with Trump holding an advantage on handling the economy (52% to 45% among likely voters) and Biden ahead on handling the coronavirus pandemic (52% to 46%) and racial inequality in the US (53% to 41%). They see Biden as more apt to unite the country (54% to 40%), and are more likely to say Trump has the stamina and sharpness to be president (50% to 44%). They split evenly (47% to 47%) over who has a clear plan to solve the country's problems and who would keep Americans safe from harm (49% Trump to 48% Biden).

In Wisconsin, on the other hand, Biden has an edge over Trump on all but two of those tested matchups, and on those where Biden does not have an edge, neither does Trump. Biden is widely viewed as more apt to unite the country (55% to 36%) and handle racial inequality in the US (55% to 38%). He is more trusted by a 13-point margin on the coronavirus outbreak (54% to 41%). He is more often seen as having a clear plan to solve the country's problems (49% to 43%) and has the edge on keeping Americans safe from harm (50% to 45%). Wisconsin likely voters split evenly on who would better handle the economy (49% Trump to 48% Biden) and who has the stamina and sharpness to be president (47% Trump to 44% Biden).

The polls were conducted entirely after the release of excepts from Bob Woodward's latest book on Trump, as well as the release of tapes Woodward recorded of the President admitting early on in the pandemic that Covid-19 was more deadly than he was letting on publicly.

Biden's showing in Wisconsin is slightly stronger than other recent polls there have found. He fares better in this poll than he has in other recent Wisconsin results among women, older voters and independents. Women and seniors are more likely than others in the poll to express deep concern about the coronavirus outbreak (42% extremely worried among women vs. 25% among men; 43% extremely worried among those age 65 or older vs. 30% among those age 64 or younger).

The survey also finds Biden receiving higher approval ratings than either Trump or Wisconsin Gov. Tony Evers, a Democrat, for their response to the shooting of Jacob Blake in Kenosha. Among likely voters, 48% approve of Biden's response to events in Kenosha, 42% disapprove. For Trump, 42% approve and 54% disapprove, while Evers earns a 42% approve to 47% disapprove rating. There's a racial divide in approval for Trump and Biden on their response to Kenosha. Among Whites in the state, 43% approve of Trump's response, 44% of Biden's. People of color, however, give Biden far higher approval numbers (50%) than they do Trump (16%).

Biden trails Trump in a group of seven suburban counties surrounding Milwaukee, a group that includes Kenosha; still, he is behind by a far smaller margin than Hillary Clinton's 20-point loss there in 2016 (42% in those counties back Biden, 53% Trump, compared with a 57%-Trump-to-37%-Clinton margin in 2016).

Veterans make up a sizable share of North Carolina's voter base, and here, they favor Trump, 57% to 40%. Trump's support is about on par with his 2016 standing among veteran voters in the state per exit polls (59%), but Biden fares a bit better than Clinton's 33% showing among the group.

Overall, Trump's approval ratings in the two states break negative. Among all adults, 51% disapprove and 43% approve in North Carolina; it's 55% disapprove to 40% approve in Wisconsin.

The North Carolina US Senate race is a toss-up in the poll, with 47% of likely voters saying they back the Democrat Cal Cunningham and 46% for incumbent Republican Thom Tillis. Gov. Roy Cooper, a Democrat, has a lead in his bid for reelection, 53% support him, 44% his Republican challenger Dan Forest.

A majority of Wisconsin likely voters (53%) say they plan to cast their ballots in-person on Election Day, while 27% say they want to vote by mail and 19% by using an in-person absentee ballot. North Carolina's likely voters, however, are far more likely to plan to vote early or absentee, with just 38% saying they aim to vote on Election Day. A plurality, 42%, say they will vote early in-person, and 18% say they aim to vote by mail.