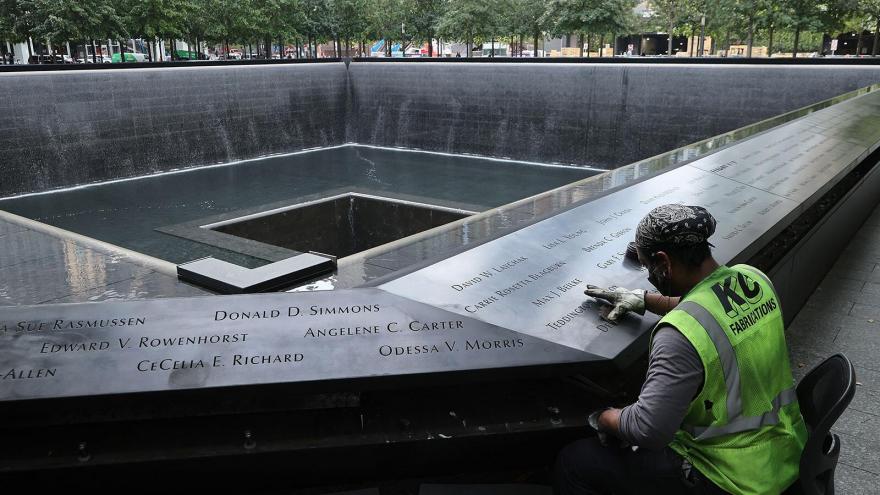 Polishing work is done on the bronze parapets surrounding the twin Memorial pools. A new CNN Poll finds that 57% of Americans say the attacks impacted the way they live their life today.

(CNN) -- Twenty years after 9/11, the changes the attacks brought to American life still reverberate across political and demographic lines. A new CNN Poll conducted by SSRS finds that 57% of Americans say the attacks impacted the way they live their life today and 68% say the attacks had an impact on Americans' individual rights and freedoms.

Five years after the attacks, in 2006, an AP-Ipsos survey found a 50-50 split over whether 9/11 affected the way Americans live their lives. By 2011, 57% said their lives had been impacted by the attacks in an AP-NORC poll, and 63% felt that way two years later.

About half of Americans in the new poll (51%) say they rarely or never think about what happened on September 11. At the 10-year anniversary of the attacks, that figure stood at 35%.

The frequency with which Americans think about the attacks is connected to their age in 2001. Those who were older than college age (22 or older) then are more likely to say they think about 9/11 a few times a month or more often (55%) than are those who younger than that (40%). Among those who were 45 or older at the time of the attacks, 61% say they think of 9/11 a few times a month or more.