Clyburn says there is a 'possibility' infrastructure vote could be delayed 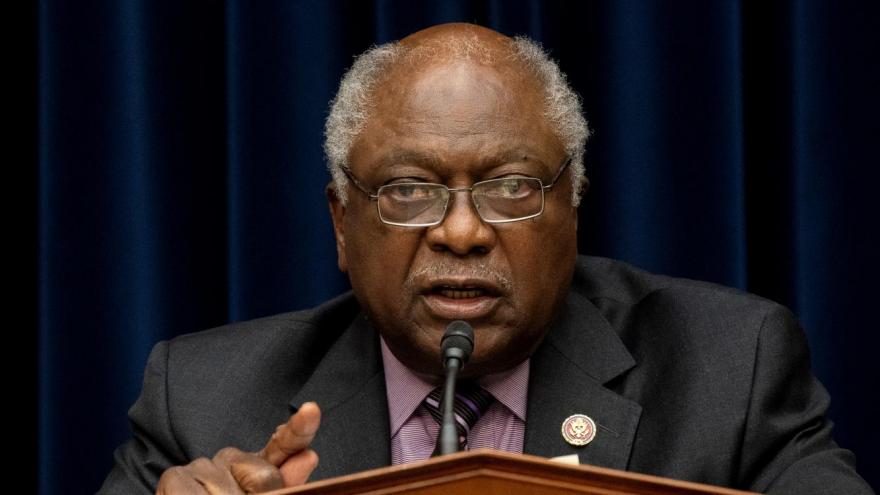 Representative James Clyburn speaks during a House Select Subcommittee on the Coronavirus Crisis hearing in the Rayburn House Office Building on Capitol Hill on May 19. Clyburn said that there is a "possibility" the vote on a bipartisan infrastructure package will be delayed.

(CNN) -- House Majority Whip Jim Clyburn said Sunday that there is a "possibility" the vote on a bipartisan infrastructure package will be delayed, despite Democratic House leaders promising moderate members a vote by September 27.

"There's always a possibility that the vote would get delayed, but the question is, 'Are we going to work to get to our goal for September 27?' Yes, we're going to work hard to reach that goal, and sometimes you have to kind of stop the clock to get to the goal. We'll do what's necessary to get there," Clyburn, the third-ranking House Democrat, told CNN's Jake Tapper on "State of the Union."

Top Democrats, however, have reassured House members that they are still committed to holding the vote on the 27th, sources with knowledge of the matter tell CNN.

Last month, the House voted on a rule that directed the chamber to take up the $1 trillion bipartisan bill by September 27. That move represented a win for moderates, who have been pushing to first vote on that bill before Democrats' sweeping economic spending package. That $3.5 trillion package, which President Joe Biden has made a signature agenda item, is designed to expand the social safety net -- and its price tag has drawn reservations from multiple Senate Democrats, potentially imperiling its passage in a narrowly divided Congress. It's a top priority for progressives, who have threatened to vote against the bipartisan bill until it gets a vote.

In order to satisfy her caucus, House Speaker Nancy Pelosi pledged early on not to move the bipartisan infrastructure bill until the House was finished with its bigger proposal, which Republicans say gave them opening to argue that the two bills, which are separate proposals, are inextricably linked. With just a three-vote margin, Pelosi has had to tread carefully to secure moderate and progressive votes on both packages and has promised moderates she will bring the bipartisan bill to the floor no later than September 27.

House Budget Committee Chair John Yarmuth on Sunday appeared optimistic that the vote would still occur by the September 27 deadline, saying Pelosi can hold off on sending it to President Joe Biden's desk for his signature if the larger spending package hasn't come up yet.

"The only answer I can give you is that is the current plan to vote on the infrastructure bill on September 27," Yarmuth said on Fox News Sunday when asked about the timing of advancing the two separate bills. But the Speaker "can hold on to that bill for a while," the Kentucky Democrat said, "so, there's some flexibility in terms of how we mesh the two mandates."

Yarmuth said the Democrats' massive economic bill would likely be voted on after September 27.

"I would say we're probably going to slip past the September 27 date. Sometime into early October would be my best guess," he said.