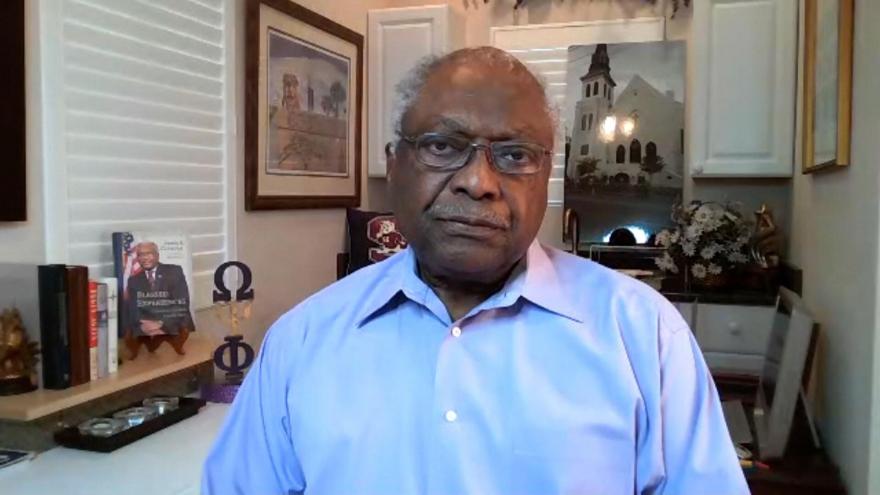 House Majority Whip James Clyburn on Sunday said Democrats should not delay new policing reform legislation even if a provision on ending civil lawsuit protections currently afforded to police officers is not included, arguing that the party can push to end qualified immunity at another time.

(CNN) -- House Majority Whip James Clyburn on Sunday said Democrats should not delay new policing reform legislation even if a provision on ending civil lawsuit protections currently afforded to police officers is not included, arguing that the party can push to end qualified immunity at another time.

"I would never sacrifice good on the altar of perfect. I just won't do that. I know what the perfect will would be. We have proposed that. I'm willing to see good legislation and I know that sometimes you have to compromise," the South Carolina Democrat told CNN's Jake Tapper on "State of The Union." "We got to root out the bad apples, and let's go forward with a good, solid program. If you don't get qualified immunity now, then we'll come back and try to get it later, but I don't want to see us throw out a good bill because we can't get a perfect bill."

The push from a top Democrat in Congress to move the bill forward marks a departure from progressives in his party who have said they will not advance the legislation if it includes compromises on qualified immunity. The measure, which protects police officers from civil lawsuits, has been a sticking point in bipartisan talks, though progress has been made.

South Carolina Republican Sen. Tim Scott, who is leading talks for Republicans in the Senate, has proposed shifting the responsibility to police departments as opposed to individual officers while Democrats have said both the officers and departments should be held accountable.

Democratic Rep. Cori Bush of Missouri, told CNN last month that she refuses to vote for policing reform legislation that compromises on ending civil lawsuit protection against police officers. And California Rep. Karen Bass, a Democrat, who authored the House bill and is another key player in the discussions with Scott and the Senate, has said officers and departments should both be held accountable.

As Republican-led state legislatures enact measures to restrict voter access, Congressional Democrats are trying to push through a sweeping election and voting rights package. It faces challenges in a narrowly divided Senate, where it's not clear there would be enough Republican support to overcome a filibuster. And West Virginia Sen. Joe Manchin has expressed support for expanding voting access but is one of several moderate Democrats reluctant to gut Senate filibuster rules, which require 60 votes to advance legislation.

Asked by Tapper if Democrats are considering shifting their approach to pass a more narrowly focused bill, Clyburn said the "national government must play a role in making sure that the elections are unfettered," adding that it's going to be tough.

"Joe Manchin who has some issues, we've met, and I understand we're meeting again this week," the Democrat said. "I hold out hope that nobody is going to allow the filibuster to take away voting rights or any other constitutional right. The vote filibuster is all about extending debate. It's not about denying civil and basic constitutional rights, and I don't think that's going to come to pass."