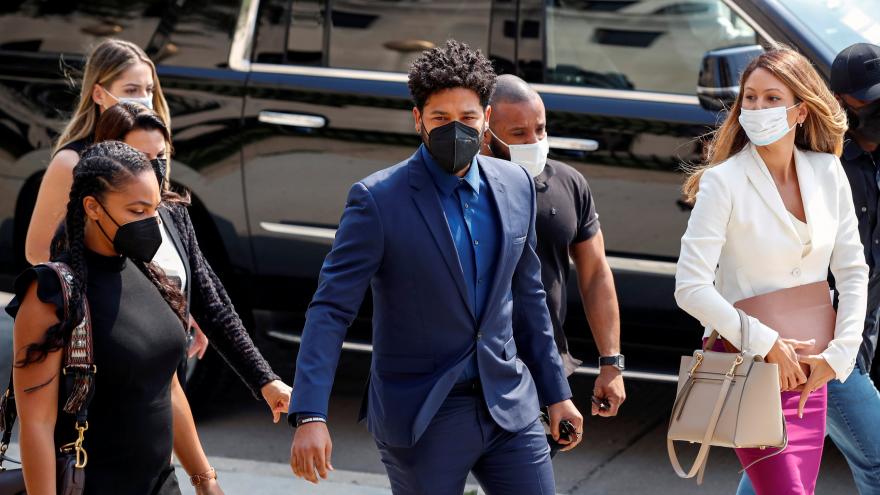 (CNN) -- Closing arguments are set to take place Wednesday in Jussie Smollett's trial, a day after the former "Empire" actor took the stand to rebut allegations that he staged a hoax hate crime and lied to police about it in January 2019.

Smollett, 39, has pleaded not guilty to six counts of disorderly conduct on suspicion of making false reports to police. The charge is punishable by up to three years in prison.

The criminal trial began last week as prosecutors told the jury that Smollett, who is Black and gay, directed two acquaintances -- the brothers Bola and Ola Osundairo -- to carry out a fake anti-gay and racist attack on a frigid night in Chicago near Smollett's apartment building.

Five police investigators and the Osundairo brothers testified for the prosecution last week. The brothers testified that Smollett directed them and paid them to stage the attack in an attempt to get media attention. They testified that they fake punched him, poured bleach on him, put a noose around his neck and used racist and homophobic slurs -- because he told them to.

"Who was in charge of this thing?" special prosecutor Dan Webb asked.

Defense attorneys also called seven witnesses to testify, highlighted by Smollett himself. Over eight hours on Monday and Tuesday, he laid out his version of the incident, cast doubt on the brothers' true motivations and explained his distrust for police.

"Have you ever planned a hoax?" his attorney asked.

"Never in my life," Smollett said.

Under cross-examination, though, prosecutors contrasted his testimony with that of the brothers in an attempt to under cut his story.

After closing arguments Wednesday morning, the jury will be instructed on the law and then sent to deliberate.

The long road to trial

The trial is the culmination of a case that began when Smollett told police he was the victim of a racist and homophobic attack in January 2019. Two men allegedly attacked him, called him the n-word, put a noose around his neck, poured bleach on him and exclaimed, "This is MAGA country," according to police.

Celebrities, politicians and advocacy groups rallied behind the actor, and police poured significant resources into solving the case and locating the suspects. But after interviewing the Osundairo brothers -- who knew Smollett from the "Empire" show -- and finding other evidence, authorities instead determined that Smollett paid them $3,500 to stage the hate crime so he could get publicity and a career boost.

Smollett has repeatedly denied the allegations and his attorneys have said he paid the brothers to be his trainers.

Smollett was initially indicted on 16 counts of felony disorderly conduct in March 2019. However, Cook County State's Attorney Kim Foxx's office dropped all charges weeks later, saying he did community service, lost his $10,000 bond and was no danger to the community. He also had no previous felony convictions.

Months after the charges were dropped, a judge appointed a special prosecutor to look into the case and investigate whether Smollett received preferential treatment from the state's attorney's office. A grand jury indicted Smollett on new charges in February 2020.

The incident effectively ended Smollett's acting career. His character was written off "Empire," which ended in 2020, and though he has since directed and produced a film, he has not appeared on screen again.

Smollett still faces a civil suit from the city that demands reimbursement for the cost of investigating his reported attack. He filed a countersuit in November 2019 that eventually was dismissed.