Clocking in at under 10 minutes, this is the world's shortest international commercial flight 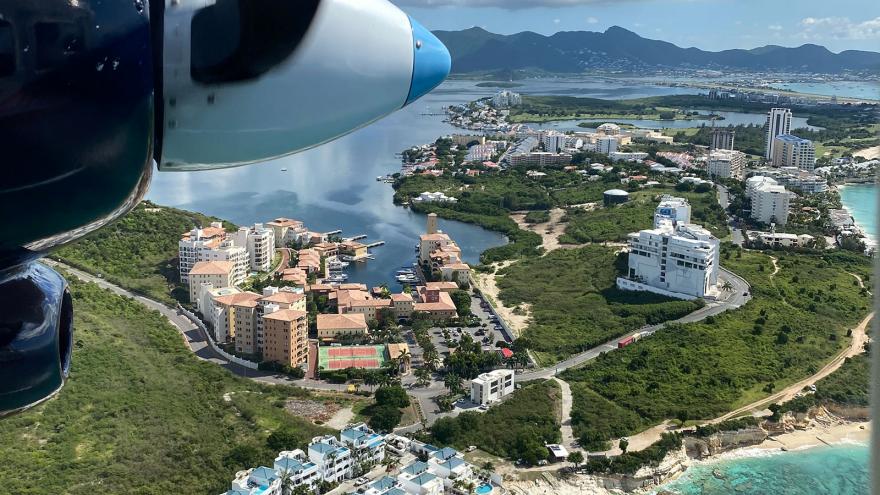 (CNN) -- There's no in-flight service. No business class cabin. No sipping Champagne, choosing beef or chicken, or watching a movie. At just eight minutes from takeoff to landing, there's no time for any of that.

There are shorter flights -- the hop from Westray to Papa Westray in Scotland's Orkney Islands clocks in at just 90 seconds -- but the flight between the Caribbean islands of Anguilla and Sint Maarten is currently the world's shortest international commercial flight.

It's a favorite of celebrities looking for a low-key place where they can be blissfully left alone. No one bats an eyelid here if they see LeBron James jumping from a rock in Little Bay or Justin Bieber singing "Sorry" on stage with local crooner Bankie Banx.

Its neighbor, Saint Martin, sits just 4.5 miles (7.2 kilometers) to the south at its closest point. Split in two, the northern part of the island is an overseas collectivity of France, while the southern part, named Sint Maarten, is a constituent country of the Kingdom of the Netherlands.

Princess Juliana International Airport in Sint Maarten has become a tourist attraction in its own right with airliners flying low over the beach to land on the island, and taking off again to equally dramatic effect. Search YouTube and you'll find multiple videos of tourists attempting to stand at the end of the runway in the face of fierce jet blasts as planes take off.

Despite clear warnings about the dangers of extreme bodily harm and death, many tourists continue to come here for the ultimate holiday brag, with people regularly getting knocked over, belongings blown out to sea and one woman being killed in July 2017.

The flight from the airport to Anguilla isn't going to give anyone the feeling of careening into the sea, though. The twin engines of the Anguilla Air Services Britten-Norman Islanders operate at a much more sedate speed.

Captain Carl Avery Thomas is owner of Anguilla Air Services -- the only airline offering scheduled flights on the route between Sint Maarten and Anguilla -- and one of the company's five pilots. He said maintaining air links is hugely important for a small island like Anguilla.

Relying heavily on tourism, most Anguillian families have at least one member working in the industry, and this short flight is crucial.

"You cannot promote a five-star destination like Anguilla without an airport," he says. "If the only way to get to this island is by boat, I don't think it would be good for our product."

Regular ferries between Saint Martin and Anguilla were suspended during the pandemic but have since resumed. Most tourists arrive on the island by speed boat from Sint Maarten, having already taken one or often two flights to get this far.

On a good day, it's a beautiful trip that takes around 25 minutes by speed boat, but when the sea is rough, it's a bumpy ride. And Thomas believes that many of visitors don't want to be "knocked about on a boat on the rough sea" on the final leg of their journey.

While the majority of passengers on the air route have typically been tourists, the pandemic has seen more Anguillians choose to fly, with special fares for locals available. With fewer touchpoints compared with the boat -- no minibus transfers between airport and pier, fewer people coming into contact with your luggage -- it has become a smoother, and in some respects, more socially distanced option.

But perhaps the biggest advantage of taking the flight is that the views are captivating from start to finish. This is as much a scenic flight as it is an important connection between two islands.

Taking off from Princess Juliana International Airport in Sint Maarten, the aircraft never flies higher than 1,000 feet, with views of turquoise Caribbean waters, the long curves of sandy beaches and luxurious private villas and resorts.

It doesn't take long to get off the ground. The plane takes off to the east over Simpson Bay Lagoon, before banking to the left, crossing over the French side of the island and the narrow strip of land along Rue de Sandy Ground, heading north to make the short hop across to Anguilla.

Crossing over the south coast, home to shallow bays with names such as Auntie Dol, LockRum and Pelican, the plane swoops low over scrubby ground around Blowing Point, the island's main -- but tiny -- port for boats from Saint Martin.

From there, it's just a couple more minutes over the salt ponds of Sandy Ground, famous for its long strip of sand and beach bars such as Elvis' and Johnno's, and low over the road until the wheels touch down at Clayton J. Lloyd International Airport, just eight minutes after departing Sint Maarten.

Beyond tourism, Thomas' aircraft play another key role that is vital in supporting this traditionally boating and fishing community.

"We provide search and rescue services free of charge to the state," he says. Whenever a fishing boat goes missing, Thomas and his team take to the air.

"We've always done it, ever since I started the company," he continues. "It's a joy when we're on a search and rescue mission and we find someone."

The aircraft are also involved in medical transportation flights and evacuations, being the only entity on the island outside of the hospital with a ventilator. "During Covid, we offer it to the hospital in case it's needed," says Thomas.

Taking to the skies

Anguilla may be dotted with some of the Caribbean's top luxury hotels and exclusive private villas, but this is not a wealthy island.

Coming from a poor family that lived in a valley at the foot of the runway, Thomas worked his way through flight training in the US Virgin Islands to cover his fees, never having flown before heading to school.

"That was the first time I'd ever sat in an airplane. It was a Britten-Norman Islander, made on the Isle of Wight in the UK," says Thomas. "I was the passenger pushed all the way into the back, but it was OK -- I was on an airplane!"

After graduating flight school in 1988, he returned home to Anguilla.

While aviation in Anguilla may still be small, with a focus on interisland hops, charters and private jet traffic, more young Anguillians are moving into the industry, including Thomas' own children.

"I have a boy and a girl, and they're both in flight school in Florida. I never encouraged them to fly, I never took them with me, because I wanted them to choose a career of their own, but both of them are going to be pilots," he says. "I hope they can continue the legacy."

In the peak holiday season, the tarmac at Clayton J. Lloyd International becomes a parking lot of private jets.

Whether Thomas' children choose to follow their father's footsteps and come back to the island or decide to spread their wings and fly further away remains to be seen.

But the eight-minute flight between Anguilla and Sint Maarten will remain an important link between these two neighboring territories and a vital part of this small island's aviation heritage.