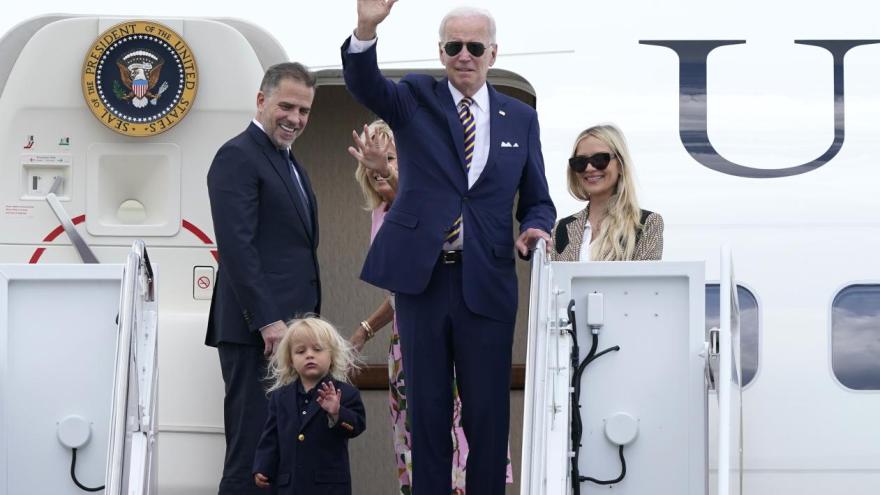 President Joe Biden, waves as he is joined by, from left, son Hunter Biden, grandson Beau Biden, first lady Jill Biden, and daughter-in-law Melissa Cohen, at the top of the steps of Air Force One at Andrews Air Force Base, Maryland, August 10. The Biden family are heading to South Carolina for a week-long vacation on Kiawah Island.

(CNN) -- With less than three weeks to go until the federal student loan repayment pause expires, millions of borrowers are still in the dark about whether President Joe Biden will extend the current payment moratorium or possibly forgive any of their debts.

Borrower balances have effectively been frozen for more than two years, with no payments required on most federal student loans since March 2020 -- when the coronavirus pandemic sent many Americans into lockdown. During this time, interest stopped accumulating and collections on defaulted debt have been on hold.

Now, as borrowers' fates hang in the balance, the President is set to spend several days on a long-awaited vacation. And the Biden administration has not sent any public signals to suggest they'll announce a student loan decision while he's away.

Officials from the White House Domestic Policy Council, National Economic Council, Office of Public Engagement and Office of Political Strategy and Outreach were slated to attend. And Biden, who traveled to South Carolina to begin his vacation on Wednesday, did not participate in the meeting.

Politico was the first to report on the meeting.

As the payment pause deadline nears, Natalia Abrams, the president and founder of the Student Debt Crisis Center, called on the President to meet with borrowers.

"We've seen the same reports. ... The meeting states that it was with White House officials, organizations and advocates, but what we feel was missing is that we have yet to see the administration and President Biden have a meeting with borrowers themselves," Abrams said.

Biden has already extended the pause four times and has repeatedly argued that it was necessary to allow borrowers to get back on their feet. In April -- when he last extended the repayment pause -- he said that though the economy had gained strength, the country was "still recovering from the pandemic and the unprecedented economic disruption it caused."

Democratic lawmakers and advocates have been calling on Biden to broadly cancel up to $50,000 in student loan debt per borrower, but the President has said he would not consider that number.

Along with potentially extending the pause, the White House has suggested Biden is considering canceling $10,000 per borrower, excluding those who earn more than $125,000 a year.

"We haven't made a decision yet. ... The Department of Education will communicate directly with borrowers about the end of the payment pause when a decision is made," White House press secretary Karine Jean-Pierre told reporters on Tuesday. "When it comes to the cancellation ... the President understands firsthand the burden that a student loan has on families ... and so we're just going to continue to assess our options for cancellation."

Jean-Pierre emphasized that Biden will have something to announce "before August 31."

With only three weeks until student loan servicers are scheduled to resume collecting federal student loan payments, Biden and his team are cutting it close. Normally, loan servicers send out billing statements at least 21 days before a payment is due, but those haven't gone out yet since Biden is still making up his mind.

"For many weeks, there's been no change in the guidance from the Department of Education. Servicers have been told to hold off on sending out any communication about the resumption of payments," said Scott Buchanan, executive director of the Student Loan Servicing Alliance, a nonprofit trade group whose members are responsible for servicing over 95% of all federal student loans.

While Biden didn't announce a decision on student loans announced before he ditched Washington for the beaches of South Carolina on Wednesday, he's riding into his vacation on the headwinds of a few successful and chaotic weeks at the White House.

Over the course of the last three weeks, Biden has dealt with a case of Covid-19 and a subsequent rebound, he signed into law two major bipartisan pieces of legislation, he gave the green light on the targeted killing of the man who succeeded Osama bin Laden as leader of al Qaeda, and the Senate managed to pass a slimmed down version of his landmark climate and health care bill.

Meanwhile, despite concerns last month about the prospect of a recession, national unemployment numbers defied economists' expectations, gas prices have continued to go down in the last several weeks and heightened inflation eased in July. However, Americans are still paying more for everyday items like food, gas and vehicles than they're used to, leaving less room in their budgets.

A majority of Democrats in a May CNN poll (56%) -- and an even wider majority of self-described liberals (69%) -- say the government is doing too little on student loan debt, according to the CNN poll, while only a third of Republicans and self-described conservatives alike say the same. Seventy percent of adults younger than 35 say the government is doing too little, a figure that drops to 50% among those in the 35-49 age bracket, and 35% among those age 50 or older.

Continuing the forbearance or canceling debt could deliver financial relief to borrowers. But broad student loan forgiveness would also shift the cost -- likely hundreds of billions of dollars -- to taxpayers, including those who chose not to go to college or already paid for their education. Loan cancellation could also add to inflation while doing nothing to address the root of the problem: college affordability.

And the President, so far, has failed to get most of his college affordability proposals approved by Congress. The latest iteration of his proposed social safety net bill, called the Inflation Reduction Act, was approved by the Senate this month and now heads to the Democrat-controlled House of Representatives for a vote. But the bill does not contain previously proposed provisions that would have lowered the cost of college.

Outside of the payment pause and an executive action to broadly cancel student loan debt, there are several other ways many of the 43 million federal student loan borrowers may qualify for some student loan forgiveness. Targeted debt forgiveness programs already exist that help public sector workers and borrowers who were defrauded by their for-profit college, for example.

And under Biden, some of these programs have been temporarily expanded, making it easier for some borrowers to qualify for forgiveness. The administration has approved more than $26 billion in targeted cancellation for over 1.3 million borrowers -- more than under any other president.