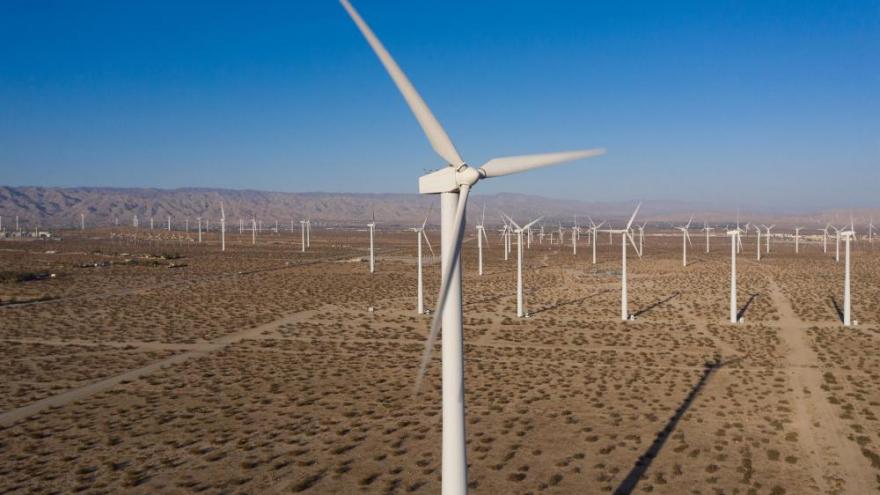 The climate measures in the budget bill could cut nearly 1 billion tons of emissions per year by 2030, an analysis finds. Pictured are turbines at the San Gorgonio Pass wind farm in Whitewater, California.

It would be comparable to removing all passenger vehicles from the road, or the yearly greenhouse gas emissions of Texas and Florida combined, according to the analysis.

"This is a really big deal," Rhodium Group Director John Larsen told CNN. "It would be the single largest action the federal government's ever taken to deal with climate change."

Rhodium's findings are consistent with other analyses that have showed the biggest reductions would come from a combination of Democrats' clean electricity program and tax credits for clean energy, like wind and solar.

Out of the six measures the group analyzed, Rhodium estimated a combination of the clean electricity program, tax credits and funding for rural electric cooperatives would have the largest impact on US emissions, accounting for up to 715 million tons per year.

Rhodium's analysis found that if utilities hit that minimum increase each year, the power sector would achieve a 73% clean share in 2030, just short of President Joe Biden's 80% goal.

"There's no reason why any utility wouldn't get paid to overachieve," Larsen told CNN. "If I do better than 4% per year, you could actually get paid for even more of doing the right thing. I think between the tax credits and the [clean electricity program], it's a no-brainer for utilities to meet these goals."

All these programs combined could make a significant dent in US emissions, but Larsen told CNN it's too early to say definitively whether the total budget package will hit Biden's decarbonization target of 50% to 52% below 2005 levels by 2030.

Rhodium estimated there's an approximately 1.7 billion- to 2.3 billion-ton gap between where greenhouse emissions will be under the current US trajectory and where they'd need to be in order to meet Biden's 2030 goal.

"We estimate that this could close about half the gap between where the US is likely to be and where it needs to be to hit the target," Larsen told CNN, adding that gap could shrink if Congress goes even bigger with its investments.

Climate provisions make up about one-fifth of the overall $3.5 trillion budget bill, environmental groups have estimated. The clean electricity program as written costs about $150 billion over 10 years, while clean energy tax credits account for about $253 billion over the next decade.

CORRECTION: This story has been updated to correct John Larsen's title. Larsen is a director at Rhodium Group.