Cleveland's plans to drop 'Indians' from team name is a welcome change but it's long overdue, Native Americans say 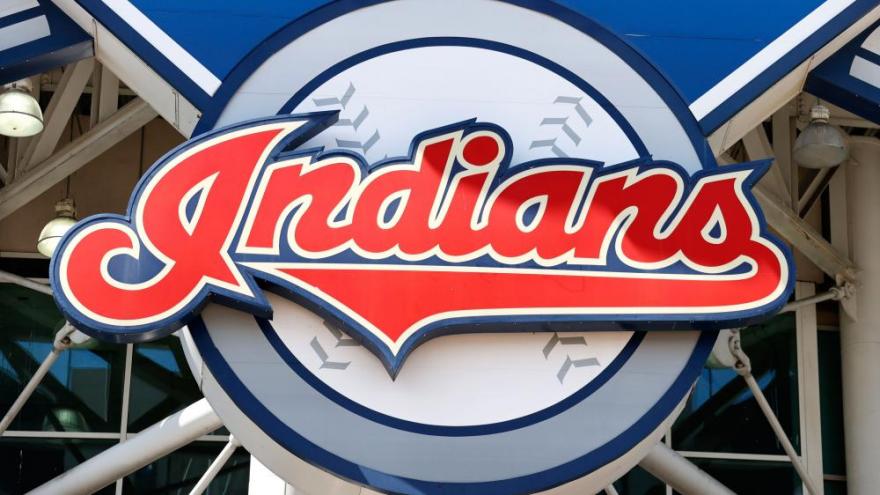 The Cleveland Indians team logo on the main sign outside Progressive Field on July 12, 2020 in Cleveland, Ohio.

(CNN) -- A Major League Baseball team's decision to remove "Indians" from its name is being hailed as historic, but Native American advocacy groups insist their fight to remove all racist sports mascots is far from over.

Philip Yenyo, the executive director of the Cleveland-based American Indian Movement of Ohio, said he's confident that other teams will follow the franchise's example once they watch the name change process play out. Yet, the team will continue using the existing name and branding through the 2021 season until a new one is chosen.

The Cleveland team's decision would make it the second professional sports team this year to announce plans to remove a name that has drawn criticism from Native Americans for decades. The move is part of a larger cultural shift across the US as corporate brands are reexamining their use of racist caricatures and stereotypical names.

Monday's announcement by the team's owner, Paul Dolan, comes after the franchise started having discussions with Native American groups, researchers and civic leaders over the summer. And while the talks came as the country was in the midst of a racial reckoning, some activists say their efforts to change team names have been increasingly bolstered by research that shows most Native Americans are offended by the team names.

"This is a large step in the right direction," Yenyo told CNN. "This fight isn't over, this is just one team."

Yenyo said he was relieved when the Indians team owners invited him to meet with them this summer. In the past, Yenyo said the team had ignored his protests.

Yenyo has spent the last 30 years leading protests outside Cleveland Indians games, often carrying a megaphone or poster that denounced the team's name.

"I had prayed for a very long time for this day to come," he said.

The "Indians" name was chosen by the team and a group of baseball newspaper writers in 1915.

Though the exact story of its origin is unclear, the name was partly based on the contemporary success of the Boston Braves, who won the 1914 World Series, as well as on Louis Sockalexis, a former Native American baseball star in Cleveland who died in 1913, according to Cleveland Magazine.

Cleveland's announcement also comes two years after it removed the "Chief Wahoo" logo, a racist caricature of a Native American character, from their uniforms following the 2018 season.

A study conducted in 2019 by the University of Michigan and University of California, Berkeley found that 65% of Native youth are highly offended and opposed to Native mascots and that 70% of Native people were offended by fans in Indian headdresses.

The change won't be immediate

Cleveland's team owner said the franchise will continue using the "Indians" name and branding until it decides on a new mascot.

Though Cleveland won't immediately remove Indians from the team name, Yenyo said he is still pleased the team made the commitment.

"I understand that it's going to take time, it's part of the process," Yenyo said. "And we have been patient."

Crystal Echo Hawk, executive director and founder of IllumiNative, told CNN that Monday's decision to drop the name was long overdue. She hopes other sports teams, and the thousands of schools with Native American mascots, will follow Cleveland in making the change.

"This is just another extraordinary win for Native people and I think for everyone in our fight against systemic racism," Echo Hawk said. "These racist native sports mascots fuel racism and cause psychological harm to Native American children."

Although Monday's announcement is considered a win, Echo Hawk said the continued use of the Indians name through the 2021 season is a reminder that her fight to eliminate all racist team names is not over.

"We will not rest until every professional, collegiate, and K-12 sports teams acknowledge the harm done to our Native youth and join us in ending systemic racism against Native peoples," Echo Hawk said.

Images of Natives Americans as mascots began in the golden age of film, Vincent Schilling, a Mohawk journalist who has covered sports and writes on Native American culture, told CNN earlier this year. Stereotypes of Native Americans as "savages," stories about killing settlers, and so on -- those depictions became popular and made money. So, they kept getting made.

"And we learn most from television," he said.

Native American characters get scant representation in the entertainment we consume. At most, only about 0.4% of characters depicted on prime-time TV and popular movies are Native American, according to IllumiNative, a nonprofit dedicated to increasing the visibility of native people in society. When people are presented with such limited perceptions, racist and stereotypical depictions are all some Americans may know about their native neighbors.

Echo Hawk, told CNN earlier this year that many schools don't teach about Native Americans past 1900.

This lack of representation -- in pop culture, in education and in the general American consciousness -- can lead to an erasure of Native American people and experiences.

And while the fight continues, some Native American leaders are hopeful and say that this year forced corporations to seriously consider getting rid of offensive names and images.

Ray Halbritter, Oneida Nation Representative and leader of the Change the Mascot campaign, said he was pleased that sports team names were being changed amid this year's awakening on racism. Native Americans have been "exploited" for profit by sports franchises for too long, he said.

"Sports is such an incredible cultural power in this nation and in the world and it needs to inclusive," Halbritter said. "I hope and look forward to a broader discussion in this country about these mascots and include the affected people."