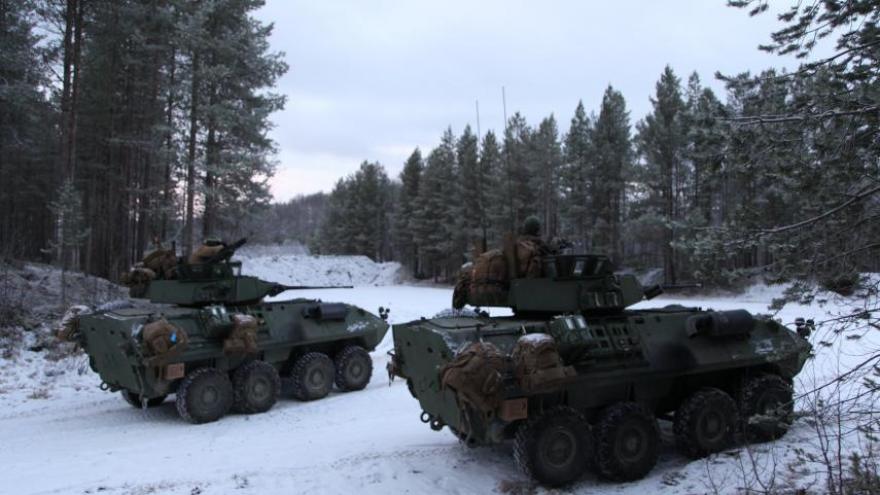 A classified US military war game is set to take place as concerns about threats posed by China and Russia increase.

(CNN) -- The "enemies" will have fictional names, but when hundreds of US military personnel around the globe log on to their computers later this summer for a highly classified war game, it will be clear what a major focus of the scenarios will be -- how the US should respond to aggressive action and unexpected moves by China and Russia.

Several defense officials tell CNN that the war game is a top priority for the chairman of the Joint Chiefs of Staff, Mark Milley, who will lead the exercise. Defense Secretary Lloyd Austin will be briefed as it plays out.

The war game is designed to equip the US military's top leaders to deal with a fictional global crisis erupting on multiple fronts and players will have to deal with constantly changing scenarios and compete for military assets like aircraft carriers and bombers.

They will take place at a crucial time for the Pentagon just months into Joe Biden's presidency.

The military budget is being set and major decisions on troop levels and priorities are being made so it's hoped the war game will help prepare the military to face the challenges of the next few years.

War games are always sensitive and outcomes are closely guarded because they can reveal shortfalls in US military plans and operations. One former defense official confirmed that in a recent exercise gaming out a conflict against major adversaries like Russia and China, "we found the Blue Team, the US and allies, kept losing."

The scenarios covered in the game this summer will reflect real life possibilities. Those could include major cyber attacks, a Russian advance in the Baltics, further militarization of the Arctic by Moscow or China flexing its muscles in the South China Sea or even invading Taiwan.

And preparations aren't just virtual. This week, the US and Canada have been carrying out military exercises, in tough conditions where temperatures can plunge to -20 Fahrenheit, to make clear they are ready to push back against Russian military advances in the resource rich Arctic.

Russia has put advanced missiles in the region to protect its bases there and is directly challenging the US. In 2020 more Russian aircraft flew near US airspace off Alaska than at any time since the end of the Cold War, according to the North American Aerospace Defense Command with multiple flights of heavy bombers, anti-submarine aircraft, and intelligence collection planes.

For NORAD, the US and Canadian command overseeing the exercise, a key priority is "being able to track and then defeat" potential Russian military activity in the Arctic, Canadian NORAD Region Commander, Major-General Eric Kenny, told CNN.

Concerns about Russian and Chinese activity are increasing and there are no signs of tensions abating since Biden took office.

"Russia and China military modernization creates some serious potential operational challenges for the US," Eric Edelman, a former defense undersecretary for policy and expert on military planning, told CNN.

Both nations are expanding their ability to operate in wider areas in Europe and Asia meaning the Pentagon could be forced to send US forces thousands of miles away. "Russia and China are playing a home game, we are playing an away game," Edelman said.

At the same time the rhetoric from the Biden administration is heating up. Secretary of State Anthony Blinken called out Russia for "reckless and adversarial actions" at a NATO meeting in Brussels this week and observed that Moscow has "built up a forces, large scale exercises and acts of intimidation, in the Baltic and Black Sea."

And on China, Deputy Defense Secretary Kathleen Hicks pulled no punches in a speech earlier this month. "Beijing has demonstrated increased military competence and a willingness to take risks, and it has adopted a more coercive and aggressive approach," she said before adding that Beijing's actions "constitute a threat to regional peace and stability, and to the rules-based international order on which our security and prosperity and those of our allies depend."

There is no indication the tough words are tamping down Russian President Vladimir Putin and China President Xi Jinping's plans to strengthen their militaries to ensure they are capable of challenging the US and its allies. Austin, in the coming weeks, "will focus on deterrence" improvements to counter adversaries, a senior defense official told CNN.

Top commanders are increasingly blunt about both countries, especially on nuclear modernization.

Russia is upgrading bombers, intercontinental ballistic missiles, submarine launched ballistic missiles and warning systems, "in short, its entire strategic force structure," wrote Admiral Charles Richard, head of the US Strategic Command in a recent article in the Proceedings of the US Naval Institute journal. Moscow is also building hypersonic weapons that travel more than five times the speed of sound, and nuclear-powered torpedoes, capable of reaching US shores quickly.

Richard warned that China is about to become a nation with a full nuclear triad, with an inventory of nuclear capable missiles, submarines and soon a long-range bomber.

"While the PRC has maintained a "No First Use" policy since the 1960s—contending it will never use a nuclear weapon first—its buildup of advanced capabilities should give us pause. This policy could change in the blink of an eye. Beijing is pursuing capabilities and operating in a manner inconsistent with a minimum deterrent strategy, giving it a full range of options, including limited use and a first-strike capability," he wrote.

The US military is doing substantive planning for the challenge from Russia and China, with billions of dollars of spending planned on modernization in both the nuclear and non-nuclear arena if its wins Congressional approval.

The US is also looking to send a clear message to Beijing amid concerns about Taiwan as China has increased aircraft and shipping activity near the island.

"Taiwan is clearly one of their ambitions," Admiral Philip Davidson, head of the Indo Pacific Command, told Congress earlier this month. "The threat is manifest during this decade, in fact, in the next six years." Admiral John Aquilino, who has tapped to replace Davidson told the Senate Armed Services Committee on Tuesday, "My opinion is this problem is much closer to us," adding that the US needs to field weapons and capabilities to deter China "in the near term and with urgency."

In response to Russian advances in eastern Europe, the US and NATO allies are increasing their own presence. But it's not enough, warns David Ochmanek, a senior RAND Corporation analyst and former deputy assistant secretary of defense for force development. "The US and its allies do not have sufficient combat power," he told CNN. The reality he says is "within 48 to 60 hours Russian forces could be on outskirts of a Baltic capital," once it pre-positions forces.

US military experts say this underlines why war games like the upcoming summer exercise are so important to ensure the military can practice and plan ahead before a crisis hits.