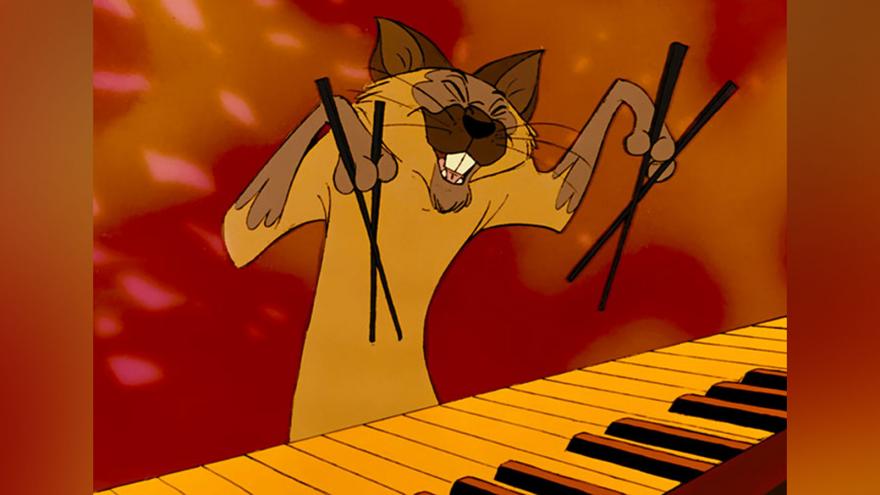 "As part of our ongoing commitment to diversity and inclusion, we are in the process of reviewing our library and adding advisories to content that includes negative depictions or mistreatment of people or cultures," Disney said in a statement online.

"Rather than removing this content, we see an opportunity to spark conversation and open dialogue on history that affects us all," it added.

The 1955 animated comedy "Lady and the Tramp" carries an advisory because of its depiction of Siamese cats in a way that perpetuates anti-Asian stereotypes.

Disney says the advisory is not new, but it has now been updated and strengthened for this and other films.

Last year, CNN reported that Disney had issued a warning on some movies, such as "Dumbo," that they featured "outdated cultural depictions."

At that time, the description of these films in the streaming service's menu included a warning that "this program is presented as originally created. It may contain outdated cultural depictions."

Now, once viewers press play, they see the following message, which cannot be fast forwarded: "This programme includes negative depictions and/or mistreatment of people or cultures. These stereotypes were then and are wrong now. Rather than remove this content, we want to acknowledge its harmful impact, learn from it and spark conversation to create a more inclusive future together."

"Disney is committed to creating stories with inspirational and aspirational themes that reflect the rich diversity of the human experience around the globe."

Viewers are then directed to a page on the company's website headlined "Stories Matter," which explains the revised policy.

The site highlights some of the films that carry the advisory, explaining why they have been selected.

Of the 1970 film "The Aristocats," it says: "The cat is depicted as a racist caricature of East Asian peoples with exaggerated stereotypical traits such as slanted eyes and buck teeth. He sings in poorly accented English voiced by a white actor and plays the piano with chopsticks. This portrayal reinforces the 'perpetual foreigner' stereotype, while the film also features lyrics that mock the Chinese language and culture.

"Dumbo," released in 1942, includes a warning because of the crows, which "pay homage to racist minstrel shows, where white performers with blackened faces and tattered clothing imitated and ridiculed enslaved Africans on Southern plantations."

It adds: "The leader of the group in Dumbo is Jim Crow, which shares the name of laws that enforced racial segregation in the Southern United States. In 'The Song of the Roustabouts,' faceless Black workers toil away to offensive lyrics like 'When we get our pay, we throw our money all away.'"

"Peter Pan," which hit movie theaters in 1953, "portrays Native people in a stereotypical manner that reflects neither the diversity of Native peoples nor their authentic cultural traditions."

Among the other films highlighted are "The Jungle Book," "Fantasia," live-action movie "The Swiss Family Robinson" and "Aladdin," which was made as recently as 1992.

Disney is not the first studio to add an advisory on old titles that feature racist attitudes or other troubling content.

For example, Warner Bros., which is owned by CNN's parent company, WarnerMedia, used this advisory on an old "Tom and Jerry" release: "The cartoons you are about to see are products of their time. They may depict some of the ethnic and racial prejudices that were commonplace in American society. These depictions were wrong then and are wrong today. While these cartoons do not represent today's society, they are being presented as they were originally created, because to do otherwise would be that same as claiming these prejudices never existed."