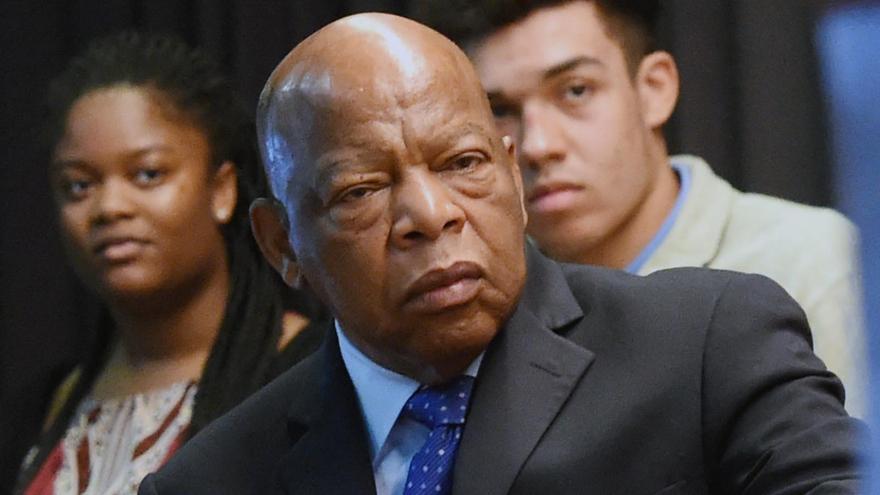 Civil rights icon and US Democratic Rep. John Lewis of Georgia has been diagnosed with stage 4 pancreatic cancer, his office announced Sunday.

(CNN) -- Civil rights icon and US Democratic Rep. John Lewis of Georgia has been diagnosed with stage 4 pancreatic cancer, his office announced Sunday.

Lewis, 79, said he was diagnosed following a routine medical visit with subsequent tests that reconfirmed the diagnosis. The long-time Georgia congressman will undergo treatment for the cancer.

"I have been in some kind of fight -- for freedom, equality, basic human rights -- for nearly my entire life. I have never faced a fight quite like the one I have now," Lewis, who in March 1965 joined forces with Martin Luther King Jr. to lead a voting rights march out out Selma, Alabama, said in a statement.

He continued later: "While I am clear-eyed about the prognosis, doctors have told me that recent medical advances have made this type of cancer treatable in many cases, that treatment options are no longer as debilitating as they once were, and that I have a fighting chance."

Pancreatic cancer was the third-leading cause of death from cancer in the United States in 2018, after lung and colorectal cancers, according to the National Cancer Institute. The cancer, on average and across all stages, has a five-year survival rate of 9%, according to the American Cancer Society.

But Lewis, who is in his 17th term as a member of Congress, is vowing to continue his work, stating that he'll return to Washington in the coming days to begin his treatment plan, which will last several weeks.

"I may miss a few votes during this period, but with God's grace I will be back on the front lines soon," he said.

Lewis has represented Georgia's 5th Congressional District, which includes much of Atlanta, since first being elected in 1986.

A leader of a civil rights group called Student Non-Violent Coordinating Committee, he was one of the participants in the key 1965 civil rights protest pushing for voting rights from Selma to Alabama's capital, Montgomery. Lewis -- who had his skull broken by white police officers during the march across the Edmund Pettus Bridge in Selma -- was, by his own count, arrested more than 40 times during his days of civil rights activism.

"So I have decided to do what I know to do and do what I have always done: I am going to fight it and keep fighting for the Beloved Community. We still have many bridges to cross," Lewis said Sunday.

News of Lewis' diagnosis shook Washington Sunday, prompting an outpouring of support. House Speaker Nancy Pelosi told Lewis in a tweet that "we are all praying for you following this diagnosis."

"John, know that generations of Americans have you in their thoughts & prayers as you face this fight. We are all praying that you are comfortable," Pelosi, a California Democrat, said. "We know that you will be well."

Former President Bill Clinton echoed the same sentiment, tweeting, "If there's anyone with the strength and courage to fight this, it's you, John. Hillary and I love you, and we join with millions of other Americans in praying for you and your family."

And former President Barack Obama -- who in 2011 presented Lewis with the Presidential Medal of Freedom, the country's highest civilian honor -- wrote: "If there's one thing I love about (Rep. John Lewis), it's his incomparable will to fight. I know he's got a lot more of that left in him. Praying for you, my friend."

In recent years, Lewis has drawn headlines for stirring up what he calls "good trouble" for his vocal opposition to President Donald Trump -- including voting to impeach the President earlier this month.

In July, he offered a forceful rebuke of Trump's racist tweets against four Democratic congresswomen of color.

"It sows the seeds of violence and destroys the hopes and dreams of people. The world is watching. They are shocked and dismayed because it seems we have lost our way as a nation, as a proud and great people."