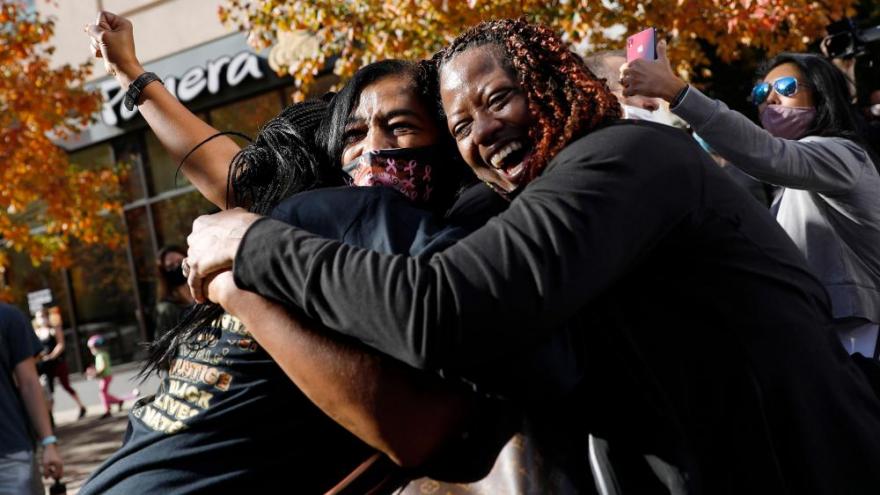 (CNN) -- President-elect Joe Biden's victory over President Donald Trump sparked celebrations in cities across the country, including many of the places that swept Biden into the White House.

From New York to Miami in the East and Denver and Austin out West, Biden supporters flooded into the streets after CNN and other news organizations projected Biden as the winner Saturday morning, honking horns, cheering, dancing and popping champagne.

In Washington, DC, a crowd packed into the streets in front of the White House at Black Lives Matter Plaza, within seconds of the race being called. The streets nearby filled with people shouting, banging pots and pans, and singing, "Nah nah nah nah, hey hey hey, goodbye."

The celebratory crowd in the blocks around the White House created a traffic jam, with people sitting on top of cars and drivers holding their fists out the window. One person wearing an American flag as a cape walked toward Black Lives Matter Plaza with a hand-written posterboard that read, "The nightmare is over."

The packed crowd outside the White House later sung "YMCA," the song Trump used to close out his rallies down the homestretch of the campaign.

Trump, however, was not at the White House on Saturday morning -- he was at his golfing at his club in Virginia when CNN and other networks called the race.

Both Biden and Trump supporters gathered at the club's entrance and lined the road leading up to it. "You're fired," read the sign of one Biden backer. Vehicles with Trump flags drove back and forth, and one person shouted, "Media sucks."

In Philadelphia, which was key to Biden's decisive Pennsylvania win, cars honked, people waved Biden flags and a large crowd gathered outside of Philadelphia's City Hall. It was unseasonably warm, and people were pouring into the streets with everything from coffees to brunch cocktails. Most were wearing masks.

"Biden town!" a woman yelled out of a car headed down Broad Street in the city's downtown area. There was a constant stream of cars driving by honking, with people fist-pumping out the windows.

Chris Halt, his wife Deb and their dogs Jelly and Donut were driving through the city in an old Volkswagen bus with a Biden sign hanging off the car. "People were saying it's a peaceful protest. No, this is a joyous celebration,' Chris Halt said.

Robert Nunez, riding in his car with his family, stood through the sunroof yelling in celebration. "The four-year nightmare is over," said Nunez, who said he cried when he found out the Trump presidency was coming to an end.

Adrienne Register, a school psychologist from New Jersey, and her 16-year-old daughter, Arianna, joined the celebration outside City Hall in downtown Philadelphia. She said she remembers the exact time -- 11:26 a.m. -- that a friend texted her to tell her the news.

"We're ecstatic," Register said. "It's been a scary few days."

She said the last few days of waiting for results were "anxiety-provoking" and she didn't get a lot of school work done.

Her fellow law student, Daniel Gordon, 24, chimed in, "I was praying not to get cold-called in class."

A chorus of horns filled Broad Street, right outside of the Pennsylvania Convention Center. As morning turned into afternoon, the once quiet street, which only saw occasional joggers and people going for coffee or bunch was soon filled with horns and groups of people erupting in cheers.

"I'm so happy. I don't know what to do," said one woman near the Convention Center, with tears streaming down her face.

At a red light, a man in a hatchback honked his horn and screamed, "We made America great again!" Another person drove by blaring "Philadelphia Freedom" from his car.

In New York City, a crowd gathered outside of the Trump International Hotel and Tower, chanting: "No More Trump!" In Times Square, a man was playing "Hail to the Chief" on the trombone.

A crowd gathered around the Barclays Center in Brooklyn, while Grand Army Plaza was essentially shut down to traffic as hundreds of people mostly in masks stood in the street with Biden-Harris signs, American flags, and homemade signs with slogans like, "Best Break Up Ever." A drums and horns band played under Grand Army Plaza's famous arch.

Senate Minority Leader Chuck Schumer joined the crowd that gathered outside the Barclays Center in Brooklyn, holding up a Biden-Harris sign. Brooklynites cheered and waved to each other walking on the street, some playing portable speakers with songs like "Celebration."

In Chicago, growing crowd gathered to celebrate outside Trump Tower. There was cheering and ringing bells while cars honked driving by, some people hanging out their car windows with Biden-Harris signs. People began popping champagne.

A crowd also gathered at Freedom Park in Atlanta. Olivia Buckmon, a Dekalb, Georgia, resident, said she screamed when she heard the news this morning, saying she didn't think Georgia would turn blue "until Stacy Abrams," who nearly won the governorship in 2018. While people sipped champagne and danced in the streets, "God Bless the USA" -- another Trump campaign song -- was played.

In Austin, a Democratic stronghold in the middle of red Texas, revelers waved a Biden 2020 flag in front of the state Capitol. Trump supporters were gathered on the other side of the street with Trump flags and signs.

While Biden did not win Florida, his supporters flocked to Cafe Versailles, the heart and pulse of the Cuban-American community in Miami, which is credited for keeping Florida red for Trump. The restaurant became the go-to place for Biden supporters to honk their horns and hold up their fists out their windows.

"Gano Biden," or "Biden Won," screamed another man who made several drives around Cafe Versailles. During his second drive by he screamed, "Arriba la democracia" with his fist stretched out of his window. It translates to "Up for democracy."

Out West, Denver residents Skyler and Ainsley Tarr popped a bottle of champagne to celebrate on their porch.

"We are elated. Democracy is saved," Skyler Tarr said. "We're back baby. It's a good day."

Outside Biden's headquarters in Wilmington, Delaware, a crowd was quickly growing beyond the security perimeter. There were people of all ages cheering, singing and honking their horns, and the crowd joined together to sing "God Bless America."